Daniel Snaith, also known as Caribou, formerly known as Manitoba, reportedly chose his most recent moniker while on an acid trip with friends in the Canadian wilderness.

It's fitting, then, that Caribou's live show is a pretty good representation of what such a trip might sound and look like. On record, Caribou is meticulous, experimental, and dreamy, but in concert the psychedelic juices flow like a raging river. 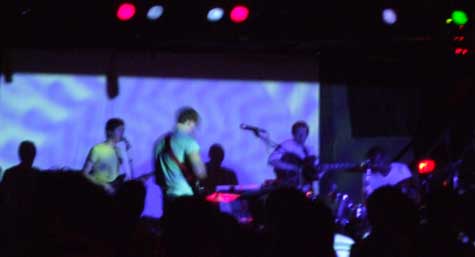 Stationed in front of a large white screen and constantly drenched in waves of trippy video projections, the band burst forth with caterwauling, pummeling rhythmic excursions, complete with hypnotic, mind-melting melodies on top. Alternately performing on drumset, guitar, keyboard, sampler, and some sort of strange electronic wind instrument, Snaith was flanked by a trio of drums, bass, and guitar. At the Cat's Cradle, a venue notorious for unannounced band member absences, the drummer was a replacement - the regular drummer had a nasty accident and was unable to perform. Nothing was lost, however, as the stand-in stickman seemed to drive the band as purposefully as possible, and his animated style made him the focus of the stage for most of the night.

Snaith has recently wandered farther into the realm of vocal songcraft, and while the songs work wonderfully on the must-have Andorra album, the vocal bits didn't really come across in concert and didn't mesh perfectly with the over-the-top chaos of their inspired instrumental work. When they got rolling, however, this show absolutely sizzled. Black-frame glasses were melting across the venue as the young hipster crowd got a dose of the psychedelic abandon that Andorra only hints at. There were recognizable melodies, like the single "She's The One," but for the most part Snaith and his mates constructed a sweaty swath of drum-heavy rock that hung in the humid air like thunderclouds. Seemingly trekking through the outer limits of space most of the time, the band would impress by stpping perfectly at waypoints that seemed not to be there at all, changing melodies at others, gleaning their rigid attention in part from Snaith's well-documented mathematical background (oh yeah, this guy's one of a kind - His 2005 mathematics Ph.D. thesis was titled Overconvergent Siegel Modular Symbols). 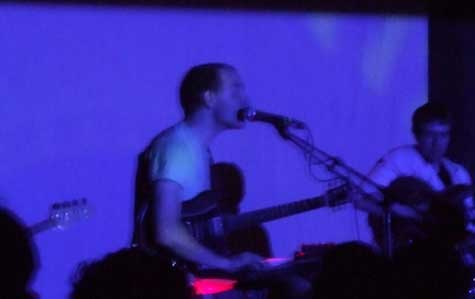 The video projections, timed perfectly with the music, ranged from stark black and white spiral patterns to wild kaleidescopic meltdowns, shifting colored squares and reverberating waves of hallucination. Shadows were thrown and caught in flashes of brilliant white light, helping the band bring their trippy, bombastic visions to vivid life. I was actually suprised at the relative youth and "indie-ness" of the crowd, as this was one of the most overtly psychedelic concerts I have attended. The atmosphere was a blend of the primal, ballistically melty acid rituals of the 1960's and the menacing digital psychosis of the new millenium. The music shares similar qualities, as it has modern influences like the epic, cinematic sprawl of post rock and trance music along with time-tested qualities like wailing rock guitars and rhytmic overload.

The feeling of being sucked into a vortex of color and sound was prevalent on this night in Carrboro, but the freaks were noticeably absent. Caribou is no secret to indie-rock kids and electronic music devotees - will the masses of psychedelic music fans stand up and take notice, or do they even go out anymore?

-Words and Photos by Bryan Rodgers 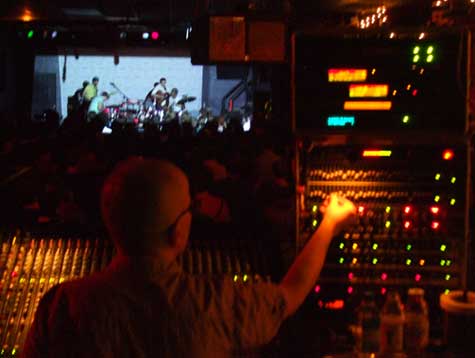