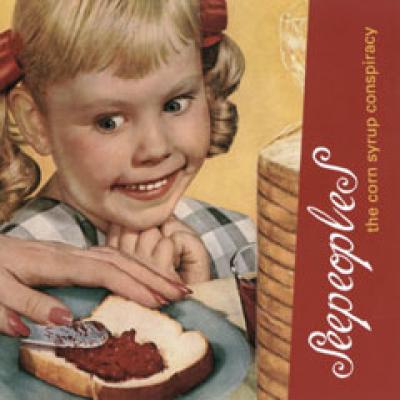 Just a guess here: tens of thousands of independently produced CDs are released into the world every year. NOT a guess: most of them are, well, really bad. Some are OK, some are hilarious, and some are good. And some are the kind that become staples in your CD player, and you can't believe such a great album was produced by a band you've rarely heard of. That's what we have in The Corn Syrup Conspiracy, the second effort from Portland, ME outfit Seepeoples.
Primarily the brainchild of multi-instrumentalist and songwriter Will Bradford, Seepeoples turned some heads on the music scene with their debut disc, For The Good Of The Nation. The lengthy, diverse structures of that album's few songs form music that has an inherent exploratory nature. The same is true with The Corn Syrup Conspiracy, but Bradford's ideas have become much more realized and his wealth of songs take center stage instead of stretchy jams.

Full to the digital brim at over 72 minutes, The Corn Syrup Conspiracy has a lot offer for any music fan. While such length may be long-winded to some, it really isn't without justification. There's a strong political theme to the album's wide range of songs, and both keep the disc charging along at a highly enjoyable pace. The urgent lyrics and morphing music keep you on the edge of your seat in anticipation of the sound's next move.

With so much music on one album, there's a lot of different textures and attitudes to be found here, all of them pleasureable, and some hit your brain harder than others. The muscular electro-rock instrumental "Dog Days" jumpstarts the album with driving rock riffs and pummeling bass. The first lyrics of the album really set the tone for the sometimes sarcastic, negative outlook that Bradford has toward society and government: "Eat. Sleep. Breathe. Eat. Sleep. Work til you drop". The dreamy drama that makes this album so amazing is apparent from the get go.

Grandiose drums and a wriggling rock guitar propel the anthemic "The Way the World Will Fall", and the song's catchy chorus settles between the verses in an oh-so-satisfying manner. "Dinosaur" is one of the best tracks here, as a bouncy pop intro veils morose lyrics before the song repeatedly dissolves into its atmospheric hook. With robust backing vocals and oceans of acoustic guitar, this song is impossible to resist. This gives way to the frenetic flight of "Butchers", a sped-up, dub-tinged journey into righteous rasta proclamations about the evil powers that be. This is possibly the most upbeat track on the disc, and one of the most outstanding. Bradford's skill with word-wrangling is unmatched here.

Solemn acoustic guitar and piano start the opus "Send Me A Line", which eases into a melancholy wave-tossed groove layered with synthetic swooshes. At this point, it becomes clear that this is not just another album. The effect of the music is clearly felt at this juncture in the journey. Bradford's alternately urgent and soothing voice has an audience with your brain for good. By the time the delicious ending refrain seeps into you psyche, it's like your ears are being fed the sweetest treats on earth.

The spacey twinkle of "Everything Goes Away" brings to mind the desperate tones of Pink Floyd's "The Wall" a la "Goodbye Blue Sky", internal struggle and desperation intact. Hypnotizing the listener with sparse instrumentation and breathy vocals, the song moves nicely into an ambient space-pop section that rises and falls as steadily as the chest of a sleeping child.

"Dog Days II" sort of separates the disc into halves. This instrumental rides a steady bass and drum groove and embellishes with an over-the-top synthesizer solo and electronic horns. The ability of the band to create tangible lanscapes using samples is evident here. Gratuitous use of E-Drums gets the next track, "Sleeping Soul" going in a righteously funky direction. Bradford skims the bubbling surface of the sound with spooky harmony vocals. Over and over during the course of this album, the vocals far exceed normal expectations, adding much more than just words.

Cinematic sounds of chainsaws and sirens give way to the woozy horns and loping tempo of "Man Will Win" as Bradford ponders the negative effect of man on mankind. It's a weighty concept, one that turns our own desires and quest for betterness on their proverbial ears. The instrumental "Reprise (Rocker)" utilizes the throbbing modern rock pulse of bands like The Flaming Lips and Radiohead, complete with dreary electronic drones.

You can feel the album's shift towards resolution in the wonderous swirls of "Sufferers". It almost makes sense to compare the music and lyrics on this album to the modes of Steely Dan; pleasing music often veils decidedly dark subject matter. Never too indulgent, the majority of the songs here are contained and not watered down by zealous improvisation or wankery, giving them singular identities.

Rubbery bass and a minimalist keyboard stab give life to the faux-rap vocals of "Root Of Loot", which is punctuated by a crispy guitar part and insistent cymbals. More and more colors are added to this tune until the end borders on outer-space dub. "Dead Soul Freak" is a bona-fide radio rock masterpiece, oozing with distortion and angst that eventually drops into a echo-laden dub section. Winding the album down further is the short, nearly-a-capella ditty "Nothing Left To Pawn", which comes off as a sort of demented nursery rhyme. The climactic flourish of "No One Sees" skips right out of the previous track, and as the longest track on the disc it sees a lot of different territory. A mellow, dancey rhythm serves as the platter for one last helping of amazing lyrics and carefully crafted vocals.

Words fail when trying to convey the manner in which this album cements itself in your mind. It's edgy and structural enough to appeal to the modern rock world, but full of enough vigor and texture to enamor fans of "jam" music as well. While a combination of indie-style rock, political themes, Flaming-Lips-like storytelling, ambient soundscapes, chill-out beats, and dub might sound like a lot to swallow, Seepeoples finds the right proportions of each ingredient and seasons them with the intangible seasoning of plain old "damn good" music.