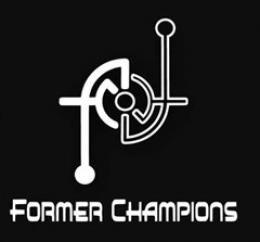 $9.99
Read the review of this CD on Home Grown Music.net

Former Champions' self-titled debut studio album spans a multitude of genres including Rock, Funk, World-Beat, Live Electronics, and NuJazz. Amongst these tracks you will find a story of an American man's experience in the modern world, and his past and present dealings with life's fascinations. Tales of his adventures and of his realizations of the mystery of love are expressed through a variety of combinations of groove, harmony, melody, and poetry.

Stereo System's electro hip-hrock feel opens this adventure and tells of a futuristic boombox controlled by the mind. "This Is The System So I Tune In The Frequency. Turn All The Knobs Up On The Interface."The flow is kicked into high gear as Virtual Playground's propelled groove takes flight. The verbal content explains of a virtual reality journey which is taken "On The Path Which Leads, Where I Don't Expect To Go". The pace is slowed for Symbols of which lyrics depict the protaganists respect for truth that is bestowed from his lovers gaze. "Your Eyes Don't Lie. Please Explain The Reason Why. Your Eyes They Show The Way. To All Those Feeling That You Just Can't Say."Worldwide Traveler is a euro-dance inspired track that reminisces of past journeys. "We Are So Inclined To Find Ourselves. As We Travel The World And See It All."An odd-time world groove introduces Infinite and sets the plane for the lyrical expression that elude to how one shall learn to embrace the hardships of the journey as a necessary aspect of the life experience.17th Street, the first and only of FC's more complex tunes to grace the album is composed of more advanced melodic, groove and transitional ideas. Its un-standard form creates a nice effect amongst the mix of songs and the esoteric language conveys of more ambiguous happenings. We is an eletro rock piece that emotes of the battle between love and excess. "And I Wanted You Too. Cocaine Eyes. And I Wanted That Too."The eighth track entitled, (Worthless) Human Artifacts, channels an African influence and contains poetic verse that returns to the theme of love. The words express how all material things become meaningless when in the presence of true inspired love. "Worthlessness Of Human Artifacts. When I Am With You In Your Terrain."GTFD may serve as the overall anthem of the disc with a funky dance groove and to the point hook. Containing one of the few improvisational guitar led passages on the album, Transport conveys a message about being schooled in the fast pace ways of city life and subsequently leaving the city to declare, "This Year, I'll Live, I'll Live Like I Want To. With My People, And The Way, And The Way I Choose."Poltergeist's middle eastern dance vibe is fused with the verbal yearnings for a psychedelic poltergeist to take a hike. "Control Me If You Will. Then Be Gone Never To Return"The second to last tune, Veer From What's Known, utilizes a rock/blue-grass fusion and tells of relationship happenings from life in the countryside. "On Midnight She Declares: The Truth Dividing Things But We Can't Be Apart."40s concludes the album and tells of an intoxicated car-trip to the ocean.