Music on the Mountaintop 2011

Unlike last year there was plenty of space to camp and it looked as if the campground was setup perfectly for a festival.  Campers surrounded two nice size fields. The first field was the location of the 3rd stage which had food and craft venders as well as a fantastic global structure built within it.  The second field housed the main stage and 2nd stage.  The 2 stages were small and basically the same size setup next to one another which kind of resembled the All Good Music Festival setup on a much smaller scale.

The music started around 1:30 and I was able to catch The Mantras later in the day which was short lived due to the outer bans of Erine reaching the mountains.  The wind gusts must have reached at least 40mph, the rain and lighting filled the sky giving us a whirlwind of excitement seeing tents and easy ups flying all over the place throughout the weekend. 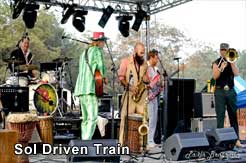 After the rain died down and I was all set up, it was time for Sol Driven Train from Charleston, SC.  With horns a blazing Sol Driven hit it hard from start to finish. Basses Rusty Cole glimmered like a shining star on stage running through bass lines and rifts like it was second nature. The intertwining sax and trombone melodies throughout each song matched perfectly with the rhythm of bright green and yellow suited Joel Timmons on guitar.  The perpetual sounds of Sol Driven are a mix between quirky children's songs to deep emotional and meaningful musical stories with well thought out lyrics; the band definitely has a knack for entertaining a crowd with their fruitful antics. 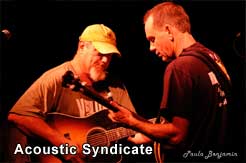 Acoustic Syndicate came on shortly after with a fun filled bluegrass set.  Billy Cardine on the Dobro was off the chain for this set; I think his abilities rival that of Dobro great Jerry Douglas. They opened with Water of Love as the crowd danced in the cool down pour. Sadly, after about five songs nearby lightning forced the end of yet another set.  Railroad Earth ended the night at 11pm with their unique style of bluegrass. When the music abruptly stopped Railroad Earth was not having it.  They wowed us with some impromptu acoustic encore blissfully serenading the unruly crowd who seemed a bit distraught from the sudden ending of the night.  Apparently we were inside the city limits which prompted an 11pm noise curfew.

As the rain steadily came down throughout the night, me along with mostly everyone else that didn't want to call it a night were scratching our heads with what to do and where to go. The sparse fires were struggling to stay a flame, the drum circles were few and far between.  I wondered aimlessly for a while searching for anything going on to no avail so it was time to call it an early night.

Today most of the day was spent around the Main Stage area where I checked out lots of good music; Yo Mama's Big Fat Booty Band was a down right party to say the least, Great Funktier who was really good but didn't seem to hold up to their name (where was the funk), Greensky Bluegrass, Infamous Stringdusters, Sam Bush, and 7 Walkers were a majority of the bands playing on both stages. 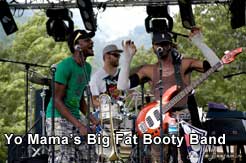 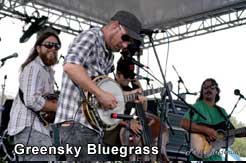 Hurricane Irene was hitting the coast today and although we were in the mountains 6+ hours away we could definitely feel the effects from the storm all day.  The bands really toughed it out and played through the high winds. At one point during the Sam Bush show they had people holding amps in place to keep them from blowing over. The festival is lucky they didn't have an incident like the one in August at the Indiana State Fair where the stage collapsed during a storm that had wind gust up to 60mph. 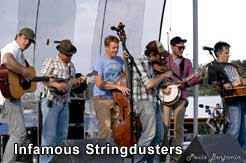 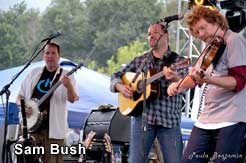 7 Walkers with Papa Mali and Bill Kreutzmann was the highlight of the day finishing the night out right. They have got the improv of Dead tunes down to a tee. Besides performing various original Robert Hunter songs, they did a few Papa Mali covers and the Grateful Dead's Cosmic Charlie, I Know You Rider, and Wharf Rat which were all off the chain. As an added bonus to the lineup, they had Kirk Joseph of The Dirty Dozen Brass Band on Tuba filling in the bass parts. 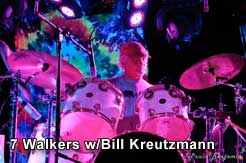 Of course the music once again came to a screeching halt at 11 pm and Papa Mali stated that he'd love to stay and play for several more hours, but the sheriff was having none of that. After the show I meet a kid that was playing one drum and the cops came to him and made him stop drumming now that's just down right lame. Needless to say it was another early night for me. 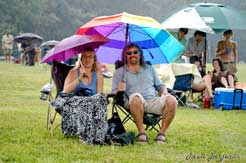 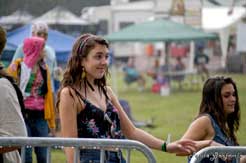 The weekend had its ups and downs with the weather and the noise ordinances on both days and I also didn't see the need for a third stage but all in all it was a good time. The educational Eco-Village set up around the third stage was kinda cool and there were some good bands playing over there but it was remote and crowds never really gathered in that area. I believe one field for this festival would have been plenty of space to set up a village or anything else for that matter and the extra bands could have started earlier in the day. The sets were a little too short and 11pm is outrageously early to end an outdoor live music festival. I think next year if they have MOTM in the same place that they need to restructure the schedule to cope with the 11pm ordinance by starting a little earlier.