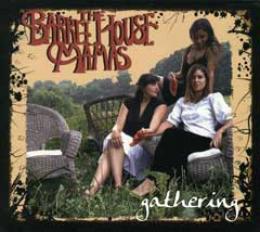 $13.00
The Barrel House Mamas, a trio of women from Asheville, NC, conjure the sweet and sultry sounds of the Appalachain mountains they call home in their robust three-part harmonies and original songs. Imagine the old-timey pluck of a jumbo-bodied guitar sliding between the bluesy roll of a classical guitar and the twang of claw-hammer (and sometimes contemporary funk) banjo. Now lace it with middle-eastern inspired flute lines, the wailing honk of harmonica, and the soulful belting of heartfelt poetry. The result is a sound that is all at once bluesy, rootsy, folk, americana, a touch of country, and truly these Mamas' own.

The foundation of this musical group is Jane Kramer Edens, Molly Rose Reed, and Eleanor Underhill, three singer-songwriters whose musical journey began while attending Warren Wilson College in the Swannanoa River Valley. In March of 2003, they each were to perform individual sets of their original music in a women's music showcase. One week prior, in what was supposed to be a playful, one-time collaboration as a finale for the show, their voices and instruments meshed for the first time, echoing up a cold dormitory stairwell, and stopping passers by. Now, more than three years later, with Sean Lallouz joining in on stand-up bass and David Mack on drums, they have achieved a gracefully powerful sound in thier extensive repetoire of original songs and creative arrangement of old favorites. With the release of their self-published debut album, Gathering, The Barrel House Mamas have cultivated a rich musical garden, the harvest of which only seems to be growing sweeter.