The Mantras bring in 2011 with a dose of rowdy covers, spirited originals, and a new member. 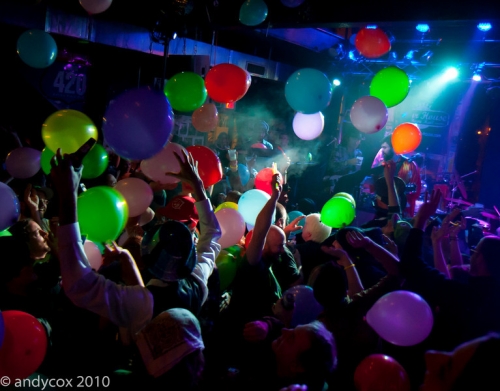 Plans had been late in the making, and after receiving some holiday incentive money, we decided to spend New Years Eve in Raleigh.  We arrived at the Pour House, ready for some New Years fun with the Mantras and pay our $10 cover charge gladly.  I give props to the door man for not charging extortionist rates for the NYE festivities, and he pats me on the back warmly as I head inside.  The Native Sway was onstage when we arrived, and they delivered an enthusiastic set to warm response.  People were finding their groove early on, and enthusiastic beer drinkers lined the bar.  We took refuge upstairs, knowing we wanted a spot along the balcony, and nestled in nicely there once we acquired some bar stools.  Now that home base was established, the ladies began their wandering and dancing, and Rob and I chilled along the balcony.

The Mantras opened with a warm mini-set featuring Mantras standards like "Further" and "Cross the Divide," before closing with a raucous cover of the Beastie Boys' "Sabotage."  Guitarist Keith Allen, resplendent in red smoking jacket, sunglasses and conical rice paddy hat, wanders upstairs to deliver the last verse, and rains a hailstorm of glowsticks on the crowd below.  The band takes a short break, returns for a NYE countdown, and a shower of balloons falls on the crowd, unleashed from above.  An excellent rendition of "Auld Lang Syne" finds friends and lovers hugging and celebrating, setting a nice foundation for the Beatles, "A Little Help From My Friends."  As with all covers on this night, this was a "first time played," and the crowd sang warmly in response.  Bassist Brian Tyndall signals the return-to-raging with a thumping introduction to "Magillicuddy," and this rendition morphs into a spirited "Beat It" cover before returning back to form.  An epic cover of Traffic's "Low Spark of High Heeled Boys" meshes with the fun and hilarity of "Dr. Feelgood."  This show served as the official unveiling of new keyboard player, Justin Powell, and he offered nice contributions throughout the evening.

After an extended, lengthy set, they deliver a two song encore featuring "The Way Life Goes" and "Heart Song."  The crowd, realizing that the show is nearing its end, delivers warm, rowdy applause.  Throughout the body of the show, a rather odd contraption had graced the stage, off to stage left where Tyndall had been smacking on his bass.  Tyndall picks it up, fiddles with the controls, and the machine begins to honk and squawk.  It establishes nasty beats and prompts the dropping of some nice rhymes from Keith Allen.  The wide-eyed crowd roars in approval, Allen thanks us for spending the night with them, and encourages our return for Night 2 of the weekend run.  I stand there by the balcony, yell like a fool, and make my way outside to smoke a cigarette.  I chat briefly with percussionist Brent Vaughn outside, and he humbly accepts my compliments, deflecting honors back to the enthusiastic fans that follow them throughout North Carolina.  After taking a moment or ten to reclaim my belongings, my girlfriend, and my ride, we barrel out to Blount Street and the Raleigh night.  We make our way through friends and freaks alike, find our car on an adjoining street and make the trek home.  Jennie and I giggle throughout the ride, reflecting on all the cool people we saw, and all the interesting interactions of the night.  It was a definitely a great way to close 2010, and start the New Year.

In thinking about the night as a whole, I have to applaud the Mantras for delivering a $25.00 show for the price of a $10.00 ticket.  The Mantras took the stage with intensity, and never let up.  The Mantras played for hours, and would undoubtedly play all night, if given the opportunity.  I know... I have seen it.