I don't get to see these guys often. It's usually at festivals when I do get to see them, the most memorable being 2005 Floydfest. The fog had set in and you couldn't even see the stage in front of you. I can remember watching the silhouettes of hula hoopers and people dancing in the darkness.  The show was fantastic. I've seen them several times since then, all good shows but not nearly as good as they were in Floyd, Virginia that night. It was actually my pick for best live show of the year. I'm sure any hard core fan can tell me that there have been many outstanding shows since then and with a talented band such as this I'm sure that they're absolutely right. 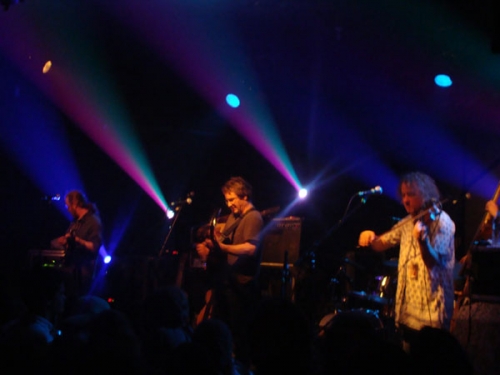 actually going to be in town to catch them this time. The last time I saw them was at last years Allgood festival. Even for a Friday night the place was slammed packed. I was actually pretty surprised. The beer lines were ridiculous and for an all ages show it was good to know that the majority of the crowd was much older. You sort of get tired of seeing the really young kids at the Cradle who normally seem to be more interested in who's there than who's actually performing. You could clearly tell that everyone there was really excited for the music. The overall vibe in the place was pretty amazing. There were smiles all around and everyone seemed to be in their best moods.

Old School Freight Train started things off and by the time they finished their set you could feel the energy of the crowd. Everyone was really hyped about the upcoming show. You could just tell that the rest of the evening was going to be special.

With an overwhelming cheer from the crowd RRE entered the stage and opened the set with a nice, mellow Bill Monroe classic, 'Old Dangerfield'. Followed by 'Cold Water' from their first album, Black Bear Sessions, a cover of the Everly Brother's 'Bowling Green' and 'You Never Know' from their latest release, Amen Corner, you could tell that the band was slowly starting to build up some steam. Things started to pick up when they performed 'A Day on the Sand' and I thought John Skehan really shined on 'Mourning Flies', from the album The Good Life. Nate Leath from OSFT sat in on Violin for the Waterboys cover, 'Fisherman's Blues' to close out the set. The first set was short but sweet and it was around this time that I realized how packed the Cradle actually was. You could easily overhear fans saying that the best was yet to come. With balloons bobbing overhead and the cheerful vibe of brotherly love in the air you just knew that the band was indeed feeding off of the crowd this night.

The second set opened with another song from their latest release, 'Been down This Road'.  'Just So You Know' came next and it was probably the best version I have ever heard. Very nice! Nate returned again for the song, 'Little Bit O' Me' followed by an outstanding new instrumental jam that has yet to be titled by Skehan.  The show was really cookin' now. The 'Warhead Boogie' into 'Dover to Dunkirk' really showcased how tight and solid these guys are. They wrapped up the set with 'Storms' and 'Cuckoo's Medley' but it was very obvious that the crowd wanted more as they cheered for an encore.

Usually fans tend to trickle out near the end of a Cradle show but not tonight. The band returned to the stage with smiles and even some good humor by Todd Sheaffer. You could tell that they really enjoyed performing in Chapel Hill that night. The band closed out the show with 'Railroad Earth' followed by a high energy fan favorite, 'Hard Livin'. When it was all finally over you could already hear people talking as they trickled their way outside that this was indeed a stellar show. With only a handful of RRE shows under my belt this was good to hear because it was definitely my all time favorite performance by these guys. If you haven't had a chance to catch this band in a venue yet I highly recommend you see them outside of a festival setting. I promise you won't regret it! 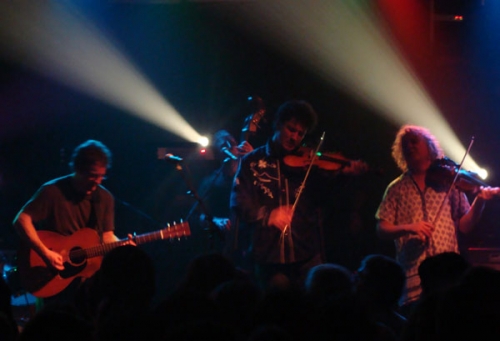