Ila Mawana performs at the Mojito in San Francisco.
By Buffy Bender
Photos by Zach Smith 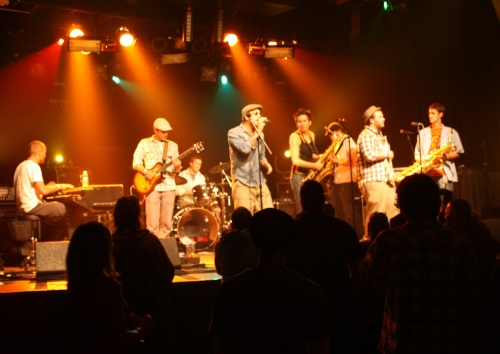 From the outside, Mojito looks like your average, run of the mill, old school bar.  Upon entering, I found myself at one end of a large open room.  Along the wall to my left was a bar, which hosted a sizable selection of booze.   To my right the area had been cleared of tables, except for a few near the windows behind me.  It was big enough to not be crowding, but still had an intimate, inviting feel.  Dim, accenting red lights added a calm energy to the air.   The wall to my right had been painted the color of cherries and was adorned with three large, original paintings.  The wood floor showed signs of many nights of hard dancing and in the right, far corner was a small stage raised about 3/4 of a foot high, which left minimal separation between the band and the audience. 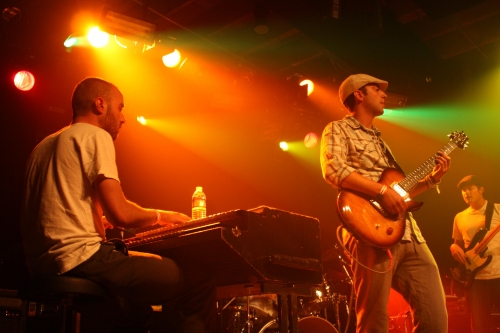 Ila Mawana had me wanting to dance from the very first note.  The Boston based, eight piece band blasted a classic roots reggae sound that wound tightly together, a warm, thick sound that grooved better than anything I'd heard in a long while. They made you feel so absorbed in their vibe that I found myself wanting to sing along to songs I'd never heard before - something of a challenge when you don't know the words.  The crowd was definitely into it just as much as I was, showing their appreciation through shared smiles and shouts. The band opened with "Soldiers of Sound", also the title of their newly released album. They included three new songs from their album in this set, "Grow My Way", "The Golden Age", and "Jigyo Keta". 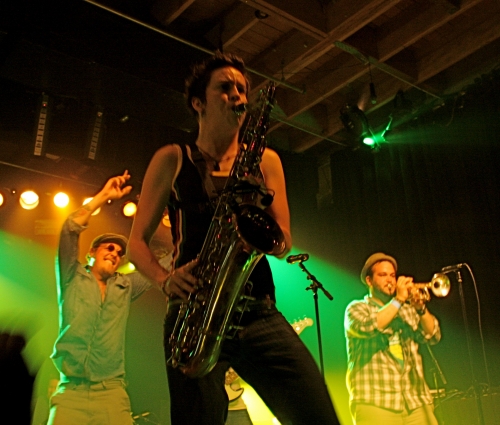 Ila Mawana kept the positive energy flowing all night.  Their experimental dub/jam band sound allowed you to turn the experience into whatever you personally wanted it to be - funky and upbeat or groovy and laid back. You could dance till you broke a sweat, or stand in the back and bob your head - both ends of the spectrum were totally acceptable for the music. ILa Mawana even shared a story about how they had been traveling around in a big yellow bus on their current tour, which led to a cover of the Beatles "Yellow Submarine". Set break came after this song, leaving us able to take a breather and get ready for more.

Ila Mawana came back strong for the second set with "Journeyman". At one point during the set, the three horn players came offstage - still playing - and walked through the crowd, dancing along with members of the audience. They pulled out a gem in "Pure Imagination" from Charlie and the Chocolate Factory - the crowd and I loved it. They ended the show with "Mortal Motion", also a song off their new album. 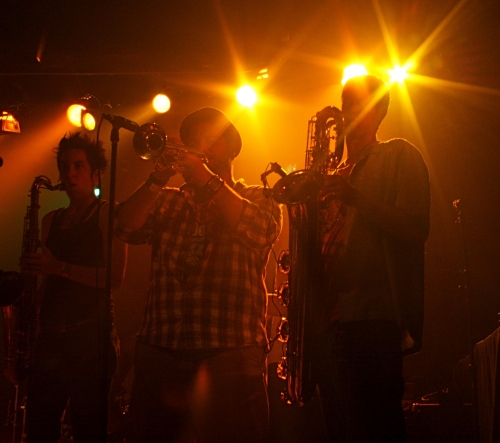 All in all the show was a complete success - mentally, physically, and spiritually. ILa Mawana exuded such a profound, positive energy that wrapped you up and kept you enchanted for the whole show. And what makes the music so much more inspired is that the members are so animated, bringing each song to life, guaranteeing a sense of airiness and a very positive concert experience. Indeed, this was a show that made my San Francisco existence full of purpose. Ila Mawana is a wonderful discovery for those of you looking for music that's positive, energetic and full of dance-worthy beats. It's hard not to swoon- and even pump your fists in the air as your body shakes to the groove. This band is not to be missed.