The first annual Booty Band Land which took place at the Sneedville Yacht Club Ranch, near Sneedville TN on Sept 24th to Sept 27th was to say the least an adventure.
Words & Photo's by Brad Winecoff


I was not fortunate enough to make it on Thursday but I learned that bands such as The MaIah and Tennessee Jed were canceled due to rain. Luckily, people who arrived early got to experience Donna the Buffalo jam out till 6am, wow! 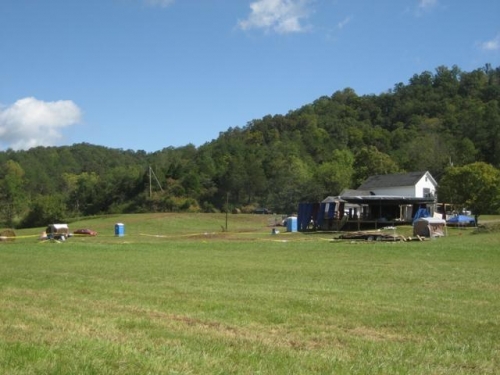 Making our way to our camp down by the river, we circled around the venue and I was able to get a glimpse of the Yacht Club Ranch. A beautiful rustic white Tennessee country home was on the forefront of the drive in; it overlooked acres of flat fields with bales of hay everywhere you looked.  Within the venue were 4 event tents, 2 stages, and a nicely flowing Clinch River.  We found a great spot on a newly mowed strip of grass that was only about 10 feet from the river.  After taking a refreshing dip it was time to catch some music on the main stage. The stage was located on the back deck of the house and was named the Booty Band Stage. First on our list was Jonathan Scales Fourchestra.  Scales, hailing from Asheville, NC, ripped it up on the steel drums with his innovative way of blending his sound with the other great musicians on stage. (Ryan Lassiter - Drums, Shannon Hoover - Bass, and Duane Simpson - Guitar)  Their music gives you a warm jazzy island feel that can sweep you off your feet if you're not too careful.  After they concluded, we set off to see what else Booty Band Land had to offer.  Walking down to the other stage we passed 2 large event tents one with a massage therapist ready to give anyone a rub down and the other housed a nice little stage, this was called the Badonkavilion Stage. On to the second stage considered the Don Juan Stage was Tennessee Jed another band from Asheville NC, who was very fun and energetic. They have a fantastic repertoire of folksy, rocking, bluegrass style tunes that can surely get you shaking your hips.  Having to ask to see who the band was and who is next hinted to the fact that there were absolutely no program guides or schedules to be found anywhere. It looked like we are on our own to find out the what, where and when for the weekend ahead.  After investigating a bit we found one schedule taped behind the Booty Band Stage where I was able to write all the times down for the weekend. Jeff Sipe and 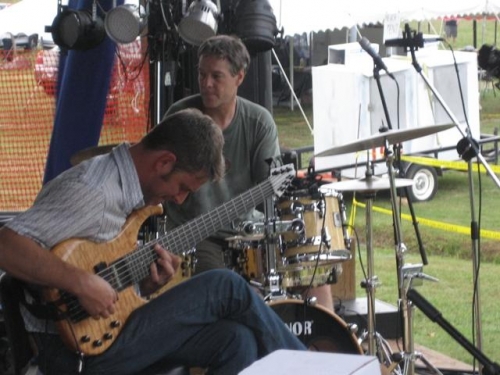 Friends was coming up next! Jeff Sipe, Melvin Sears, and Neil Fountain delivered a culminating eclectic set;seemed to elevate their playing by the impressive high energy drumming of Sipe.  As the evening approached, Gent Treadly from New York City hit the stage with a very special guest, Steve Molitz of Particle.  The mostly all dead set was fantastic; Steve, who had played with Phil and Friends, gave his electrifying twist along with Gent and his band. They found a way to give such meaningful dead songs a fresh new sound.  Following the dead set was Donna the Buffalo on the Don Juan Stage.  DTB shined on the stage with their assortment of zydeco, folk-rock style music. The sound seemed to be a little off, it sounded like Jeb Puryear (Vocals and Guitar) was singing from a bullhorn for a bit which actually gave it a nice rag time feel. Playing through the sound difficulties, DTB gave an outstanding performance continuing well past their time slot despite the sparse crowd that was there. Next on the agenda was Yo Mamas Big Fat Booty Band who definitely brought the funk to the festival, putting on a show that mama would be proud of.  The costumes were sparkling, the band was tight and the energy was on fire. For the 30 to 50 people that were there it was a hip shaking, pelvic thrusting good time. It was so good that one individual ripped off all her clothes and rolled around in the 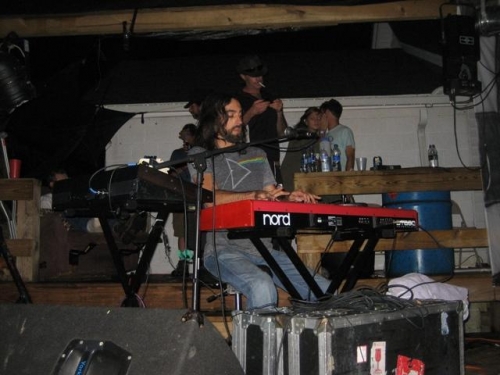 grass grooving to the music. She in turn disrupted the awesome visuals that were casted on the lawn in front of the stage from a golf cart that had a projector and laptop mounted to it.  The late night set featured Sci Fi, from Wilmington NC; has the ability to throw together a jazzy trance fusion groove that is on the top of its game.  We danced until the wee hours of the early morning.  The only disappointing aspect of the show was the lack of people and energy that should have been there. I assume everyone that was planning on coming to the festival was scared off by the weather report.  With an 80% chance of rain on Saturday I can understand the hesitation people had.

The morning of the 26th started off with a light drizzle; waking up to the nice sound of the 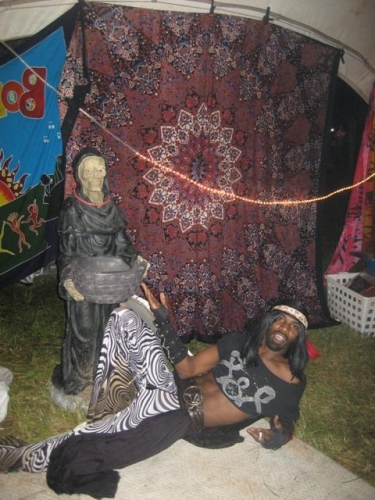 river and rain was quite refreshing. I was hoping we would be in the 20% part of the weather report but that was not the case. As the morning progressed we were confronted by security who told us that we should move because the river might rise due to a Flash Flood Warning Advisory.  Looking where the river was and talking to our neighbors we decided to stay put, there was no way the river would raise above 10 feet. Waiting patiently for some music we hung out and had a great breakfast under the hospitality tent.  Looking around I did notice one thing, there was only one food vendor, The Fired-Up Pizza Kitchen. I hope everyone that paid brought their own food or else they are getting pizza for breakfast, lunch, and dinner.  The morning soon became afternoon with still no music to be heard because of the rain that had since turned into a downpour.  Eventually we were confronted again by other security people that told us we really needed to move our camp.  So we went down and picked up our tent and screen house and moved it to the field underneath one of the event tents that was not being used.  The river still didn't look like it had risen at all but I'm sure they were thinking it was not going to stop raining and it's better to be safe than sorry, I concur. After we were safe from the so called rising river we learned that the rest of the bands for the weekend, both Saturday and Sunday were being canceled. The storm was so furious it damaged the Don Juan stage that put it out of commission for the rest of the weekend. The roof of the stage collapsed due to the amount of rain that collected on the top.  That was so disappointing because there were so many bands that I really wanted to see like The Mantras, Hot Politics, Eymarel, and many others. The few that were not scared off from the storm came together and created a nice family feel. Everyone seemed to work together and help to make the best of the bleak situation.  As the night approached the rain finally let up and the bands that stayed let the party continue with a performance on the Badonkavilion Stage.  On the stage were members of the Dot Line Projekt, The Blue Haired Ladies and other bands. Asher McKinney on keys really stood out with his hot hands and his fantastic vocals which reminisced that of Jim Morrison of The Doors.  The culmination of musicians jammed on from 7 pm till 3am. The Effigy Burn that was scheduled for Saturday night was canceled due to the waterlogged wood used to build the Bootylicious Effigy. Luckily with a team effort from the staff, a gasoline drench bale of hay was used in her place. The huge bale raged till the late morning hours pleasing the few remaining.

Waking up on this beautiful sunny day, we decided since there was nothing going on that we would pack up and hit the road.  Before leaving we decided to walk down to the river to see how high it had gotten, and wow! Were we surprised! Where we had set up camp was at least a foot under water, we would have most definitely floated down the river on our air mattress if we didn't move. We couldn't believe our eyes; the once calm river was now a full blown rager. The rain soaked muddy field had really put a damper on people trying to leave; a tractor had to pull every car out of the field which took most of the day.  I would like to thank the security for saving us from floating away, the tractor pullers for getting my car out safe without ripping off the bumper, Ryan and Carly who worked all weekend on keeping the staff and bands fed and Gypsy Dave with his beer soaked mustard and black pepper based pork tenderloin. Yummy! 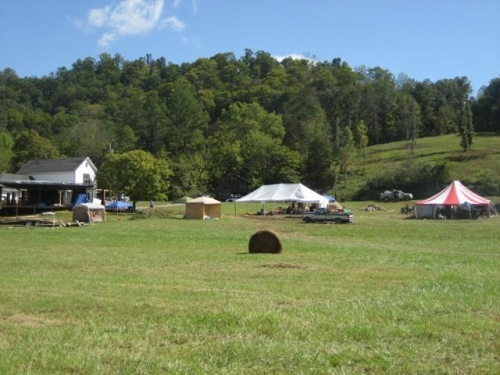 Booty Band Land was an experience like no other. From great music to flash floods, the festival was an adventure to say the least. I hope that next year the weather will cooperate and the buzz gets out because this has the potential of being one of the best parties of the year from one of the best party bands around.