Big Daddy Love kicks out a nice mix of bluegrass, rock and exuberant swagger for a free Friday night show in Greensboro. 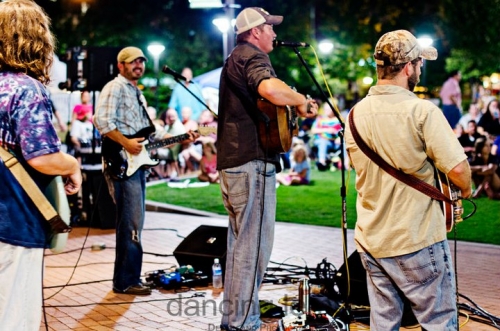 As one of the main writers for the Home Grown Music Network, I have been sent a great collection of CDs over the last three years, and this has bolstered my CD collection and my Ipod "rotation" considerably.  Sometime last year, I was given the chance to review Big Daddy Love's "To the Mountain," which offered an excellent introduction to the band.  The album embodied a compelling mix of genres, as bluegrass elements were blended nicely with other genres (rock, jam, and even country) on many tracks of the album.  However, the album is deceptive, and when one sees Big Daddy Love in concert, one sees a band with considerably more "teeth" than "To the Mountain" indicates.  The album is well-versed and accessible, but Big Daddy Love, in concert, proves itself to be a "rock" band with bluegrass influences.  One hears strains of banjo throughout the album, but Brian Swenk's banjo proves to be feverish, exciting, and even rowdy when presented in a "live" medium.  I've seen Big Daddy Love several times over the last year, but their performance on August 5th at Center City Park in Greensboro proved to be revelatory. 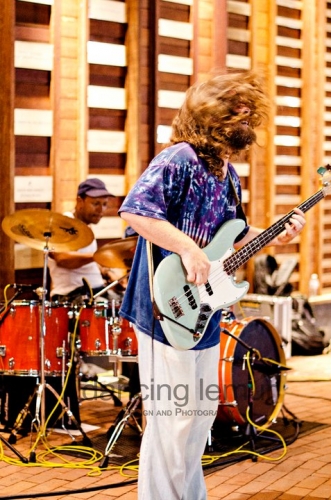 My cohorts and I arrived just before 8:30, celebrating Red's birthday, and anticipating a fun night and weekend ahead.   A reggae band (whose name has escaped me) offered a Marley cover to close their set.   The crowd seemed pretty light at first, composed mostly of the opening band's fans, but a steady stream of BDL fans began to fill the amphitheater soon thereafter.  BDL offered a track for "sound check" and my dear pal, Megan, busted out her hula hoop to show her appreciation.  At this point, vocalist/guitarist Daniel Justin Smith proclaims "we've got a hooper" and the crowd responds warmly.  The band offers a nice combination of songs on their set list, with several standards from "To the Mountain" as well as several songs that will presumably be on their next CD.  The crowd, now composed of lots of members of the "Love Bus" (the self-proclaimed nickname of their most loyal fans), responds warmly throughout each track.  Brian Swenk offers skittering, energetic runs on his banjo, and I look to my friend, Joe Martin. 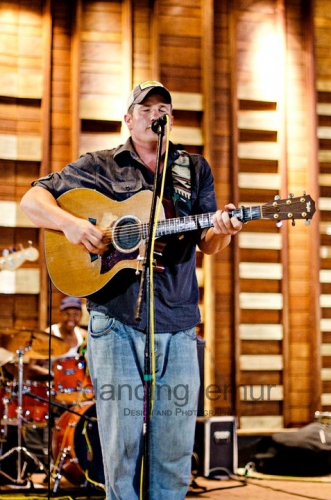 I had brought Joe to one of these shows earlier in the summer, when Home Grown Music artist Dangermuffin played an earlier set.  He had been exposed to their music before, and considered himself a fan.  When Dangermuffin played, he found himself singing along and having a grand time.  But on this Friday night in August he looked at me with a wild, devilish grin and offers, "these guys are even better" and I knew exactly what he was talking about.  Since I consider myself a fan of both, I realized that this was a high compliment, and pretty much on point.  I have really enjoyed my copy of "To the Mountain" as well as the several BDL shows I've had the pleasure to witness, but Big Daddy Love separates themselves from the fray with their live performances.  For all the merits of "To the Mountain," and there are many, Big Daddy Love is an amazing "live" band.  One who listens to "To the Mountain" might be inclined to think a live performance would be introspective, composed, even reflective.  But within 2 songs at a Big Daddy Love, your girlfriend is going to be spinning and dancing the fool.  And you might even be too.  Big Daddy Love played 14 songs this night, and closed around 10pm.  Feel free to check out a recording of the evening's performance at http://www.archive.org/details/bdl2011-08-05.CA-14.flac16 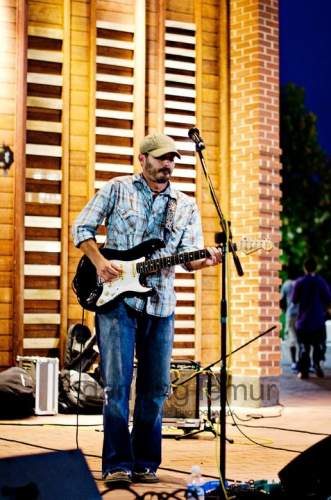 Just be prepared to dance, even if only in your seat.