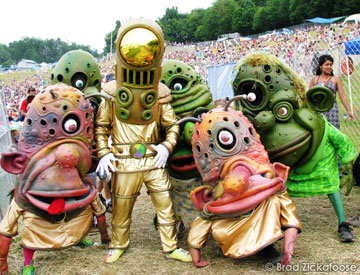 ars after it's humble inception, the All Good Music Festival and Campout has blossomed into a full scale, national level shindig delivering three full days (four if you count the early arrival pre-party on Thursday night) of non-stop eclectic music, scenic mountainous surroundings and great times with an estimated attendance of 35,000. Over the years, the festival -- like any worthy endeavor -- has endured various growing pains; several site swaps to accommodate growth, a date change from May to July in 2003 and often severe, unseasonable weather (pick a year). The Walther Productions team, with talent buyer extraordinaire Tim Walther manning the helm, has steered clear of the mediocre -- even in turbulence -- by applying an uncompromising approach to the overall music experience, making All Good stand out from the pack as the summer's top pick for serious jam heads in need of a supersonic fix.

Thursday night's early arrival festivities descended upon Marvin's Mountaintop with the setting sun as my entourage pitched tents just before dark. The parking situation turned from a semi-organized effort into a wide out free for all on a dime as choice camping spots were quickly staked out by perhaps the largest early attendance to date. My squad was unfortunate to get situated several rows behind a rowdy "nitrous mob" out of Philly who began to rage frosty, cold balloons to the drooling masses literally minutes after nightfall. 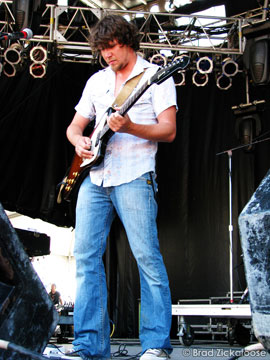 The music lineup on Thursday night was stellar on the Ropeadope Stage (camp side) with sound difficulties being the major hang up during Perpetual Groove. Although the lively front stage folk seemed enthusiastic, the sound on the hill just to the southwest of the stage sounded terribly muddled and lackluster to the latecomers that poured in to party hearty. P-groove set off with a decisively spacey vibe opening with new face John Hruby tickling the ivories on the first twinkling notes of It Starts Where it Ends. The Brazilian Girls brought the steamy stew to a boil, tossing chunky beats and tasty electronic melodies into the pot, spicing it with a distinctive 80's flavor. Bony cronies boogied en masse on Losing Myself as sultry femme vocalist Sabina Sciubba, dressed in a white mini skirt and pleated cuffs, pulled random festies from the lurching crowd over the barricade and into the photo pit for a piece of the action. The musical peak Thursday night wrapped up with the Join (featuring Darren Shearer and Jamie Shields of the New Deal and the Benevento-Russo Duo) taking the stage nearly 30 minutes late after an extended sound check. The dual drum/keyboard outfit seemed to ebb and flow rhythmically with the billowing thick fog that descended and receded on the late night mountaintop. Those in attendance not knowing what to expect from the foursome seemed split on their post show murmurings but those in the know were thrilled to experience the live voracity of the musical merger as the night was capped with a blinding array of fireworks and heavy boozing. 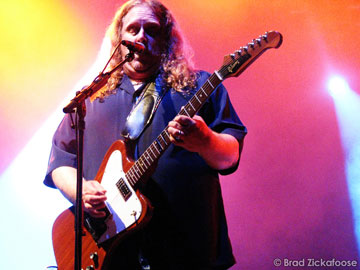 Smiling, happy campers piled in by the droves for the first full day of fun as the steady line of traffic seeped onto the festival grounds unyielding throughout the night. My tent was searing hot as the sun peaked over the ridge beaming its light over a beautiful Friday morning. As other bodies in my entourage began to stir, we soon discovered that things were not all good, as ours and other campsites in the vicinity had been looted sometime during the wee hours of the night. The loss of expensive camera gear and several hundred dollars, among other personal items, was a harsh realization that not all festival folk are caring, sharing souls full of hugs and laughter. The hard edges of reality in that situation carry a sting that is difficult to forget. With a hard lesson learned we all licked our wounds and headed to the venue to wash away our woes in the cleansing sounds of song.

Later as the sun rolled over the ridge, NYC based Lettuce tossed a leafy, funk salad for a solid hour of all you can eat, heaping grooves by the mouthful. I had heard through the grapevine that Lettuce was good for your ears, chocked with the daily recommended dosage of vitamin beat, diced wack-chicka-wacka guitar by Eric Krasno, nutritious, lean bass courtesy of Erick Coomes, enriched by the punchy saxophones of Sam Kininger and Ryan Zoidis and coated to taste with Neal Evans' keyboard dressing, Lettuce gives the crowd bodies all the energy they need for a well rounded boogie. 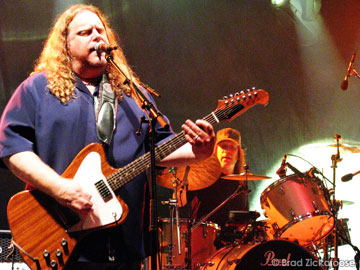 In previous years, the Ropeadope stage has been a legendary spot for hot up and coming acts and spontaneous, massive mash ups. This year was no exception to the rule with Medeski, churning out B-3 driven watery textures under Scofield's six string mastery, punched and kicked by Adam Deitch's (Lettuce) up tempo drum swagger mid-day, followed by funk flavored Philly hip-hop rhymes courtesy of Black Landlord after dark.

Taking the All Good stage for the first appearance since 2003, Gov't Mule held down late night music duties on Friday. Warren ran about 30 minutes late due to technical difficulties with his pedal rig and continued well into the music. Haynes navigated any problems like a veteran, ripping strobe lit melodies from the stratosphere on a swinging No Quarter and hitting heavy accolades on Radiohead's Creep just before tying up the encore with a hearty rendering of Soulshine. Warren is the epitome of a reluctant guitar god in the lime light, standing poised with chin tucked, sex-face in effect, shredding heads wide open with every stinging note. 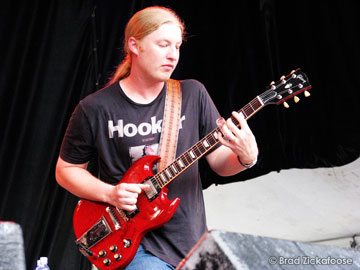 After a long night of raging ape camp-side, the morning dawned slightly overcast but nonetheless muggy. Dust levels kicked up to a high around noon, but paled in comparison to the blues bath being delivered by Eric Lindell at the All Good Stage. Eric brings a youthful approach to a genre dominated by hoary, guitar grizzlers. Lindell has a straight, street level sense to his music and his relentless tour schedule is certain to guarantee loads of fresh faces frequenting the blues section of local record outlets in the near future.

Brightly costumed festies ran amuck in the sweltering heat of the afternoon. Fairies, aliens and rancid looking vegetable characters danced stage side to Derek Trucks & Susan Tedsechi's Soul Stew. The husband/wife team has combined forces to deliver a powerful audible pounding with Truck's always on, searing slides and Susan's throaty intensity on the vox , pleasing ears on board for a spirited Derek and the Domino's classic Anyday. Soul Stew wrapped up the set later with a buttery, ardent slide intro on The Weight.  Susan's adrenalized vocals spurred onlookers to chime in smiling unison as the band crushed the outro, overheated with loads of Truck's guitar fury and a fleeting vocal finale from Tedeschi followed by gales of applause. 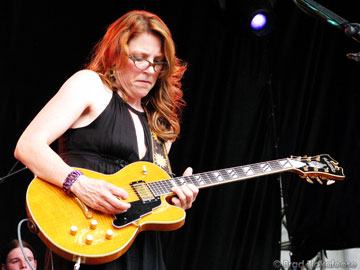 The overall line up on the main stage over the weekend left a tang in my mouth churning out many of the same names as every other shindig on the 2008 circuit; Lesh, Widespread, Keller and with all due respect, make for memorable music but I enjoy going to gatherings to sample the fresh meat, bands who I've seldom or never heard live, The Magic Hat Stage schedule had me drooling over the slot after slot of unwilted grooves that makes the protuberance in my pants pulsate. Young blood such as Scrapomatic, Rev. Peyton's Big Damn Band, SOJA and Bassnectar were just a taste of the precious of musical gemstones being unearthed on the alternate stages over the course of the weekend culminating with a ferocious set by the Bridge on Saturday night.  The Baltimore boys ripped into Get Out of My Life Woman and Brother Don't in support of a Rex Foundation promotion. After frontman/guitarist Cris Jacobs belted a screaming mean streak on Shake 'Em Down, Mike Gordon joined them on stage and generally seemed impressed at the sextet's prowess and skintight traversing of their polished repertoire.

Heavy rains and tropical storm like winds swept across the campground early on Sunday morning but the water didn't seem to cleanse away the skank that seemed to accumulate over the weekend soiree. Bonerama dusted off the crud of the mud just before JJ Grey and Mofro applied a little front porch swagger to the boogie bound sun burnt flesh that lugged ass out of tents for the final day of partying. Grey is a workingman's vocalist, donning classic cowboy shirts and boots; his homespun warmth behind a watery Hammond makes for mass appeal among common folk and those who appreciate a from-the-heart approach. 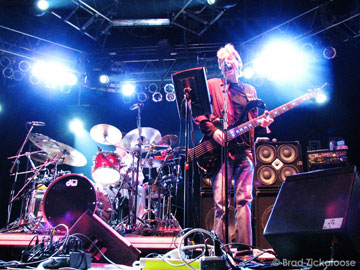 Early wet conditions and a slight chill to the breeze sent many campers packing for the hills, but the die-hards hung tough for the positive vibes of Michael Franti and Spearhead, who descended the stage with A Little Bit of Riddum around 5. Franti's live music can seem stale and unvaried at times but his over the top stage presence and altruistic message peeked through the gray canopy like rays on a hazy Sunday. The shiny persona emanating behind the microphone brought festies to their feet for the finale of the festival on the call and response of a bouncy, Say Hey (I Love You).

The overall experience of this year's All Good was hit and miss for me all weekend. Walther Productions made an earnest effort at purveying great times and music to all in attendance and should be applauded for attempting to do so for over a decade. Sometimes it's not about the line up or the beauty of the surroundings it's about the people. In recent times the festival market has become notoriously saturated with shady folk engaged in unscrupulous activities and not surprisingly police have responded. Although only 4 felony arrests were made over the weekend, reports were circulating over the grapevine about police dogs in surrounding counties shaking down speeders coming in and out of the festival.  Nevertheless, Preston Memorial Hospital reported that 27 people were admitted from the festival for multiple drug and alcohol use, plus dehydration which could be an indicator that next year's statistics could be considerably higher.

Grace Potter & the Nocturnals - This is Somewhere CD
$12.98
Add to cart