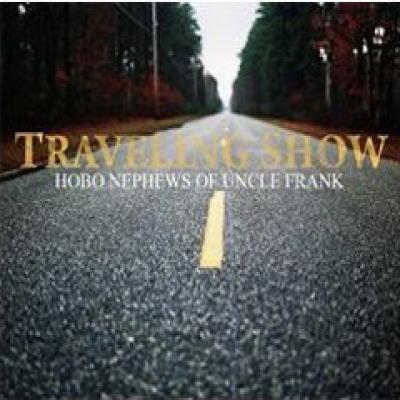 “Traveling Show” presents a charming collection of tracks that are fun and disarming in their honesty.

The Alexy brothers, Ian Thomas and Teague, first formed the Hobo Nephews of Uncle Frank as a duo in Minnesota in 2005.  Originally featuring just the two brothers and a rotating assortment of local musicians, they released their first album "Sing" in 2007.  The 2009 release of "Traveling Show" proves to be a discovery, as the brothers have added Paul Grill as drummer, and a bevy of talented guest musicians contribute their talents to the recording.  Marco Benevento offers wurlitzer and organ for three tracks, John Graboff adds pedal steel for two, while members of Trampled by Turtles offer mandolin, banjo and violin for various tracks in the album.  The production qualities of the album, coupled with the candor and honesty of these tracks, makes one feel like they are hearing the confessions of a carnival sideshow worker.  Enthusiasm seeps from the tracks in this recording, drawing the listener in for repeated listens.

The album begins with the swanky "Traveling Show;" punctuated by sparse keys, confident guitar and energetic vocals, the song has a rustic sing-along quality that blends elements of old and new.  Imagine "Johnny B. Goode" as played with a buzz saw, and you'll get some impression of the track's attitude.  The howling of harmonica announces the arrival of "It Happens All the Time" but enthusiastic guitar flourishes and fun vocals contribute nicely to the fray.  The charming "Little One" is remarkable and lovely, with understated guitar and airy lyrics.  "Break Every Bone," with its pedal steel and reflective lyrics, invokes the spirit of vintage country.  Harmonica and guitar summon the spirit of the barnyard in "The Rooster."  This charming ballad about a rooster in a henhouse, "twenty chickens deep" is punctuated with guitar and drums as it saunters home.

"Silver Spoons" rollicks and rolls, sounding like a jam in some modern ragtime saloon, while "In the Morning" is decidedly more subdued and quiet.  This juxtaposition of moods is prevalent throughout many tracks on the album, resulting in a varied palate of songs.  Jam luminary Marco Benevento contributes organ for "Memphis in Your Head," which features raucous guitar and a spirit of rowdiness.  "Brooklyn NYC" charms and disarms, resulting in a sing-along classic that will resonate with you long after its 2 minutes concludes.  "A Long Time to be Gone" tells the story of the wandering hobo, and is completed by pedal steel and its sense of the wandering "desperado."  The arresting use of pedal steel adds a spooky, layered quality.  When coupled with lyrics that are consumed with lonesomeness and the passing of time, the overall result is darkly effective.  "Old Friends and Rent Checks" is plucked lightly and reflectively, while "Daddy's Coming Home" closes the album with a transfusion of energy and jaunty guitar.

The tracks of "Traveling Show" proved to be a revelation to me, and I was dazzled with its spirit of fun, intelligence, and zaniness.  The tracks on this album have a decided intimacy, as if the listener is watching rapscallion musicians on some city street corner.  That sense of honesty, warmth and exuberance is quite charming and really invited me in as a listener.  The songwriting is top-notch, resulting in tracks that are varied in tone and production.  Some tracks feel haunted and remote, almost lonely, while others summon the rowdiness of saloons and carnival sideshow acts.  The CD package comes with a DVD of the film "Moments and Truths," directed by Joshua Priestley.  Featuring rare concert footage, emblematic imagery and experimental snapshots of the band as they travel through life, the DVD proves to be an interesting footnote for the album.  In review, the tunes on "Traveling Show" prove to be potent stuff, with the Hobo Nephews of Uncle Frank delivering the goods "in spades." 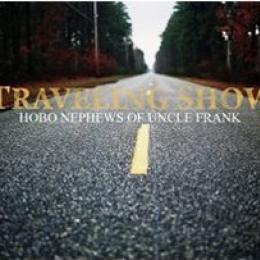