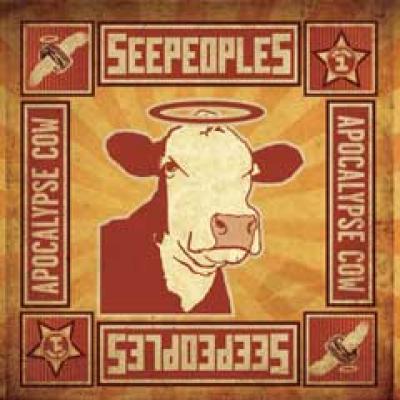 With most of the United States drunk on a cocktail of Prozac, American Idol, tabloid drama, and YouTube drivel, not to mention the soul-crushing trials and tribulations of their everyday lives, it's little surprise that constant death continues in Iraq. Those who wish to end the war, even those in powerful positions, are completely ignored or have their sensible proclamations filtered out of the collective American consciousness by a screen of static and slop. It's not fun to think about such weighty matters, and most citizens are content to drown them out with anti-depressants.
SeepeopleS' Apocalypse Cow Vol. 1 is here to ask the questions they don't want to consider. Some of the songs on this album might even make a few of the heartless bastards cry. After hearing this album, the senseless garbage that most people consider "music" goes from laughable to enraging. The ignorant way in which they live their life becomes maddening. You hope, at least, they'll somehow give a thought to someone besides themselves, somewhere along the line of their life. But it's also plausible that most people are just going to keep cruising along in their Hummers listening to The Pussycat Dolls. That fact is the heat that makes Apocalypse Cow boil with alternating coils of anger, regret, hope, and sadness. Lest you read that last sentence and write off Apocalypse Cow as a straight bummer, man, there's a whole world of music and words contained within that will show you otherwise. Sure, there's plenty of apocalyptic cud-chewing here, but you'll never have so much fun being angry. If part of bluegrass music's rough draft was to mix happy music with sad lyrics, Apocaplypse Cow is somewhat of a world-weary, war-torn, electronic rock counterpart to that sensibility. The standout example is the title track - a twinkling keyboard line and subtle drums ignite a full-throttle rock chorus that sounds like it has been lying dormant in the ether for over a decade, waiting for a band condusive enough to handle it. Songs like "Apocalypse Cow," "Holding," with its ballistic structure, and "Battle Cry," which boasts a highly explosive chorus, will cajole you into rocking out even as you consider the weighty subject matter of the lyrics. Same with the charging "My Friends," which is a thinking man's air-guitar song if I've ever heard one, and the jittery "Don't Panic." While those songs give a sense of what it is like to experience SeepeopleS' energetic live show, there's also a great wealth of simpler, emotive songs that, while not exclusive to the studio, benefit greatly from the medium's precision silence. "Don't Be So Long," a longtime live staple, is perfectly accented with strings on Apocaplyse Cow and gets my vote as the most repeat-worthy song of 2007 thus far. Also outstanding is the plantative "Already Laughing," which offers some of the most tear-jerking atmosphere on the album. "The Sun Is With You," alternately, will likely never see the light of stage, since layers and layers of psychedelic voices channel the far side of Brian Wilson on this track. "Stranded On The Sidewalk" and "Someday Robots" have a classic songwriting personality, and the latter sounds about a pedal steel slide away from a country song thanks to a shuffling, chugging rhythm and strummy guitar. The album-ending epic "Say Goodbye" is a masterstroke for the band, combining a fearful anticipation with sweeping rock orchestration, neatly ensconsing two of the key elements of SeepeopleS' sound. A lot of this style was conveyed on the band's highly-regarded album The Corn Syrup Conspiracy, but until now they lacked an album of their own collective creation (Corn Syrup was mostly a product of singer/guitarist Will Bradford). Bradford's ambitious songwriting ideas coupled with the talents of drummer Tim Haney, bassist Dan Ingenthron, and keyboardist Peter Keys have formed a bonafide rock monster that benefits from the vast experience of the members. Apocalypse Cow Vol. 1 is SeepeopleS' third album, but it's easy to see that "the end" is truly the beginning for this one-of-a-kind band. --Bryan Rodgers