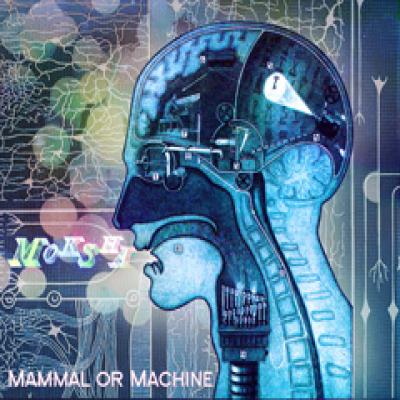 Moksha provides a soundtrack for a lavish journey through blues, funk, and electro soul.
Moksha's "Mammal or Machine" is an adventurous hour long journey through the rock, blues, and electronic music genres.  Fusing guitar and keys into longer, layered compositions has resulted in an album that easily ventures from genre to genre, even within moments of a particular song.  There is an old spirit at play in many of these songs, as the organ of "God's Country" summons us for the Revival.  This sort of throwback spirit contrasts nicely with the more modern styling of "Open the Door" and tracks in that vein.  The album is ambitious in scope and succeeds because of its nifty arrangements and excellent execution.  Moksha, currently based out of Las Vegas, Nevada, features the talents of John Heishman on bass and vocals, Patrick Gray on drums and percussion, Brian Triola on keys, organs and vocal, and Jeremy Parks on guitar and lap steel.  A large assembly of notable artists appear on certain tracks on this album, with DJ Logic being one of the more notable contributers.  The album features 11 layered, lush jams that range from ambient "chill lounge" tracks to feverish bluegrass romps.  The resulting combinations are deftly executed and charming.

"Mammal or Machine" begins with soulful, deep-fried guitar of "Bran Nu Junk" before a full horn section blares its enthusiastic arrival.  This song ambles by like a sultry Saturday evening, offering full-bodied soul and the hip-shaking swagger of spirited guitar.  "Blind to the Time" offers a similar dose of horn and bluesy rock, with an occasional flash of scorching guitar to color the scenery as well.  "Interface" begins in more placid waters and features the rather iconic (at least in "jam" circles) DJ Logic on turntables.  This song  displays excellent vocals and a relaxed, airy groove as it saunters to its conclusion.  "Island Thyme" incorporates a loose Caribbean vibe for a world-music "feel" that seems reminiscent of those great old Paul Simon albums "Graceland" and "Rhythm of the Saints."  From these buoyant beginnings, the song progresses with a loping conversation between guitar and horns.  "Say U Will" bleeps and blips its way out of the starting gate, then coalesces under a spacey combination of guitar and keys.  Windy Karigianes offers a lyrical delivery that reminds me of some exotic chanteuse in a Parisian nightclub; part Blondie, part Johnette Napolitano.  The song  displays the pulsing rumble of rhythmic bass and layered synth effects,  completing its panoramic ride with a guitar solo that would make Frank Zappa proud.

"Open the Door" begins with layers of ambient noise (provided again by DJ Logic), keyboards and guitar that yield to Angela Kerfoot's vocals.  This track culminates with slick keys embellishing the sparse, simple thread at the root of the song.  The vast "Morning Fog" spotlights exploratory guitar over an understated backbone of drums and bass.  Psychedelic vocals reminiscent of old Pink Floyd dot the latter measures of the track.  "Easy A" possesses a carefree spirit and lyrical guitar, lightly picked, over a foundation of drums, bass and atmospheric keys.  "Bobbin on the Sea" features nice interplay between keys and guitar, as the two instruments swell and alternate in intensity.  "Trouble," with its rowdy bluegrass sensibility, invokes such Phish "LawnBoy" classics like "My Sweet One" and "Bathtub Gin," both in spirit and execution.  The song features Brian Triola's spirited work on the keys across its seven minute voyage.  The frantic gesticulations of "Trouble" strike an interesting contract with the sedate, subtle beginnings of "God's Country."  This track begins lightly but closes the album in waters that hint at some gorgeous, gospel awakening.

"Mammal or Machine" showcases lush compositions steeped in blues, rock, and elements of electronica as well.  The resulting combinations are ambitious, well-executed, and result in an uncompromising "jam" album full of twists and turns.  Moksha is joined by a bevy of notable artists for this studio recording.  The results prove to be ambitious and entertaining.  Although Las Vegas claims them as its own, the tracks on this album suggest that wider audiences could be around the corner for the four hard-working lads in Moksha. 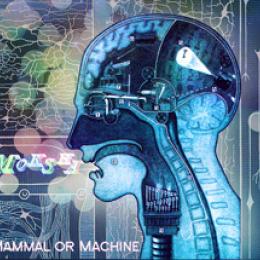 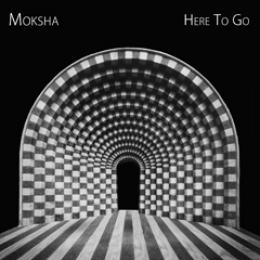