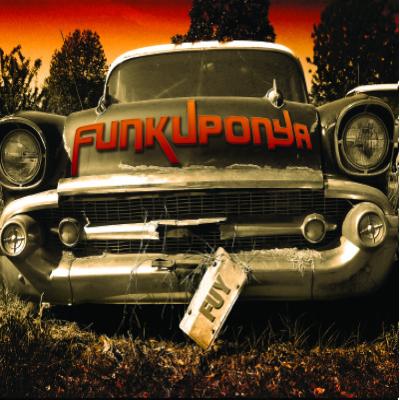 Funkuponya’s debut explores the boundaries between funk and jam with a scintillating combination of keyboard and guitar.
The members of Raleigh, North Carolina based Funkuponya first met through a chance encounter off Craigslist in the spring of 2008.  Featuring Doug Carter on guitar, Brian Werner on keys, Leo Kishore on bass, and Carl Blackwell on drums, the band members create a savory and surprising stew in the tracks on this album.  The members of the band claim influences ranging from John Scofield, Martin, Medeski, and Wood to Galactic and Jimmy Smith.  These varying styles are juxtaposed against hard, syncopated grooves that invoke the spirit of New Orleans and the Funky Meters.  The songs on this ambitious debut explore jazz idioms; crystalline guitar meshes with lingering keyboard over layers of drums, percussion and bass.  Polished guitar mingles with stratospheric keyboards to keep the listener on their toes; the lover of guitar and keyboards will find much to chew on in the tracks of "Funkuponya."  All the while, the no-nonsense rhythm section keeps these compositions honest and forward-moving.  The songs on this ambitious album incorporate the best elements of jazz, funk and jam, creating tapestries of sound that will be surprising and exciting to the uninitiated.

Funkuponya's debut album begins on the strength of "Disco Kid," as Carter's guitar ambles along, contrasting nicely against keys, bass, and drums.  The song changes gears on the drop of a hat, sliding into a striking guitar jam that keeps the track up tempo and forward moving.  Werner's keyboards swell into focus in the latter measures of this song, and he delivers with enthusiastic aplomb.  "Hot Air Balloon Chase" rises into prominence, displaying nice interactions between keyboards and drums.  The song displays excellent bass playing and Kishore's songwriting capabilities.  Carter captures the listener's focus on this track with his spirited, intense guitar playing.  After an exploratory turn, Carter yields the floor to Werner's keyboards, and the resulting jam is stellar, with Werner galloping along frantically to the song's conclusion.  "Mr. T Bag" displays a fun sensibility and excellent rhythmic work.  "Bernie Mac" ambles along in a carefree manner and lopes from its leisurely beginnings into a bouncy keyboard jam that is charming and well-executed.  "Jim's Chicken," written by Brian Werner, features hard rhythm and funk grooves that transition nicely into an exploratory guitar solo.

"The Garlic" features excellent bass, drums, and keyboard, creating an interesting groove from which Carter's guitar solo rises.  "Copasetic" starts off frenetically and bounces from measure to measure like some whirling dervish.  The song then plants its roots in a majestic, spacey jam that would be appealing to the late-night crowd.  Carter's guitar dances around the perimeter of the composition, accentuating various passages, while bouncing off the contributions of his band mates with lilting precision.  "Gus" displays excellent keyboards and guitar, which happen to be trademarks of the album.  The album concludes with "I Love Craigslist," a tongue-in-cheek reference to the band's origin, and features excellent interaction between Werner's keyboards and Kishore's mathematically precise bass playing.

There is a definite synergy to Funkuponya's creations on this ambitious debut album.  Keyboards swell in intensity, fluctuate, and yield to guitar.  Guitar, keyboard, bass, and drums all interact freely, organically, and with gusto.  This provides for spirited, compelling arrangements.  The resulting recipes are well-delivered and excellently produced in the tracks of this debut album.  The album was recorded and mixed by guitarist Doug Carter, who has served in many different professional capacities in the music industry.  The members of the band all claim songwriting responsibilities for various tracks on the album, and the discerning listener will be satisfied with the album's dazzling, cohesive arrangements.  The arrival of this album will help establish Funkuponya as an up and coming player in the Southeast funk and jam scene.

(Writer's Note - Thanks to Leo Kishore for biographical detail.) 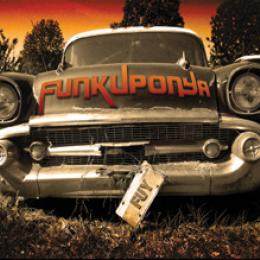