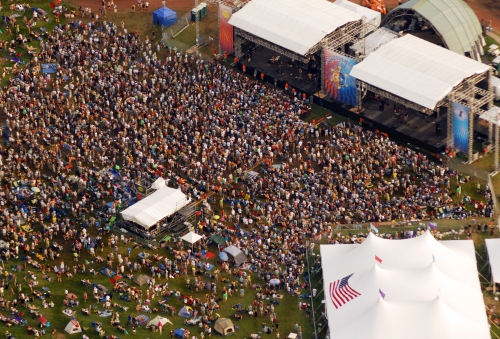 BRIDGEPORT, Conn. (April 8, 2009):  Crosby, Stills & Nash (CSN) will be among several extraordinary musical artists to perform at the 14th Annual Gathering of the Vibes, July 23-26, 2009, at Seaside Park, Bridgeport, Connecticut.  In celebration of the 40th Anniversary of the Woodstock Music and Arts Festival, CSN will be joined by fellow Woodstock participants Bob Weir of the Grateful Dead, Levon Helm, former drummer and vocalist for The Band, and activist Wavy Gravy, who will serve as master of ceremonies.

CSN, whose first gig together was in 1969 at Woodstock, will highlight a very special Sunday Family Day at the Vibes.  The final day of this year's four-day event also features performances from the world-famous Harlem Gospel Choir, progressive reggae artists John Brown's Body, neoclassic rockers Grace Potter and the Nocturnals, and legendary blues guitarist Buddy Guy.  To encourage families to make an event of the day, kids 15 and under will be admitted FREE with their parents on Sunday, July 26.

"This is a great opportunity for families to get out and some spend quality time with each other in an absolutely beautiful environment," said Ken Hays, executive director of Gathering of the Vibes.  "Last year, we had over 1,200 attendees under the age of 13 join us for an incredible weekend on the shores of Long Island Sound.  This is a chance for parents to share some of the music that makes up the soundtrack of their lives with the next generation."

* Additional artists to be confirmed.

Gathering of the Vibes 2009 marks the fifth time Seaside Park has hosted the annual music, arts and camping festival; the event is in the second year of its current five-year agreement with the City of Bridgeport. The all-ages, family-friendly festival drew 20,000 revelers per day to the 370-acre venue last year. The event caters to both weekend campers and single-day guests, all of whom have access to the park's shaded groves, manicured fields and more than a mile of Long Island Sound beachfront.

A limited number of advance weekend camping passes are on sale for $185 and
VIP passes for $420. Single-day tickets for Friday, Saturday and Sunday are also available in advance for $60 per day.  Kids 12 and under are free all weekend; and on Sunday, "Family Day," kids under 15 are admitted free, only with a parent.   For tickets or information, go to: www.GatheringoftheVibes.com <http://www.GatheringoftheVibes.com> , or call Gathering of the Vibes Festival 2009 Headquarters at 203.908.3030.


Gathering of the Vibes and Charitable Giving

Since its inception, Gathering of the Vibes and its fans have made "giving back" a priority and support numerous social causes. In 2007 and 2008 combined, festival organizers donated more than $75,000 to local Bridgeport charities, Connecticut Special Olympics and many other not-for-profit organizations. In 2008, festival attendees donated 2,500 pounds of non-perishable items to local and state food banks. The festival's bold "GreenVibes" environmental initiative ranges from an aggressive on-site recycling campaign, to educating fans about current research and development being done, and the progress being made in the field of alternative energy solutions.