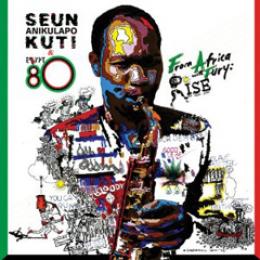 $11.98
With the mighty new From Africa With Fury: Rise, Seun Anikulapo Kuti heads up Egypt 80, the extraordinary combo first fronted by his renowned father. The album follows Kuti's critically praised debut, 2008's Many Things, which was unanimously hailed for continuing Fela's musical legacy. From Africa With Fury: Rise sees Kuti finding his own idiosyncratic voice as songwriter, singer, and band leader, its songs and sonic approach marked by provocative edge and mature self-assurance.

Co-Produced by Brian Eno, John Reynolds, and Kuti, with additional production by Godwin Logie, and mixed by John Reynolds and Tim Oliver, the album captures Seun and Egypt 80 s extraordinary power, fraught with the scorching rhythms and kinetic funk energy that has earned the band as ever, under the leadership of alto saxophonist Lekan Animashaun worldwide acclaim as one of today's most incendiary live acts. With Kuti's booming vocal stylings at the forefront, songs like 'African Soldiers' and 'Mr. Big Thief' are fueled by call-and-response hooks, breakneck tempos, and combative, topical lyricism which firmly sets the classic Egypt 80 sound in the modern era.

'I wanted to do something completely different,' Kuti says. 'Not different by trying to be American or European with my sound, just trying to make a very different album from my last album. My last album, it was my first time in control, I was not as confident as in saying what I wanted. This time, I said, Okay, I can be more confident in how I express myself, I can say what I want, be as complex as I want. '

Kuti was concerned that studios in his hometown of Lagos, Nigeria were not up to the job, so the album s basic tracks were recorded at Rio de Janiero's Cia. Dos Tecnicos Studios with veteran producer/mixer Godwin Logie (Steel Pulse, Horace Andy) behind the board. In the fall of 2010, Kuti made two visits to London where he mixed the record alongside legendary producers Brian Eno and John Reynolds. Eno an avowed fan who had previously invited Kuti and his band to perform at Sydney's Luminous Festival 2009 and the UK's Brighton Festival 2010 has nothing but the highest praise for Seun and his band, hailing them for 'making some of the biggest, wildest, livest music on the planet.'

Co-producer Reynolds (whose work as musician, producer, and mixer spans such artists as Sinead O'Connor, U2, and Natacha Atlas) agrees, applauding Kuti and Egypt 80's distinctive Afrobeat as 'a musical adrenaline rush.'