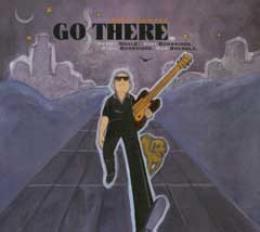 In November 2006, Scott Sawyer recorded Go There with Kenny Soule (Nantucket, Dag, PKM) on drums, Oteil Burbridge (Allman Brothers, Aquarium Rescue Unit, Oteil and the Peacemakers) on electric bass, Kofi Burbridge (Derek Trucks Band, ARU) on B3 & flute, and Ron Brendle (Big Octave, Frank Kimbrough, Mose Allison) on acoustic bass. The sessions re-united Sawyer & Soule after the split of the original Go There, which enjoyed a cult following in NC but disbanded in 2004. Also, Kofi and Oteil were re-united for their first recording together in 8 years. "There was no prior rehearsal and we had to work very quickly...but it was BIG FUN making this record and the music reflects that!"--Scott Sawyer.