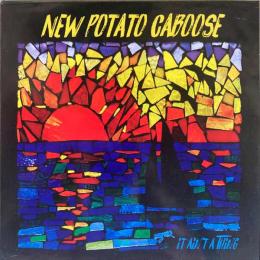 As the first band ever to play the iconic Wetlands venue in NYC, the roots of New Potato Caboose stretch back to the early days of the jam scene, where they started with trading shows and went to sharing stages with the likes of Blues Traveler, Widespread Panic, Dave Matthews Band, and legendary ground-floor acts such as The Band and the Neville Brothers. NPC was even featured in the Sundance documentary, Wetlands Preserved, and by the early '90's, the group was playing over 200 dates a year and garnered press in Pollstar, Billboard, and Variety.

It was at a recent concert where the inspiration for a new album came up. The vibe was so sweet that the band was struck by a mutual "a-ha moment" and set the wheels in motion on a project that would include unrecorded gems, live favorites, and brand new songs. The band was fortunate that John Alagia (Dave Matthews Band, John Mayer, Ben Folds, Lukas Nelson) was inspired to produce the project, tapping into the music scene roots they all share. John also brought in a talented team from the Red Light Management/DMB family, including engineering wizard Jeff Moxley (Blues Traveler, Plain White T's, The Chainsmokers) and L.A. mastering ace Whynot Jansveld (The Wallflowers, Sara Bareilles, Crash Test Dummies). The band and production team lived and recorded together at Haunted Hollow, Dave Matthews' private studio in Charlottesville, VA.

The final product is It Ain't a Thing, a snapshot that manages to capture both NPC's origins and the magic that is happening now. As a crowd-funded, independently-produced album, Caboose fans will share a huge part in its success. On It Ain't a Thing, you can hear the band deftly roll in influences from the laid-back party vibe of Little Feat, the mystic innovation of the Grateful Dead, the shimmering vocals of Crosby, Stills and Nash, and the relatable earthiness of The Band. These elements are interpreted and shaped by the extraordinary talents of members Doug Pritchett (acoustic guitar, vocals), Don Laux (rhythm guitar, vocals), John "Red" Redling (keyboards, vocals), Tim Pruitt (lead guitar, vocals), Mike Mahoney (bass), and the powerful double drums sound of John Trupp and John McConnell. Mix in the savvy original songwriting of the band, and the skill of the production team, and the result is a wide-ranging sound that is uniquely New Potato Caboose.