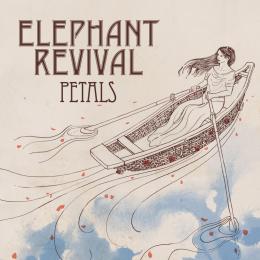 Progressive transcendental folk quintet Elephant Revival announce the April 1 release of their forthcoming album, Petals (Thirty Tigers). Formed in 2006, Elephant Revival is known for their thoughtful, literary inspired lyrics combined with an eclectic blend of arrangements performed with traditional folk instrumentation. The five songwriters and multi-instrumentalist's approach is unique and fearless as they create genre-defying, yet highly accessible, music that has continuously evolved into a signature sound. That sound has never been stronger than on their fourth and finest offering, Petals.

Guided by the songwriting and haunting vocals of Bonnie Paine and Daniel Rodriguez, Elephant Revival has as much in common with American roots music as it does with indie rock. The songs on Petals touch on themes of love, overcoming loss and following your own path while remaining connected to others. Bandmates Bridget Law, Dango Rose and Charlie Rose add beautiful harmonies and superior musicianship, creating an ensemble of guitar, fiddle, washboard, cello, bass, horns, pedal steel, mandolin and banjo.

Since the 2008 release of their first album, Elephant Revival has been making an impact on all who hear them and experience their intimate and lively performances. The UK's Maverick Magazine said, "Elephant Revival is not only one of the more interesting bands working on the American roots scene but one of the best...they have talent and chops to burn and confidence in what they do. Confidence that's fully justified," while The New York Times said, "If this doesn't make you smile, something is wrong with you."

Elephant Revival has toured extensively since their inception, garnering a large and loyal fanbase. The band headlines major venues and has performed at over 30 festivals each year, including Newport Folk Fest, Bumbershoot, Telluride Bluegrass, High Sierra, All Good and many more. On May 22, Elephant Revival will headline the legendary Red Rocks Amphitheatre in their home state of Colorado for the first time.

Petals was produced by Sam Kassirer (Josh Ritter, Lake Street Dive, Langhorne Slim) and recorded at the Great North Sound Society in Parsonsfield, ME and The Studio at eTown Hall in Boulder, CO.