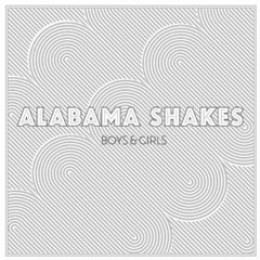 $11.98
In October 2011, the Shakes gave a performance at the CMJ Festival in New York City that earned a glowing review from the New York Times. Jon Pareles described the band as "a thunderbolt dressed in bluejeans," with music that's "aching when it's slow and growling and whooping when it's fast." NPR named them one of the best bands of 2011, while MTV called them one of the top bands to look for in 2012.

As word of mouth spread, more offers to tour came in, and the band members were finally able to quit their day jobs; until this point, all the writing, recording, and touring had to be done around such responsibilities as Howard's work as a mail carrier and Johnson's hours toiling as a night watchman at a nuclear power plant.

Now, with expectations at fever pitch, the Alabama Shakes have delivered Boys & Girls--six of the songs from that initial Nashville session, and another five recorded during the rest of the year. From the heart-rending title song to such stomps as "Rise to the Sun," the album demonstrates the sense of groove and space the band learned from their idols, along with a blistering force and emotion that simply can't be learned.

Overwhelmed by the response they've already received, there is one perception of the band that they want to challenge. "A lot of people think we're a soul revival act," says Cockrell. "That's an honor to me, classic R&B is my favorite kind of music, but everybody has their own influences. Brittany is way more into rock and roll--she likes things pretty amped up most of the time."

"Retro soul is not what we're going for, though it's understandable why people say it," says Howard. "We take inspiration from that, but we all understand Black Sabbath, too. On the record, we left a lot of room for whatever we want to do in the future."

The release of Boys & Girls marks the arrival of a major new rock and roll band. To the members themselves, though, what's been most exciting has been the reaction they have felt on stage, whether tiny local dates or under the glare of the media.

"It seems like everyone can tell how into it we are," says Cockrell. "Every show, people say they can feel how much we love what we're doing."

Track List:
Hold On
I Found You
Hang Loose
Rise To The Sun
You Ain't Alone
Goin' To The Party
Heartbreaker
Boys & Girls
Be Mine
I Ain't The Same
On Your Way