Trinumeral returns to Deerfields for another year of fantastic music.

By Brad Winecoff
Photos by David Oppenheimer @ Performance Impressions
This year's Trinumeral, set on the week of 9-9-09 started on Wednesday the 9th with a bang at the Orange Peel Social Club in Asheville, NC with the official launch party. Blistering sets by The Egg, one of England's most promising acts, Lipp Service, which is the combined forces of Alex B and Lane from Pnuma Trio along with versatile electronic producer Eliot Lipp and Brendan Angelides, aka "Eskmo", who is a San Francisco based music producer & live performing DJ set the tone for the next three days of music which was held again at Deerfield's music venue, one of the most beautiful unspoiled places on the east coast.

Coming into the festival proved to be smooth sailing. Checking in and being directed into the festival was very organized, although they did not have my name correct at the gate everyone was very accommodating and understanding.  Security was very prevalent with three different checkpoints along the way to the festival. After having my arm tugged 3 different times by security I was in.  Once camp was set up on the back lake I was ready to see some good music.The program guide this year was a vast improvement from last year's post card. This year there was an actual guide with many pages providing excellent information about the artist, their scheduled times and other informative festival happenings. 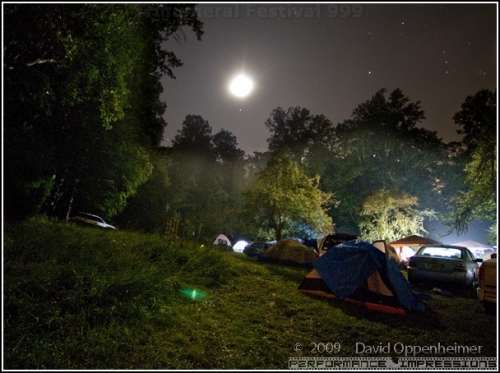 Getting there a little late I was able to see the start of the main stage acts, the Asheville based band Silver Machine who set the mood with a very grooving, danceable set, followed by the always fun Asheville Horns on the second stage (Pond stage). They seemed to have difficulty with the sound that continued throughout the weekend.  The big highlights of the evening were definitely Pnuma Trio along with the Disco Biscuit side projects M80 Dubstation and Conspirator. With everyone in a dancing frenzy it set the stage for a plethora of glow sticks and LED hoops which was visually stimulating to say the least. After those sets I was off to rest up for the days ahead, let the DJ's play on till the wee hours of the morning.

The next morning was beautiful; waking up to the thick steam rising from the lake and the beautiful sunrise, I was ready for a full day of music.  I broke out the schedule only to find out to my dismay that music didn't start until 2pm which I found very disappointing.

The late start in music gave me time to meander around the festival grounds to see what Trinumeral had to offer.  At first glance I noticed that the festival did not have any decorations, unlike last year's festival which was very innovative with so many active visual props. This year it looked so barren, whoever was in charge of decorations really didn't show up. Upon further exploring it was nice to see Elliott Toan of Conscious Alliance setting up their food drive for a great cause.

Getting wrapped up in my surroundings before I knew it, it was already 4pm and I needed to get to the main stage for some good ole Josh Phillips Folk Festival who I believe in going to be the next big thing to come out of Asheville, "Josh has truly provided a strong testament to his ability to effortlessly capture generations worth of musical evolution, and traverse years of cultural dilution, bringing the listener back to the very source of roots, folk, soul, r & b, rock and reggae". His set was a nice turn from the mostly electronic music that I had heard up until now.

After that set I was geared up to see some Zach Deputy who was another pleasant addition to the festival.  "Truly a one-man band, he is a powerhouse of performance, technical chops, and one hell of a charismatic presence". 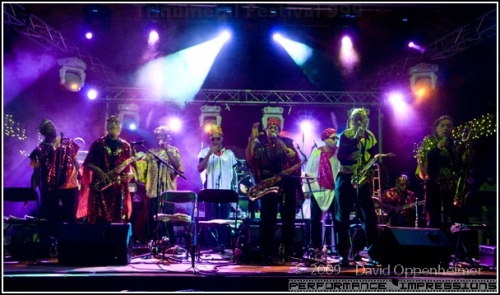 The next order of business was Sun Ra Arkestra who I was fortunate enough to listen to from my camp.  I had heard all about them from a friend how they are continuing the sage of the late Sun Ra who was the first jazz musician to perform on an electronic keyboard (56), the first to pursue full-scale collective improvisation in a big band setting, and his preoccupation with space travel as a compositional subject. The noise that radiated from that stage was like none I had ever heard. I don't even know how to classify it, Wow! Think of the craziest jazz you have ever heard then play it backwards and that pretty much sums up that set.

With another great night of music in our grasp, Boombox was next on the list. The pond stage had yet another mishap on sound but after a 30 min delay it was dance time, they delivered an intensely high energy show, the place was as packed as I had seen it all weekend which made me wonder why these guys weren't on the main stage performing. 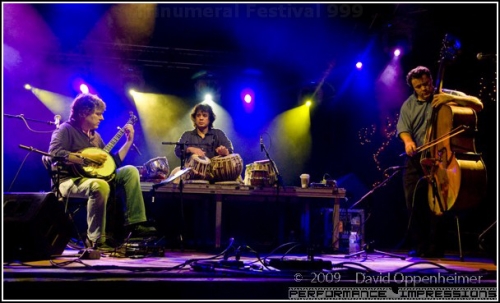 This brings us to the climax of the festival, with the collaboration between banjo virtuoso, Bela Fleck, composer and double-bass master Edgar Meyer and Zakir Hussain, arguably the world's greatest tabla player. With this intimate feeling it was magical to see those three perform on stage. I now understand how they can have Billboard's # 1 Traditional Classical Recording. 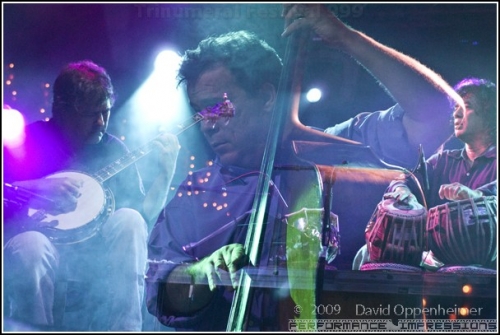 Next on the list was another DJ set, Break Science feat. Adam Deitch, who I had heard was an incredible drummer who had played with The John Scofield Band and many other great collaborations. It was a nice blend of trip-hop, broken-beat & dub that did not disappoint.  I really wanted to see Orchid Lounge and The Egg but just couldn't hang plus I had another full day ahead.

Today was a good day, the weather was perfect, the surroundings were breathtaking and the music started at 11am. The Burnin Smyrnans were the first to start off the day with their nice grooves with a reggae twist; it was just the right sound to start off the day, not to mention yet more problems with the sound which seemed to be the theme for the pond stage for the weekend.

Later that day I had the privilege to see the band that had played Trinumeral since its inception back in 2001, Incognito Mosquito who are always fun and full of energy delivered a great set. The band following next were my good friends The Mantras, after the sound difficulties were ironed out of course on the second stage, they gave a mind blowing performance, the sound of those blistering guitars was enough to thrust you back to your tent, it was definitely the loudest yet most enjoyable show of the weekend.

Following The Mantras, I finally made it up to the third stage (PLATEAU STAGE) where I caught a surprising set by Arpetrio who was loaded with talent with their livetronica sound.  I love it when bands I have never heard of can captivate me like that. Their creative sound is a fusion of the finest elements of live electronic, psychedelic, trip-hop, and jazz-fusion. 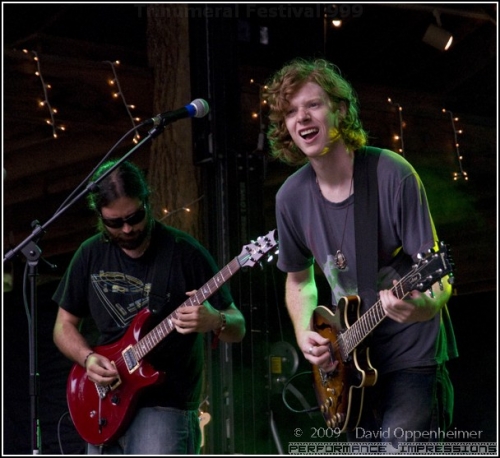 On my way to the next performance I checked out the VIP tent to see what it was all about, at a glance the tent, with a couple of DJ booths set up with an allotment of comfortable couches and a bar. Next stop was the main stage, where the always fun band,The Heavy Pets entertained the crowd with their funky phish like grooves.

The Malah from Greenville, SC was next on my list to see.  I was pleasantly surprised with the sounds protruding from the pond stage.  I was thinking it was going to be a nice mellow set but the melodic sounds turned in to high energy electronic dance music which seemed to really get the crowd dancing. 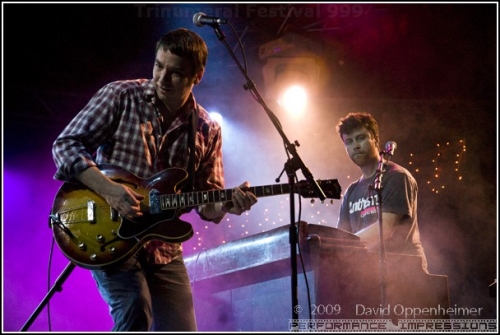 The last night was upon us at Deerfield's and it was sure to be a fantastic one with The New Master Sounds on the main stage, Yet another band from the UK that just blew me away, This set was so energetic and full of life I am happy to say it was my favorite of the whole weekend.  With the Asheville Horns helping keep the beat, the music was sweeping the crowd off their feet.  These guys can jam! 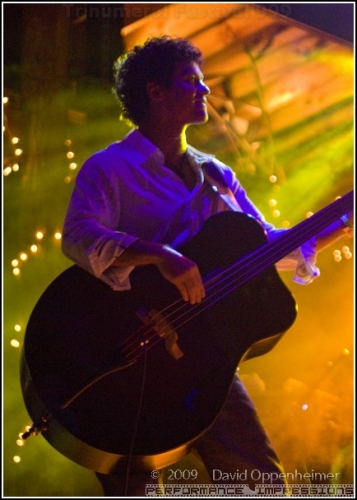 After such an enthralling set I was ready to rest but no! There was more to come with Asheville's favorite Toubab Krewe, the set was as expected very good.  One of the highlights of their set was toward the end when they brought out laptops and began beating on them with drum sticks saying "Toubab's first ever live laptop PA set. " It was one of the funniest things I've ever seen, watching them beat the hell out of those computers and picking them up and slamming them to the ground was just awesome. It was a kind of slam in your face attitude towards the saturated electronic scene here at the festival. 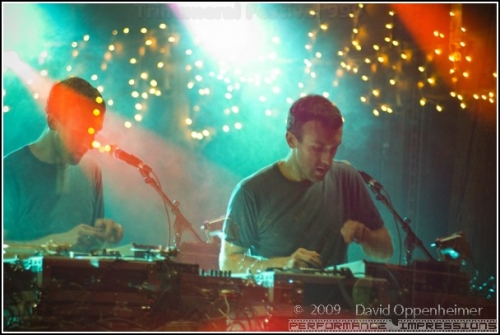 Next it was time to get ready for the best DJ's of the weekend RJD2 and Pretty Lights who are both very good at what they do. I knew what to expect with RJD2 and his ability keep the crowd pleased with his hip-hop mixes. Then there was Pretty Lights who was the talk of the festival, I had never heard so much hype than I had for him.  I was pumped up to see what he had to offer.  The beats that came off that stage were fantastic I can see the reasoning behind the movement of Pretty Lights. I was over taken a curiosity because just recently he had come to Asheville and had played an after party in a very small venue that holds no more than 120 people, that was no more than 6 months ago and now he is head lining festivals, selling out top notch venues across the country, and really taking the scene by storm. I now see what all the fuss is about.

Sunday to my dismay there was no music. There was however an art auction which auctioned off all the art painters made during most sets of music throughout the weekend. 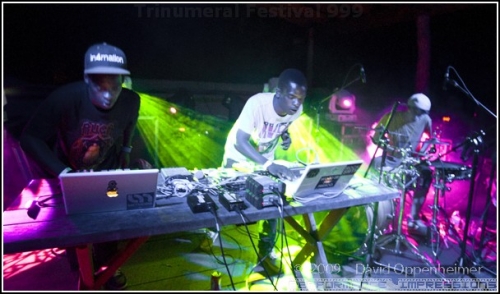 All in all Trinumeral was a good music experience but the lack of decorations and props which seem to make a festival a place where you have a feeling of being part of the event was just not there.  I look forward to seeing Trinumeral on 10/10/10.