The 34th annual edition of Farm Aid was held at the historic Alpine Valley Music Theater in E. Troy Wisconsin on Saturday, Sep.21st.

Assembled artists for the event were the usual cast of: Willie Nelson, Neil Young, John Mellencamp, and Dave Matthews with Tim Reynolds. Also appearing on the bill were a venerable who's who of Lukas Nelson & Promise of the Real, Tanya Tucker, Bonnie Raitt, Nathaniel Rateliff & The Nightsweats, Jamey Johnson, Margo Price, and country music superstar Luke Combs.

The weather was mostly wet for the sold-out Wisconsin crowd of 40,000 plus. Although it is a single day event, Farm Aid is an all day affair. Gates at the venue opened at 9:00a.m for attendees, some of which had been there before the dawn. At 10:00a.m. the annual press conference began with international press corps to detail the Farm Aid mission. In attendance with the Farm Aid board members and artists were local Wisconsin farmers and Native Americans to discuss the hardships they face within the farming community. 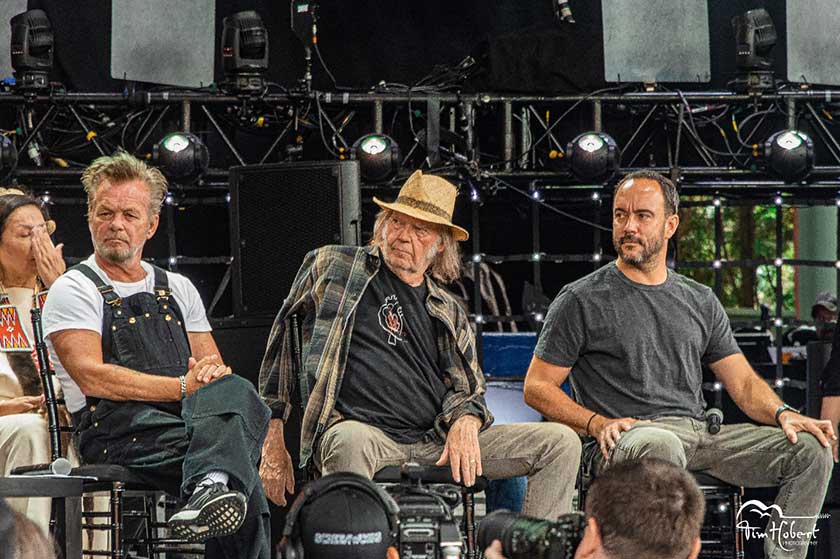 The press conference was sobering. The facts that surround the decay of the American farm are dismal. In Wisconsin alone, 3 farms are lost daily. The family farmer receives only $.14 for every dollar spent by the consumer at the grocer. Only $.50 is received for every 100 lbs. of milk taken to market. Heirloom seeds are being lost at an alarming rate. And, topsoil degradation and loss prevent many farms from continuance. Those are the reasons for Farm Aid. It is why for well over three decades now the concert takes place. It is a steep uphill climb for the American Farmer.

Oh yes, there was music! Lots, and lots of GREAT music! The first performance began at noon with Yola. Yola is a bright newcomer hailing from the U.K. with soul sensibilities that are reminiscent of early Stax recordings. She ended her performance with Elton John's "Goodbye Yellow Brick Road". Her energy was the perfect start for this great day! 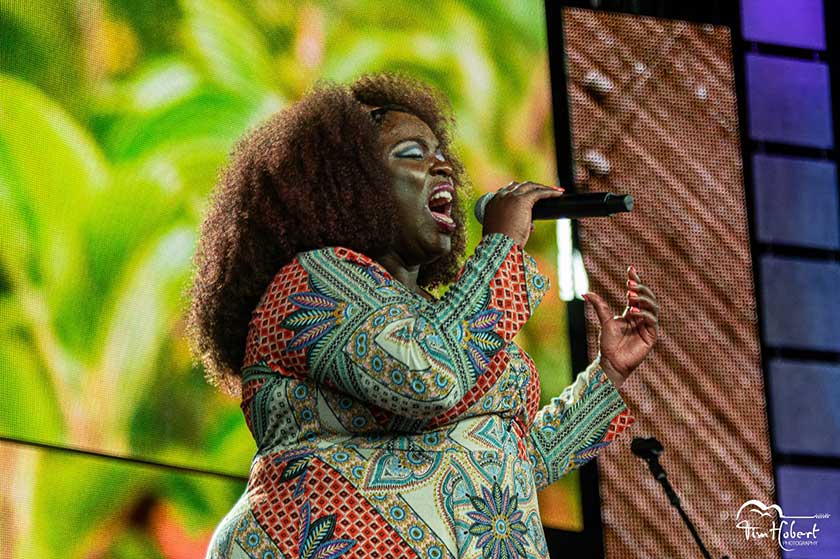 After the next performance by country music legend Tanya Tucker was cut short by technical issues (did I mention the rain?) Lukas Nelson & Promise of The Real played a great set with the help of Margo Price and Nathaniel Rateliff. The young Nelson is primed for super stardom. He and his bandmates' set was filled with goodwill, and had an amazing rendition of the CSNY classic "Carry-On" with a sit-in with a young guitar slinger that appeared to be less than four years old! Lukas Nelson appears willing to take Farm Aid forward for years to come. He continually supports the farming community. And, he was virtually everywhere on the Alpine Valley grounds discussing issues with farmers, vendors, and concertgoers all day. Lukas Nelson will be a great ambassador for Farm Aid in the coming years. 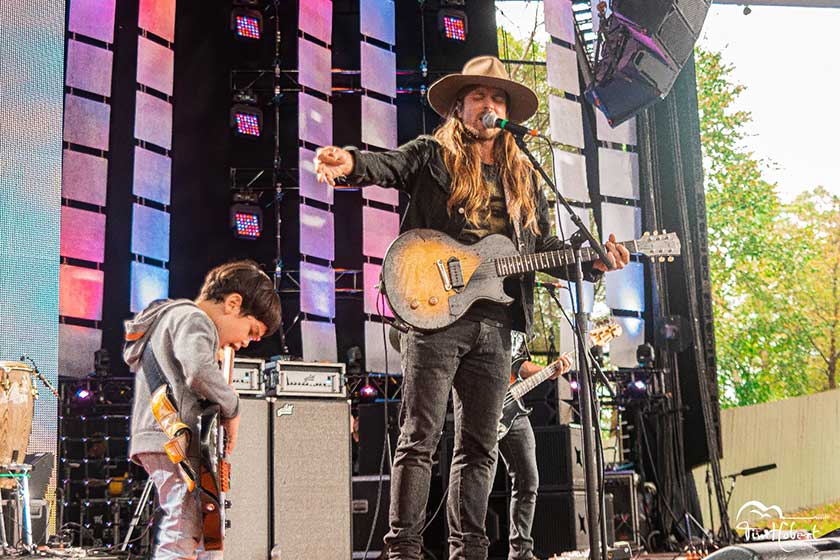 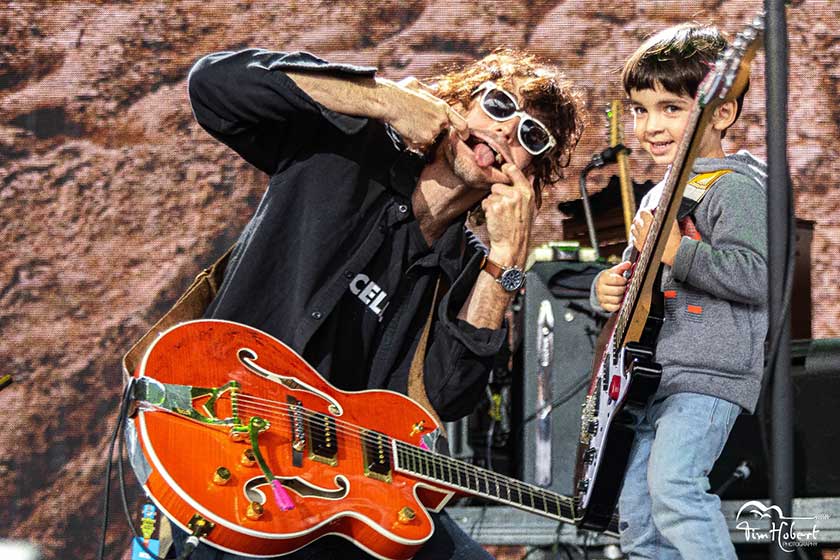 After taking the stage with Lukas Nelson & POTR, Aledo, IL. native and current Nashville mainstay Margo Price brought her band to the Farm Aid stage for a rousing set that included a tribute to Elvis Presley. Margo seemed genuinely moved by the event and told the crowd her parents lost their family farm during the 80's in Illinois. It was a sincere moment in a day of great emotion on the stage. 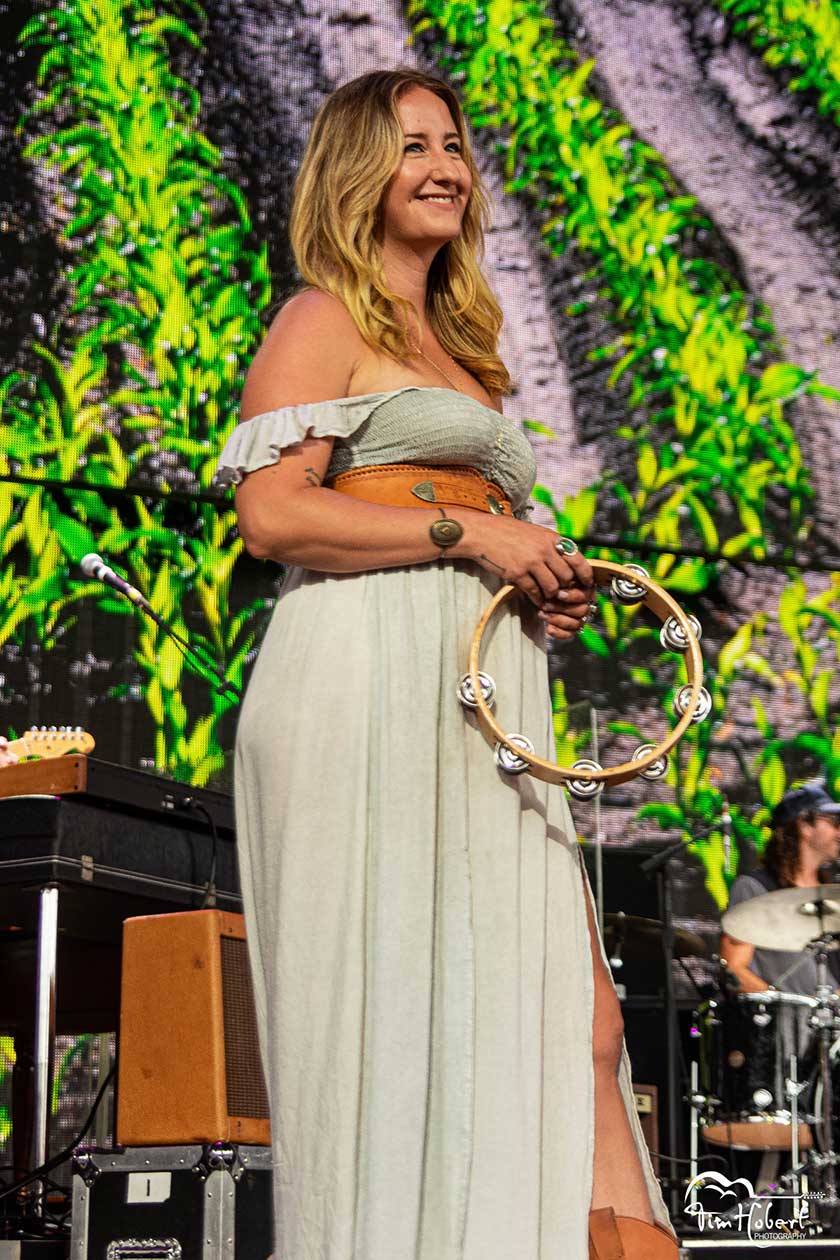 The next artist was Jamey Johnson, and he delivered possibly the most emotional moment of the day with an a cappella version of his anthem "In Color" followed by Woody Guthrie's "This Land Is Your Land". The crowd including several veterans sung along to the patriotic anthem in a heavy downpour that didn't dampen the spirit what-so-ever. 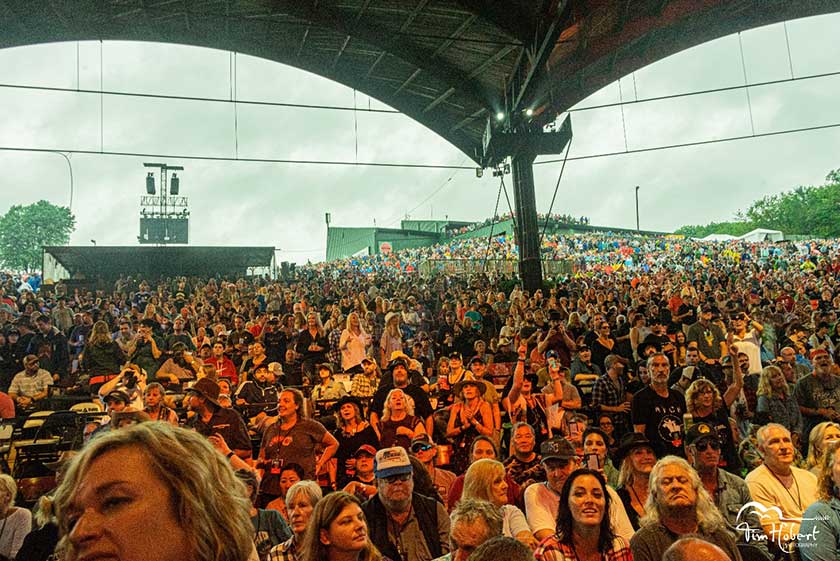 Nathaniel Rateliff & The Nightsweats had the dubious task of following up. And, were they ever up to the task! The crowd hung on their every note singing and dancing in the rain to his hit "S.O.B." and other catalog favorites that included "Hey Mama" off his latest release. 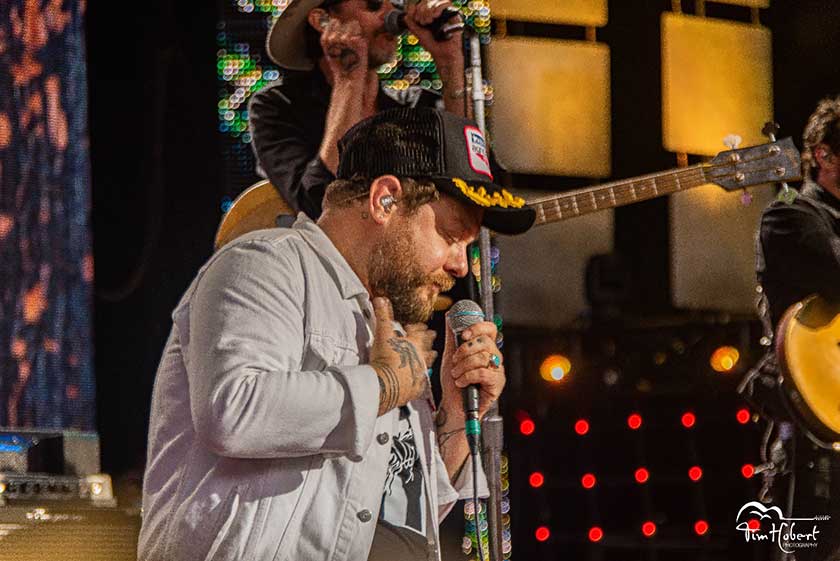 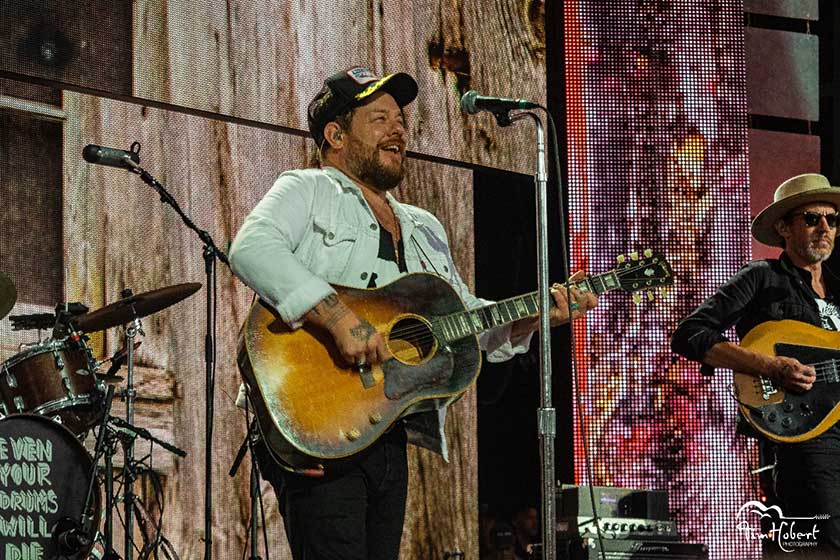 Asheville, NC native son Luke Combs brought his country superstar show to Alpine Valley next. In the crowd were many of his fans who wore Luke hats and gear. His star has ascended quickly into the stratosphere in the past year. However, he wanted to make sure the huge crowd knew he was a Carolinian, an Appalachian State Mountaineer, and still a mama's boy at heart! The crowd loved him. He was a perfect fit for the Farm Aid crowd. 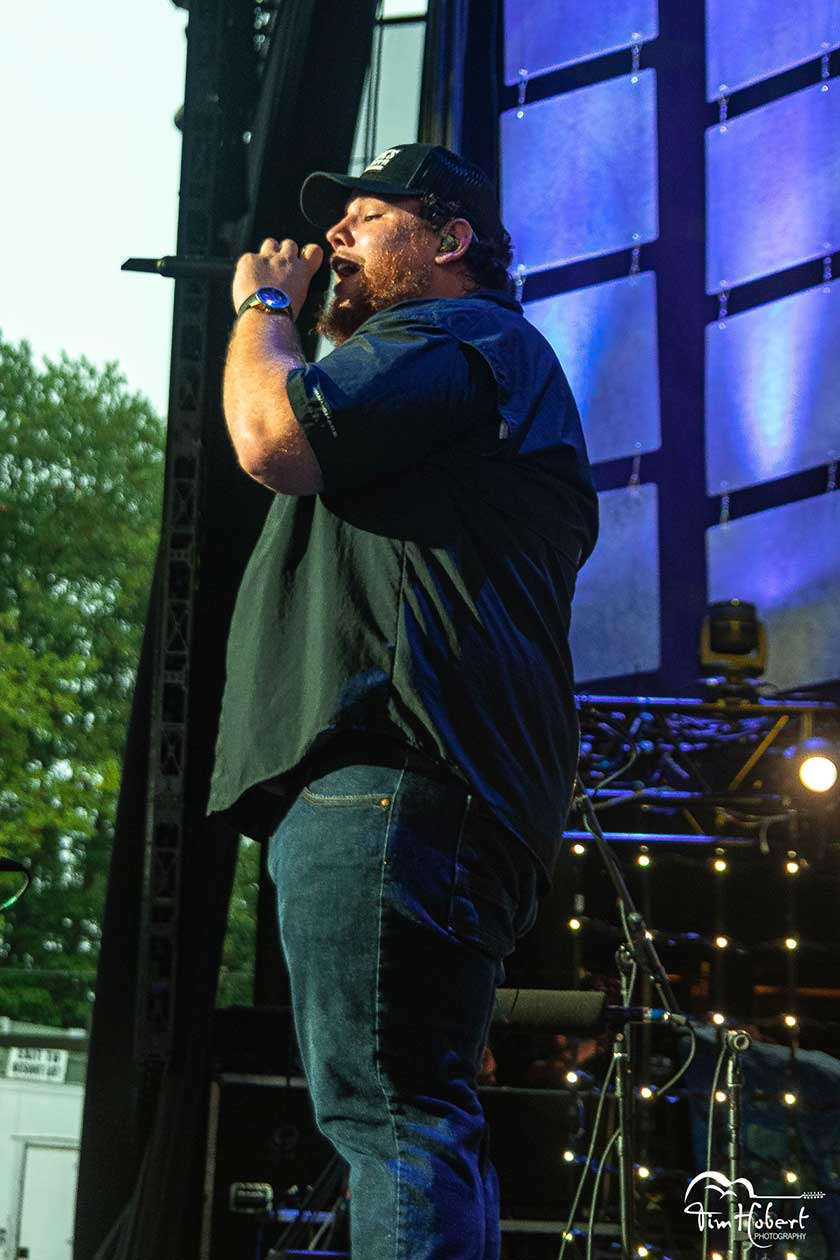 Dave Matthews and Tim Reynolds played next with an acoustic set that relied mostly on DMB cover songs leaning heavily on themes based on loss and redemption. Tim Reynolds showcased his talent with a solo that left his counterpart utterly speechless apart from a call to the crowd of "I'm freaking out with THAT Farm Aid!!!" 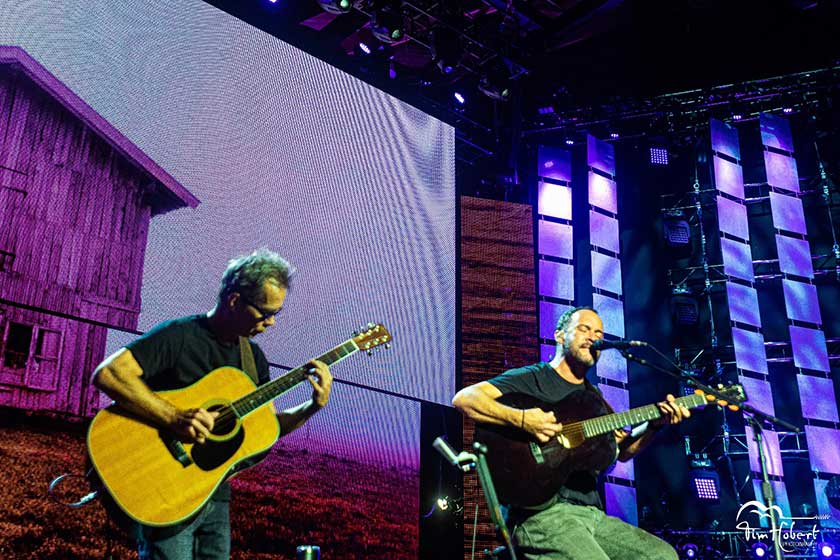 John Mellencamp has been part of Farm Aid all 34 yrs now. His passion for the Midwest and the American Farmer is well chronicled with many anthems that include his penned song about their loss on 1985's "Scarecrow". Mellencamp is loved by the American farmer and it showed during his passionate hit-list of a set that included: "Cherry Bomb", "Crumblin Down", "Authority Song", "Pink Houses" and the show stopping "Check it Out". John Mellencamp delivered BIG-TIME! His set was arguably the best of the day and had most of the 40,000 dancing in the mud. John Mellencamp epitomizes Farm Aid and it's goodwill mission. 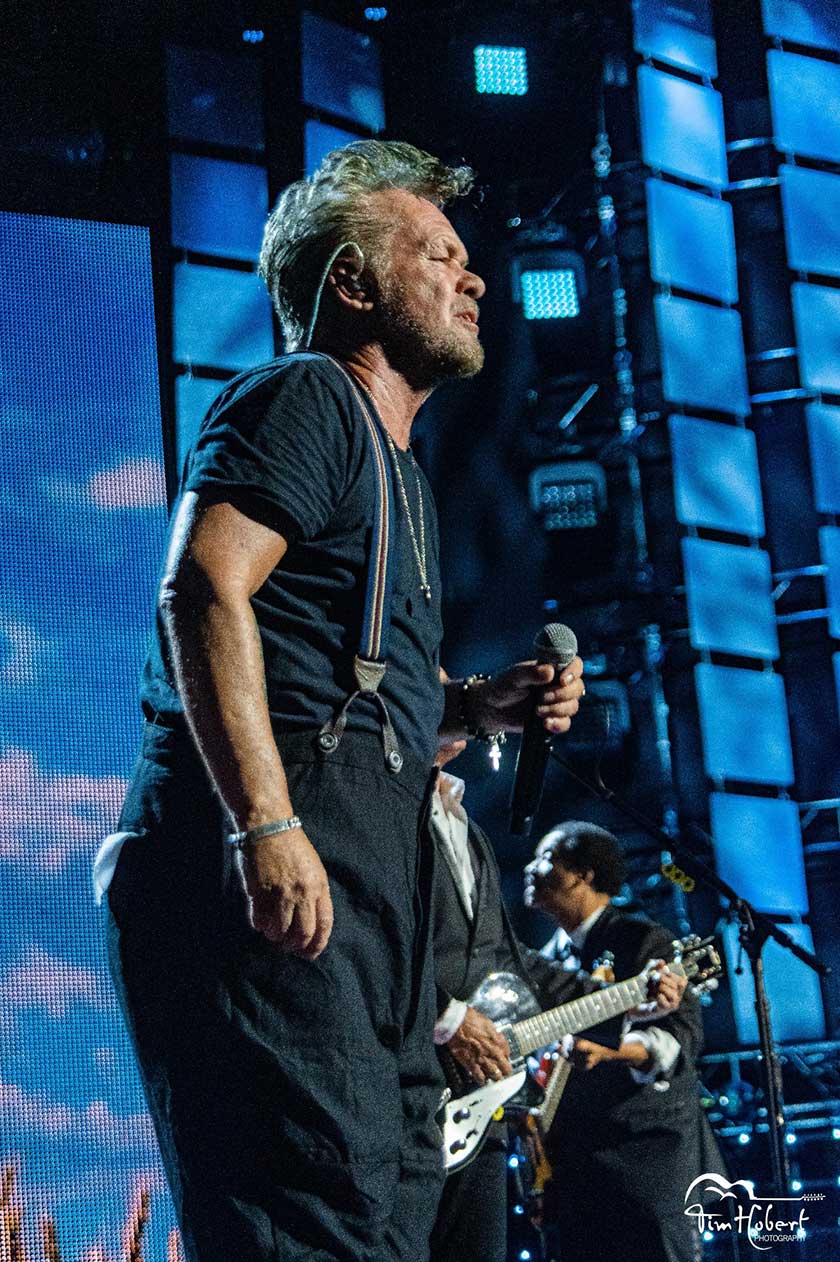 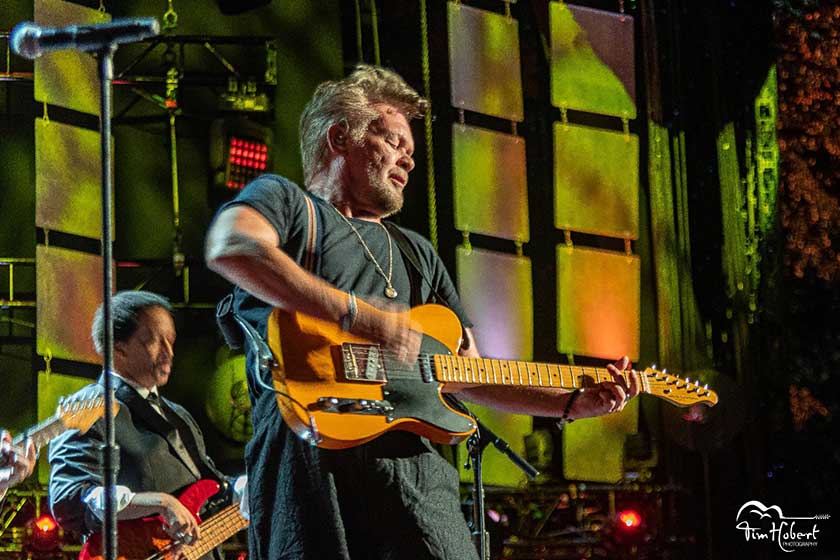 Neil Young was the next performer who shared the stage with his band comprised of members of Lukas Nelson & Promise of The Real with Micah Nelson on guitar as well. The set began with a rousing version of "Are You Ready For The Country" while playing piano. The entire set was themed on a hard day's work and the American farmer. a stunning version of "Harvest Moon" was rendered followed by "Heart of Gold". Lukas Nelson with his brother Micah are the perfect compliment to Neil young. They seem to understand intuitively Young's intent within each song, and how to present that intent to the audience. When Young's "Rocking In The Free World" began near the set's-end, it was the brothers and Young at center stage, each providing their own grungy moment within the context of the song. The moment was spectacular. The set was amazing. It was perfect Neil Young. 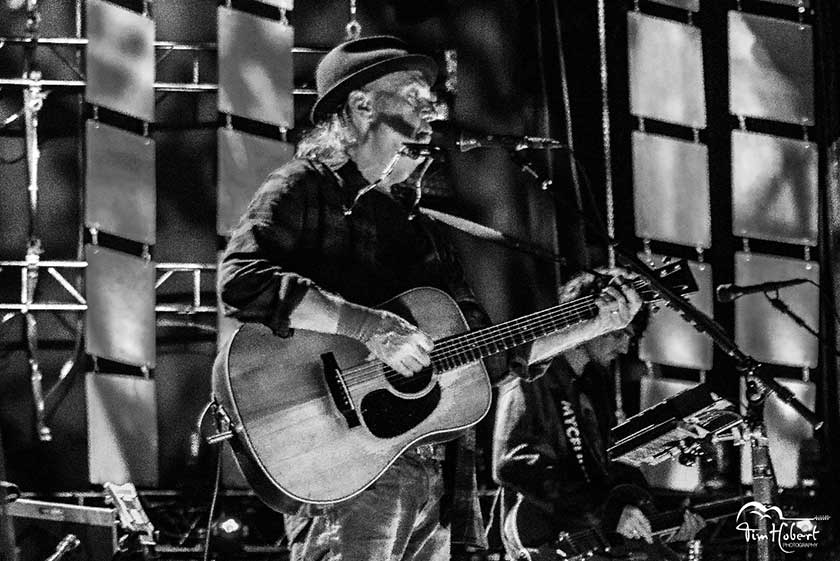 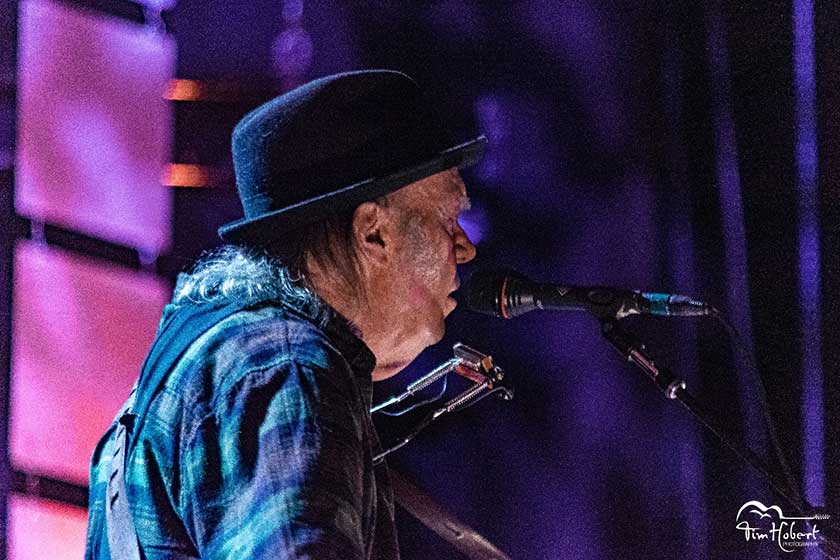 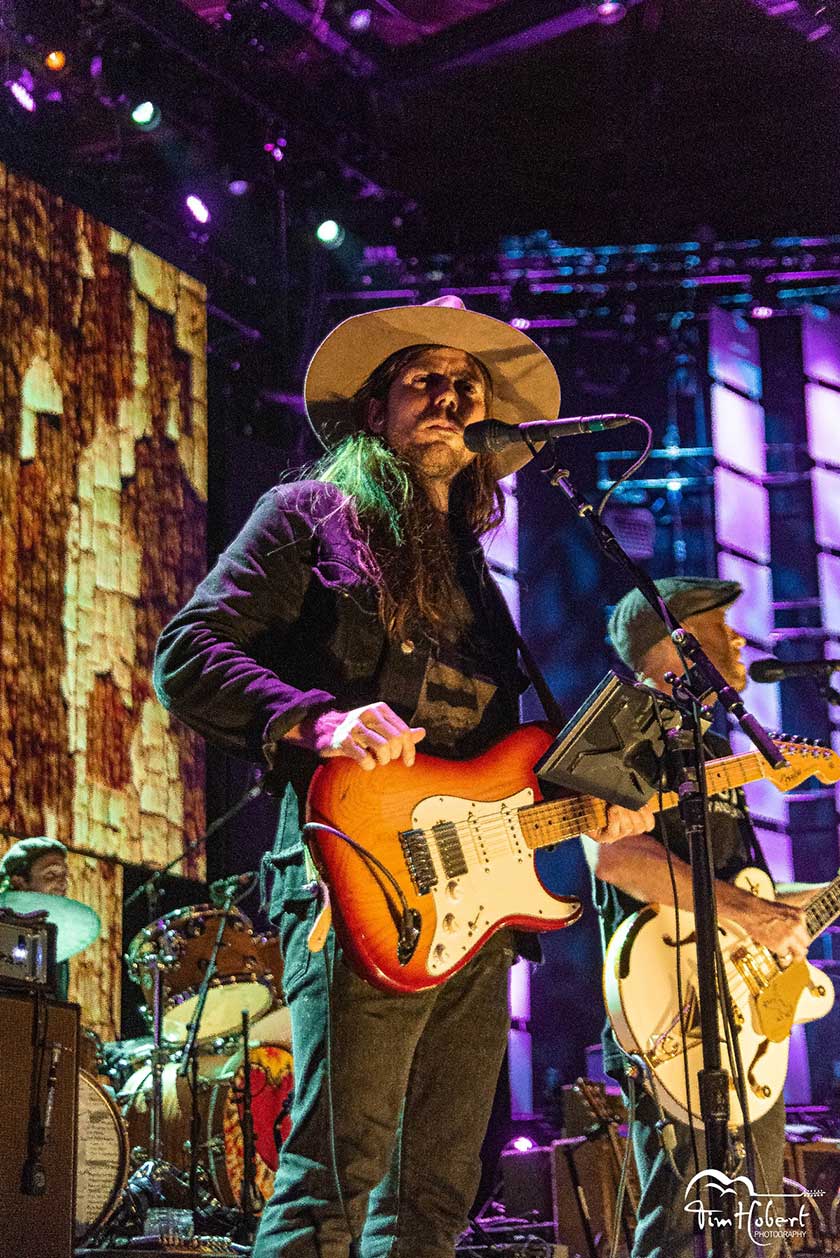 Last on the Farm Aid 2019 list of performers was the founder, Willie Nelson and The Family Band. What can possibly be said about Willie that hasn't been said? He is an American icon. His set was performed with his long-standing bandmate Mickey Raphael on Harmonica and his sister Bobbie Nelson on piano, along with sons Micah and Lukas in tow. The Family Band are great. Their 1000's of shows performed together are akin to what brought 40,000 plus fans to Alpine Valley that Saturday... The American Farmer. The 11 song set began with "Whiskey River". Lukas took the mic to give remembrance to Austin's Stevie Ray Vaughn who perished in a helicopter crash directly behind the stage. The band then played a version of "Texas Flood" with Lukas on vocals. The set relied on Willie staples and culminated with the entire Farm Aid cast for a show stopping "I Saw The Light / Will The Circle Be Unbroken / Fly Away". It was a perfect ending to an amazing day of music. 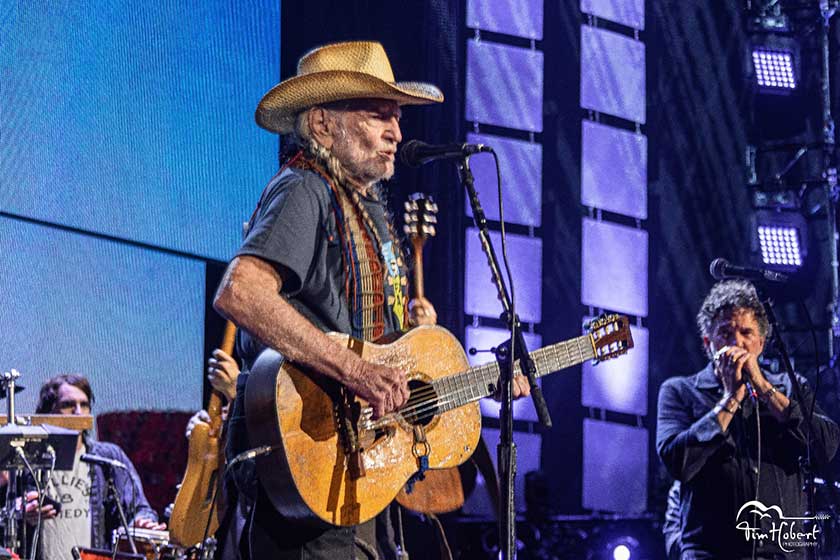 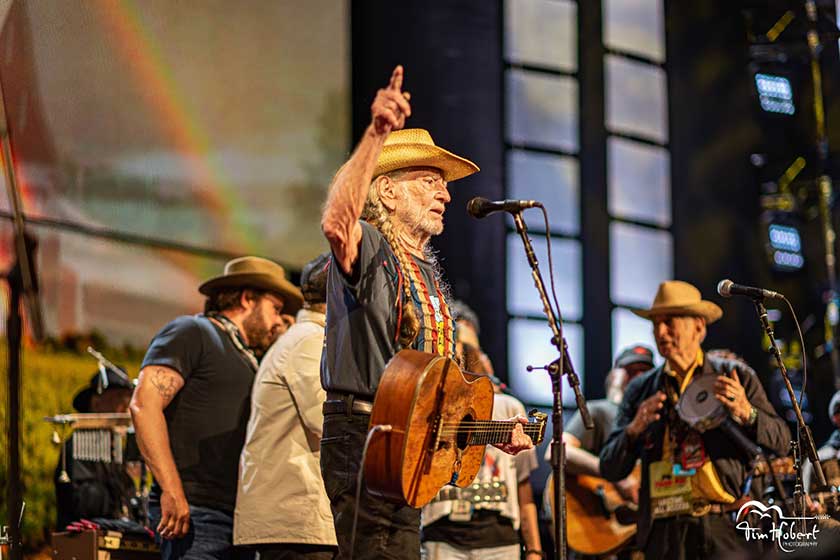 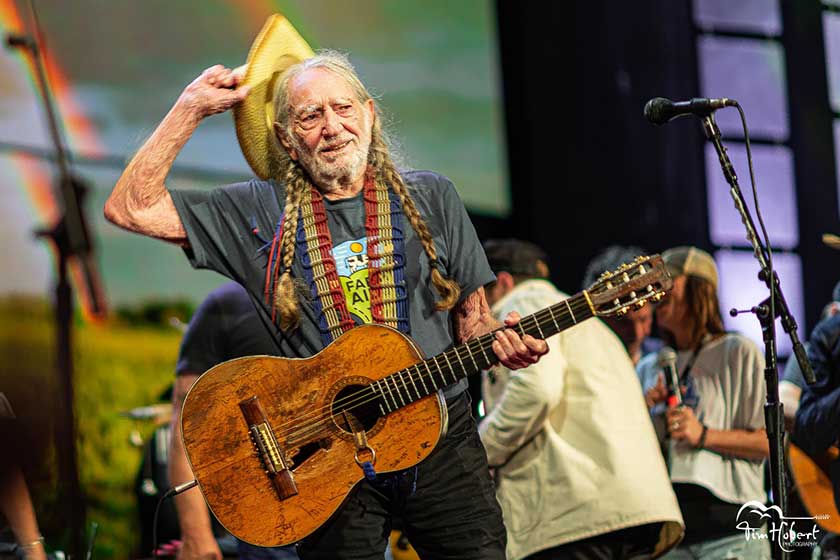 Farm Aid 2019 was an amazing day filled with great moments from the stage. But, what made the event so special was the goodwill and camaraderie shared by everyone involved. The vendors went the extra distance. The staff was exceptional. Law enforcement all had smiles on their faces and reported no crowd issues whatsoever to me. Every performer left their heart on the stage. I don't recall witnessing a such a huge group hug as I did at Farm Aid 2019. Please help support the dying American family farm and Farm Aid at www.farmaid.org

- words and photos by Tim Hobert