Big Something returns to Greensboro, making a larger splash at the new Blind Tiger

Greensboro’s Blind Tiger has been open for over 20 years, and has long served as a haven for independent music. Tons of memorable artists have graced the Tiger’s stage in those two decades, so when word filtered through the ranks that the Blind Tiger might possibly close, many of the locals anticipated a void that would not be easily filled. After securing a new lease and establishment, The Blind Tiger has closed up shop at its old Walker Avenue location, and moved just down the road to a nice, new location on Spring Garden Street. My last show at the “old” Tiger was in December, where Big Something and the Native Sway played to a packed, enthusiastic crowd. When I heard that Big Something would be playing March 4th at the “new” Tiger, I looked on this as a nice opportunity to craft a review for Homegrown. I had not been to the “new” Tiger since its opening, so I liked the symmetry of “closing” the Old Tiger and “opening” the New Tiger with the same band. 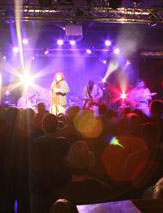 The crowd for the show was large and energetic, but this is hardly surprising considering the verve and loyalty of the Big Something fan base.  As documented here at Homegrown, and in other arenas as well, Big Something has ridden a wave of increased interest over the past year.  After changing their name and releasing "Stories from the Middle of Nowhere," Big Something's travel schedule has blossomed, as has the size of the crowds at their shows.  With a sound that bridges the gap between "rock," "soul," and "jam," Big Something presents a varied, yet accessible palate with their songs.  The album has proven to be a discovery for some of my friends who are not so heavily entrenched in the world of live "jam" music.  The result of all this can be seen in the attendance of their shows, with "sell outs" becoming the norm, when other bands are thankful to have 20 people in attendance.  This was definitely the case on this Friday night, as the Big Something nation showed up in mass to support their favorite band.

Big Something opens with "Dub Synth" which merges into the likable "Pinky Goes to Jail."  I am curious to hear how the new PA sounds, and the results prove to be excellent.   Big Something features a layered sound, where smoldering guitar meshes with ethereal saxophone and playful lyrics.  These qualities are nicely displayed in the early stages of the set, and Casey Cranford's saxophone provides a sophisticated edge.  The band plays several inspired selections, including "The Undertow" and "Illuminated," before inviting Greensboro's Marcus Horth to the stage.

Horth, who serves as one of the front men of Greeensboro's, The Mantras, brings his crunchy, metal-inspired riffs to light on "The Glow" and on a cover of "Sledgehammer," which was a "1st time played" for the band.  "Sledgehammer" closes with a dash of guitar bravado, as Horth and Jesse Hensley (Big Something's lead guitarist) lay down feverish, alternating riffs.   I notice Nick MacDaniels (vocals / guitar) smiling and shaking his head as these two guitarists work their magic on the fret board.  After Marcus rejoined the crowd, the band coalesces with excellent renditions of "Pinky's Ride," "My Volcano," and "A Simple Vision."  They close their set properly with "Vibrations All Around," which prompts the crowd to sing along with enthusiasm.  After being cajoled for an encore, the band offers up a choice version of "Amanda Lynn" to finish their set.

In reviewing the night, I enjoyed my "return" to the Blind Tiger.  As a Greensboro resident for over 20 years, I have had a lot of choice memories happen within the dingy, beat down Blind Tiger of yore.  I worried that the joint might lose some of its charm, once pushed into posh, new environs.  I can happily say that the new Tiger possesses enough charm and ambiance to match the old, if given the time to flourish and develop.  The new Tiger will bring in bigger acts than the Tiger of old could, so this could prove beneficial to Greensboro, if residents support the venue by attending shows.  In the time since the Big Something show, I've seen two additional shows there, and both were marked by excellent attendance.  I hope that continues to be the case, so that bands like Big Something (and others) continue to view Greensboro as an attractive place to play, and garner new fans.  Big Something certainly did their part on one night in early March.  Now it's up to Greensboro.