When I heard that two of my favorite bands Big Something, and Big Daddy Love were collaborating to play a few dates together, and have a super jam- I had to go.

I left VA. for a long drive to Raleigh NC. on Friday April 4. The weather was finally nice, and Saturday nights show at The Lincoln Theatre was my cure for cabin fever. I have been following both these bands since their inception, and emphatically endorse and support them both. BIG Something's high energy and catchy lyrics always make for a ruckus show! Big Daddy Love also has a special place in my heart, their enduring songs replay over and over in my mind. My new catch phrase is "Needs More Banjo"!

I got there early, and The Lincoln Theatre quickly filled to capacity. Seeing friends I haven't seen since last year also helped to build my enthusiasm. Big Daddy Love kicked off the night with their set. This 5 piece group from Winston- Salem NC. won the 2010 Under The Radar contest held by Floydfest. As always, they were on point, their Appalachian Rock had us swaying to the beat, and Matteo Recchio on electric guitar was eargasmically sublime! Ashley Sutton, BDL's charismatic bass player,  barefooted as usual, kept the energy high, and had us jumping around. Scott Moss on vocals, acoustic guitar, and bongos has slipped effortlessly into the front man position, after replacing original front man Dan Smith. Scott has a voice with a rich tone, and a soulful undertone. The quietest (socially) member of BDL, Brian Swenk on banjo, has always been my favorite! He is very modest, yet his banjo skills are second to none!!! From BDL originals like Let It Grow, to aggressive cover songs like Aerosmith, Swenk steals the show! We whooped, hollered, and danced like no one was watching, the beat being oscillated by drummer Scotty Lewis. Their set ended, and we were hungry for much more.

BIG Something is an alternative rock, funk, radio friendly sextet from Burlington, NC. Comprised of some of the most talented musicians in America. Joshua Kagel is their secret weapon, he caresses the keyboards like a musical masseuse, as well as throwing down on trumpet, and we occasionally get to hear him sing! Douglas Marshall is the quiet, cool bassist with badass beats, and a coy smile; lovingly dubbed "the Beibs". Ben Vinograd is a high energy drummer with the stamina of superman. Jesse Hensley always amazes while making face melting guitar look easy. Nick MacDaniels is an insanely sick left handed guitarist, great singer, and all around energetic, and magnetic front man. Casey Cranford on saxophone is the magic spice of BIG Something, and my nickname for him is the "living legend". I have known him for many years- since he was in school, and I have seen bands fight over him, as he was once in 3 bands at once. BIG Something is a perfect fit for such a young, inspiring sax man, and he has his own following. BS has certainly gathered a huge fan following quickly, and their boisterous, energetic shows always please.

The venue was full, and crackling with electricity as we awaited the second set, BIG Something. Great friends, and the most audacious and addicted fans were all around me, we all clustered at the front of the rail. The thing about BIG Something is, if you have never seen them, you may be overwhelmed by their most fanatical fans at the rail. Lee Crumpton danced behind us, and their biggest fan Daniel Misuraca and I side by side, in cahoots as always, are a mainstay of my BIG Something experience...

BIG Something always brings the fire, and have never left me wanting! They kicked off their set with Sirens> In The Middle. Not only were all of us fans grinning ear to ear, BIG Something could not stop smiling either. They went into one of my favorite newer songs Love Generator, and I sang and rejoiced, always feeling the love we all generate for each other! We were all caught up in the intense whirlwind that is BIG Something, and to an outsider looking in, we would have appeared to in the throes of anarchy. A Simple Vision followed to give us a moment to catch our breath, before we again became crazed by Megalodon. Jesse Hensley on guitar is masterful and fun, and my nick name for him is Undercover. Anyone not knowing him would never know what an outrageously badass guitarist he is! He kept his rock face on all night, and amazed us into Track One!

When you go to a BIG Something show, be prepared for crowd participation. I can't help but sing their songs word for word, and apparently neither can anyone else!! The Undertow reverberated every molecule in the theatre, as BIG Something's charming and talented front man Nick MacDaniels voice was actually smothered by hundreds of ecclesiastic "choir" members. Captain D reminded us how to party, and Pinky's Ride satiated our love for old BIG Something classics. Once again the choir sang along with BS to Creep by Radiohead, increasing our ardor for all things BIG. Their set closed out with another of my favorites Illuminated> The Curse Of Julia Brown, and it was truly climactic, with the energy level now broadcasting into the next universe!

Finally, the 3rd set we had all been waiting for. The collaboration of BIG Daddy Something, all 11 members of both bands took the stage. The crowd was frenzied by this point. We were sharks who had smelled the musical blood, and we were ready to be fed. It started out slowly, with a beautiful version of Take Me To The River, by Al Green. Moved gracefully into Big Daddy Love's Nashville Flood which brought out the country in us all. Then, as if having a premonition, BIG Daddy Something  wailed BIG Something's Hangover. My heart leaped out of my chest, as BDS played perfection into The Allman Brothers: In Memory Of Elizabeth Reed. Even now just writing this, I have chills. It was truly magical, and I got caught up in an astral journey of musical pleasure. 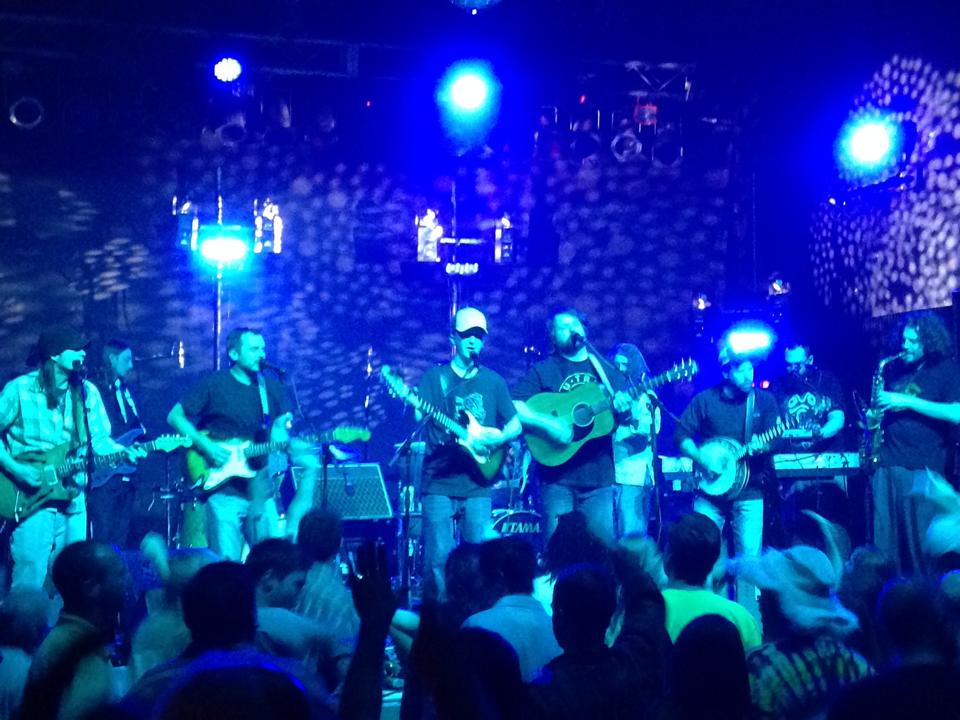 Every single song of BIG Daddy Something's set was not just sung by all, it was yelled! It was the most fun I've ever had at a concert, and that is saying something, as I have been attending concerts for 30 years! There were some shenanigans, and an unspoken kinship felt for one another. Like we all know the secret to life. BDS went into Big Daddy Love's "More Than You Deserve", and I did almost feel unworthy to experience such a cataclysmic yet organic collaboration of musical rapture. We got even more excited when BDS started playing Aerosmith's Sweet Emotion> BIG Something's Amanda Lynn. The entire venue actually sang both of these songs in key, and it sounded great to hear so many people in joyous union! They then played Spanish Moon by Little Feat in epic fashion, which got my eyes tearing a little, and left the stage. The crowd went berserk, bellowing for an encore. Big Daddy Something came back out and played the cherry on top of our BDS cake, One Way Out by The Allman Brothers! The two bass brothers kept an enigmatic twin heartbeat, as 4 guitarists hovered along the chords- dipping in and out- one after the other like a small swarm of wasps! Beautifully and efficiently the 4 guitarists built one another up, without stepping on each others melodic toes, it truly was fascinating and entertaining to witness. Josh on keys gave it the "Greg Allman" flavor- as sweet as honey butter. Ben & Scotty both herculean on drums, were giving me STS9 flashbacks! And Casey Cranford on the sax complimented the southern rock performance like 130 proof raspberry moonshine compliments an Appalachian river.

Big Daddy Something is my new addiction. BDS was such outrageous fun, I like to say their set was eargasms covered in awesome sauce. My cheeks hurt for a day and a half from all my incessant smiling! This is what good old fashioned Home Grown Music does for you. <3 It fills you with limitless possibility, and envelopes you in love as you rejoice music with kindred spirits. Big Daddy Something is palpable, taking on a Siamese twin life of their own. Each unique in their own fraternal way, yet moving in unison musically like yin and yang. I simply can not wait to see Big Daddy Love, BIG Something, and BIG Daddy Something again this June. The love we generate we also celebrate, each year at Big Something's festival, The Big What? June 26- 28 in Mebane, NC on a gorgeous, sprawling 200 acre private farm. I've been to this new venue many times, and love it! It's wooded, has a permanent stage, showers, and soon real potty's for Women!!! I invite you all to experience BIG Daddy Something for yourself, and catch the fever!

Listen to the the show!  Links below. Many thanks to the tapers!