The first ever Loki Festival dawned on the scenic Deerfields Camp Grounds of Asheville, NC to ideal weather and colorful hints of autumn along the forest skyline. For a start up Loki’s musical line-up boasted one of the heftiest funk forecasts all season and the colorfully adorned campers in attendance seemed antsy to groove. With funk heavy weights like Lettuce, Porter Batiste and Stoltz (PBS), and George Clinton on board, there was undeniable sense of boogie in step. 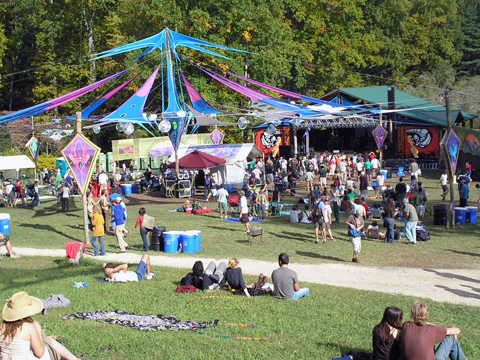 Deerfields has been host to several seminal gatherings over the past few years, favored for the plush, unspoiled surroundings and it's intimacy with the musical experience. The 940-acre wooded stretch boasts a no car-camping policy to protect the natural feel of the landscape. The festival's web site touted that only 4,500 tickets would be available but at the check in tent they were offering 3 for the cost of 2 incentives. The openly spaced campground area and thin stage front crowds made the attendance seem sparse. Post-festival the promoters were unavailable for questioning to verify an actual head count.

When Loki Productions unveiled the punchy alt-rockers Cake as the mystery headliner, the band's quirky pop sound seemed obtuse amongst a funk heavy roster. A week out from the festivities Cake, according to promoter Jack Ballard, had mysteriously 'bowed out' due to awry personal and business matters. Cake's manager Tommy Manzi clarified the allegations on a pre-festival phone call declaring that, "(Ballard) unilaterally cancelled Cake at the last minute, not the other way around. Cake is extremely disappointed to not be playing Loki. This is absolutely an issue of poor festival politics and not a band issue." Loki promised another mystery headliner to replace the vacant slot, however the "new" mystery headliner played a mystery set on a mystery stage while on the main stage New Orleans funk rockers Bonerama moved up an hour.

Just after dark, The Roots, who are widely regarded for their crowd pleasing festival sets donned the stage and delivered a nasty hour and a half, whipping up a frenzy on a hard version of Hendrix's 'Machine Gun' and wrapping up with a roaring 'The Seed 2.0'. The crowd was ripe for musical picking, the weather was right and there was a steady buzz humming through the campgrounds for the night ahead. 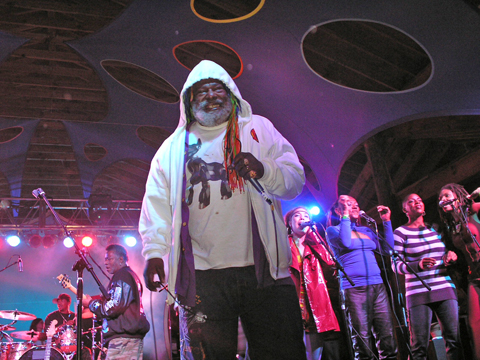 The headline on Friday was powered by big funk start up operation The Big Ol' Nasty Getdown. The B.O.N.G. project was birthed in early '08 when John Paul Miller and Derrick Johnson of Yo Mama's Big Fat Booty Band fame and John Heintz recruited an all-star funk cast including veteran funkster George Clinton. Less than a year later the colorful entourage took the stage for their inaugural gig featuring the faces of members of P-Funk, the Lee Boys, the Booty band and Laura Reed and Deep Pocket. The crowd reactions to the music was varied as many people expected a another Parliament incarnation but those who did their homework knew that this was a slice of funk history on stage.

Lettuce shredded heads on the late night main stage. The power funk mash-up took to Blast Off! A little cold like out of the fridge or perhaps they hadn't seen much rehearsal time in the weeks before, probably due to the band member's multi-project engagements. The rhythm section missed the intro on Sam Huff's 'Flying Raging Machine' but by the first 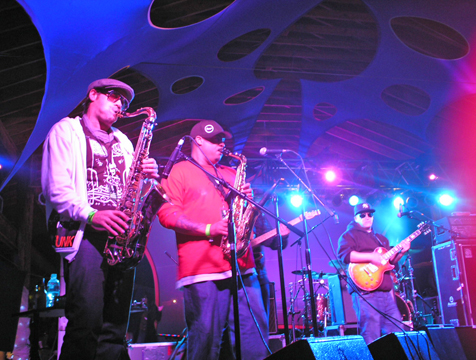 bridge started dicing up chunky freshness over starved ear holes. The backline is punchy to the behind via Adam Deitch's skin mastery along with bass monster Erick Coomes who combine with 2 tasty guitars, flavorful horn-powered melodies and a saucy set of keys complete the mixture to make a funky music salad that tosses itself.

Light winds dusted brightly burnt leaves from trees above as the Hackensaw Boys brought the match and spark for a fiery honky-tonk on the Hillside Stage Saturday afternoon. Fairies, freaks, ghouls and goons alike danced on the lush grass in front of the stage as the Hack Boys brought the best of their barrel of finger pickin' heal kickin' goodness to the assembly.  The Boys only played for little over an hour not nearly enough for fans that haven't had the opportunity to see them much over the summer. Whether or not you're a fan of blue grass you can appreciate the Hack Boys ole boy appeal, their hands-on approach to heart felt song composition, vocal harmonies and their tight as a knot playing.

Saturday afternoon's music took an hour break in preparation for the costume contest. The festival decor had a feel of grandeur with multi-colored floating webs above.  Autumn hued atmosphere lighting and lasers rounded out the setting as face melted heads filed in elaborate costume. People weren't afraid to make it as weird as it needed to be fun. Bizarre objects attached to long sticks and thrust into the air were popular as were glow stick accessories.  Back stage there were tasty accommodations and Sweetwater 420 beers available for free. There were a slew of people wearing lanyards of one type or another so by late night the beers were tapped but they had Red Bulls and waters to quench cottonmouths. 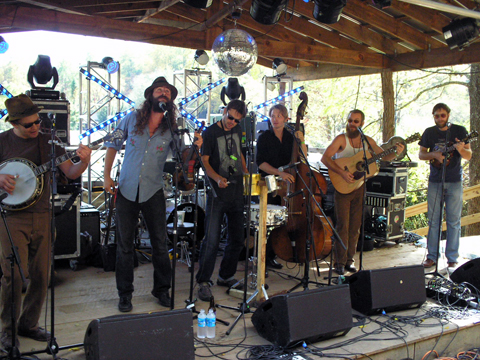 PBS shook booties in a prime afternoon slot. George Porter even took a minute to vocally appreciate the lavish surroundings between songs. The trio coated toasted heads with heavy jam on All We Want To Do Is Get Funky For You and followed up with Like a Rolling Stone that was more like a funky campfire sing-along.

The Peruvian Pedicurists was a first time festival mash-up featuring Col. Bruce Hampton (Aquarium Rescue Unit), George Porter, Brian Stoltz , Tim Reynolds and Robert Walter among others. All heads present were getting familiar with the boogie early on as the Pedicurists keep the stage hot with horn driven jazz accents over a multi-textured back groove the entire set.

The sun waned low and the dark tarpaulin of night stretched across the canopy as Toubab Krewe seemed to slide into form in front of a packed audience. The mood was festive although most looked as though they hadn't slept. There was one guy with his brain twisted wearing massive bell-bottoms and a swirly disco shirt, writing notes on a pad in the dark. That was author and I could barely see but I'd never seen Toubab in an open-air environment and the music was killing it so I just danced along with the faceless in full-blown party mode.

Trance-jam outfit Sci-Fi ran late night music. On the hill behind the campground, where at Trinumeral there had been a tent stage, there was a place called Area 51 where they had a small light show and featured a DJ whose name I never figured out. Costumed oddities were getting down, socializing on futuristic looking furniture; one guy had a Volcano with an exotic, potent strain of whatever going around. Glow sticks were the norm for seeing in the dark in the wooded camping areas.

Sunday morning came too early but the itinerary had solid talent lined up all day. People didn't seem to be packing out as is usually the case on Sunday festivals- in fact most were getting cozy stage side. With the likes of Toots and the Maytals and JJ Grey and Mofro rounding out, it was difficult to depart early.  Donna Jean's sultry swagger drew a good turn out of young and old. The die-hard festies always find that extra something to hoop up a storm at any time day or night. 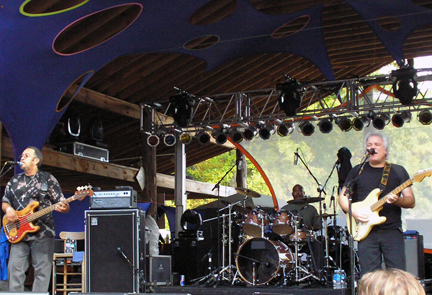 The highlight of the afternoon would take the form of the Everyone Orchestra led by Matt Butler. The Orchestra has many talented faces depending on where you see them but this particular incarnation featured Papa Mali on the six string, the duel drumming of John Fishman and Jonathan Scales with the Barrel House Mamas on vocals. Children and adults still in festive dress were dancing and everyone seemed pleased at the sounds and vibes coming from the stage.

In all Loki came off on the right foot bringing a solid line up which seemed almost like they were dropping the funk gauntlet. Many times throughout the weekend it felt as though there was a full-blown funk revival in progress and with that said let's hope for another Loki next year.