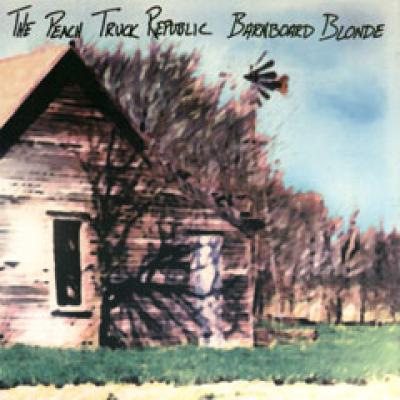 Texas has been given a bad rap lately because of its affiliation with our current administration. I’m not going to insult the reader’s intelligence. If you’re looking at this on HGMN and you’re reading an article by this author, we probably share the same political bent. Even it we don’t, we should share the same passion towards the new CD by the outfit from Texas known as The Peach Truck Republic.
I always wanted a house with a porch in the middle of a little country town where a mile away you could walk to a little bar that had kick-ass music on any night of the week--homegrown, gritty, bourbon-laced sweet rock-n-soul sounds.

I never thought I'd get it shipped to me in the mail.
Barnboard Blonde, the latest release from the progressive-folk blues band, takes me to an imaginary time and place that still exists if you allow yourself a good hour or two to let the Texas rain wash down over your jaded head.

Blonde opens innocently enough with Handsome Johnny. If you were at a bar or a club or any venue, you'd look up from your beer and smile. OK. Alrighty. These guys have it goin' on--nothing out of the ordinary. Things change as they always do...slowly, smoothly...Come What May with founding member Eddie Hord on lead guitar and vocals, Lilly of the Valley and Sleeping Beauty, Dismuke, Cook, Jewell, O'Jones move through the audio portrait...the songs make you put down the beer and take another notice.

Sleeping Beauty is Southern Trey and Jen Hartswick as a ballad singing duo brought up a notch with a huge heaping of goose bump pathos. Drums soft and brisk. Piano gracefully plays along with the tune. Bass is pushing the vibe quietly in the dusty, low lit part of the room.

If you don't think a progressive-folk blues band can jam, check out Laurel and Oleander. You know that part of the Allman Brother's Dreams where the band has eased your head back and you never want the song to end: a frozen moment? I've seen ABB do that song so many times in concert and it's always rich and full. Laurel and Oleander is like a jam session at two in the morning where the Dreams theme is extended to a high plateau that looks out over that frozen moment.

If you don't think a bunch of long hairs from nowhere can make you rattle and shake, check out Tried and True and Higher Ground. Hallelujah Fly Away brings the goose bumps racing back as your warm beer sits without any friends on the table you deserted while you were kicking up the dirt. I live for shit like this and, damnit, if I don't find it in the mammoth landscape of the tumbleweed-pocked beaut known as Texas.

Pretty soon you're not where the car took you--you're somewhere else, some moment when everything is working well and there's not a single bummer on the horizon. Odd. A billion years ago a friend told me, "art is giving someone an experience they wouldn't normally have." I suppose in Barnboard Blonde's case, art is placing you in a surreal southern womb where the only sounds you hear are echoes from some era that never died, that never grows old, that stands jam music on its head. Don't believe me? Listen to a live take of Dreams and then listen to Laurel and Oleander...brothers from different states, but brothers, nonetheless.

I can't stress this enough: Barnboard Blonde--she needs to be experienced in its entirety--for want of a better phrase: don't skip the damn foreplay. No 21st Century iPOD shuffle play for this blend--she needs to be heard from Tracks 1 through 12 to grab the whole effect. Best buzz I've had since...man, this morning. There is so much good music on the scene right now that it would be foolish to stick to the coasts for your fix. The Peach Truck Republic reminds everyone that sometimes things aren't what they seem. This is outlaw music. It is truly up to you to change your environment. Sounds trite and old-fashioned, but if you don't care about what's going on around you, no one else will care about you. This music is a triumph of the outlaw over the whim of justice.

If you want to go way back to 1975, Willie Nelson put out Red-Headed Stranger, a breath of fresh air that kicked country, folk and rock music up the backside. Unfortunately, Nelson was way ahead of his time. America didn't catch up with him until the mid-90s. The idea of a concept album of outlaw music? The Peach Truck Republic carries that torch of Texan transcendence that seems to bypass our man George W. That's another story...another time...get this music and sit in that old chair on your apartment balcony, your garage, your back porch, and light up, drink up...do whatever you have to do to get in the mood. Me? I'm still grieving for my dad who died last year. Hell, I'm still upset about my fallen literary hero, Hunter S. Thompson. The Truck bridges every generation gap I can imagine. My dad died last year. He grew up in Texas in the 1930s and 40s and we used to talk about music amongst many other things. My dad would have loved this sweet stuff as much as he liked to take huge, long drags from his cigars. Skin Deep and Just As I Am would have curled his graying hair into dreads. I think I'll pour a little of that Kentucky Bourbon Whiskey called Fighting Cock and toast my dad and HST. Texas never tasted so good. Take a taste yourself. 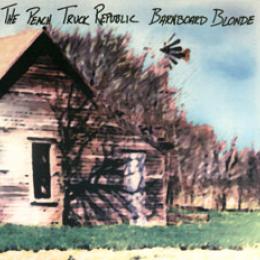