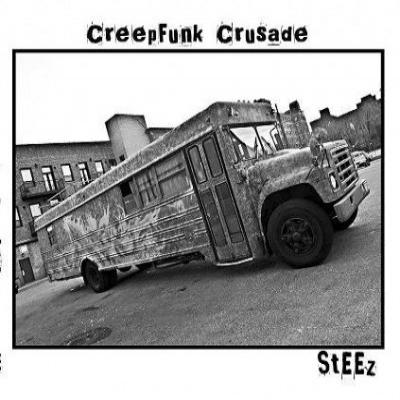 Steez presents a muscular, energetic blend of funk, jam, and groove with “Creepfunk Crusade.”
Steez, an energetic quintet from Madison, Wisconsin has played together for 6 years.  After garnering a loyal following, releasing "Creepfunk Crusade," and touring across the Midwest and East Coast in 2009, the band is poised for a breakout.  The swampy, cosmic soup of "Creepfunk Crusade" begins with "Trouser Snakes."  This song morphs from its swarthy funk foundation into a stratospheric guitar solo that coalesces nicely with contributions from horns and keys.  The song changes directions throughout the body of the song, culminating in a dramatic, almost cinematic-feeling jam.  "Rufia" begins with exploratory guitar before coalescing into a nice, percussive groove.  This track is punctuated by Benkowski's energetic saxophone and Williams' rollicking keyboard.  The later measures of the song offer room for one of Steve Neary's muscular guitar workouts before the band offers whimsical lyrics about a "Rufie"-dispensing groupie.  Despite the rather comic overtones of the lyrics, there is a sonic quality here that reminds me of the best Pink Floyd.  "Scoring Position" begins with playful musical interchanges and settles into a lengthy, majestic jam where bass, keys, guitar, and horns share the spotlight.  "Saz" gallops into prominence and changes directions frequently, offering several nice moments for the lover of keyboard and guitar.  This song blends seamlessly into "Boss Theme," which blends into "Duderfunk," offering an excellent combination of funk grooves and lilting keyboard along the way.

"TKO" begins listlessly and loose-spirited, but ramps up its intensity amidst the backdrop of swirling keyboards.  The lyrics depict a thug who wants to "punch your lights out to satisfy his soul" and features a lengthy exploratory jam.  "Electric Mister Boston" is a bouncy, energetic number that features danceable grooves, wailing guitar, and a variety of tones and directions.  The song changes moods and tempos frequently, an attribute that can be applied to the album as a whole.  "Hot n' Sweaty" features Kenny Leiser on violin with its ironic portrayal of the "heady dready" festival scene.  The album ends with the "So I Guess I'll C Ya" (Parts 1 and 2) and these tracks have that same cinematic quality that I have attributed to other tracks on the album.  "Part 2" changes tempo into an exciting, forward moving jam featuring precise guitar, lilting keyboard, and a light-hearted, inspiring tone.

In reviewing this album as a whole, I am impressed by the band's musical chops.  The tracks on this album are light-hearted, satisfying, and feature dazzling interplay between guitar, keyboards, horns, vocals, and percussion.  The tracks on this album entice me to see Steez "live," as these songs feel dramatic, yet fun, and like they would definitely translate well into a live performance.  Steez's "Creepfunk Crusade" is the culmination of 6 years working together, and the results are excellent.  Although I was originally unaware of Steez, this album definitely puts them on my radar, and I hope to catch them here in the Southeast sometime soon. 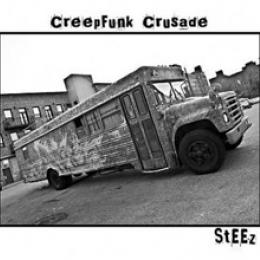