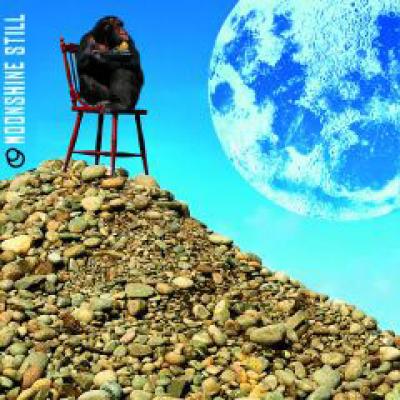 (R)evolution is the second studio album from Macon, GA’s Moonshine Still, an affable rock sextet with a serious penchant for percussive, free-flowing jams. The band’s name might be a little confusing for some, as it oozes a country/acoustic feel. However this new album proves that Moonshine Still is not limited to any specific genre, as the band presents Scott Baston’s indescribable vocals among a cavalcade of changing musical moods.
Recorded at legendary Tree Sound Studios in Atlanta, GA, it's clear that the studio became a conduit for some amazing ideas. I'm no huge Moonshine Still fan, but this record is not what I expected to hear. In that alone, they accomplished something, shattering at least one person's expectations. This is not a southern jam-rock record, but a clearly thought-out collection of concepts executed with brilliant results and sound quality.

The album begins with a thudding kick drum and a joyful melody on "Warming Up," which features extra percussion from Count M'butu, and the raunchy guitar riffs of "Mr. Munson," which turns into a gliding improvisation with beats and effects of an almost techno nature. Instantly, the band shifts the tempo back to a rocking Rasta-flavored backdrop before drawing to a quirky close. More thick reggae influences dominate "The Jury," a slow-burning piece that features a gradually building vocal section that is simply dreamlike.

The band shows some southern roots with a soulful gospel intro on "Stackin' Stones," which fuses modern electronic sounds with simple, proclamatory lyrics that succeed at bringing the feel of a church choir to the song. "Weapons Or Words" is another clear example of the band's unmistakable world-weary lyrics and soothing music. Mark Van Allen's pedal steel graces three songs on (R)evolution, but its effectiveness is maximized on this heartfelt ode to personal perseverance.

The soaring vocal harmonies on "Portrait" sweep over a bed of music that is comprised of so many varying influences, it's nearly impossible to separate them. Textural piano lines link with a drum-and-percussion mesh that is at once modern and strangely island-influenced. "Test Baboon Part 1" is a gentle fantasy filled with clouds of piano and showers of harmonious vocal work. It's possible to get completely absorbed by Moonshine Still's accomplishment here, as "Barely Alive" boogies along, and the listener becomes immersed in this album's world of hope, loss, fear, and longing.

The foreboding "Ghoulson's Ghost" seems to be a heavy metal overture trapped in the body of a space-rock vampire, as the grandeur of dual guitars and daring, dramatic piano creates a landscape of sadness and desperation. "Labrea" is a neck-breaking funk dinosaur, all chicky-chick guitars and splashy sounding keyboards over a tidal groove. The band never lays off the heavy subject matter, even during the loose musical moments; "Labrea" has some serious human issues to deal with underneath the danceable exterior. Even the skanked-up strut of "Major/Minor" holds an unknown message: "Gather round the table for a holiday and feed yourself upon the dreams that you choose." Something is going on, although I'm not sure what.

"This Fall" is a lengthy tune that starts with a pummeling bassline and unleashes an army of dueling guitar sounds. The battle rages for over 5 minutes, through numerous crashing climaxes, before concluding in an explosive fashion. Spinning in a completely different direction, the band moves into "Sad Girl," a poppy, sing-songy tale of a girl and a boy with a dastardly, noisy ending. This is a far cry from the weighty explorations that comprise most of the disc, but a welcome respite and a good way to start bringing the disc to a conclusion.

"Test Baboon Part 2," which brings the album to a soothing close, is a continuation from earlier in the album that expands further on the theme of the album's title. With ruminations on civilization, moon-circling-baboons, Charles Lindbergh, life's struggles, ghosts, and more abstract concepts, Moonshine Still proves that evolution, particularly their own, is still happening.