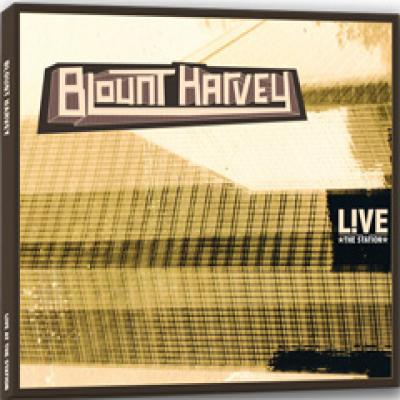 Blount Harvey delivers an infectious mix of hip-hop, rhythm and blues, and soul in this skillfully executed “live” recording from 2007.
Blount Harvey hails from Greenville, NC (coincidentally where HGMN was founded)  and fuses hip hop sensibilities with well-delivered funk, jazz, and rock rhythms.  "Live at the Station" documents a well executed live show that serves up nine tracks of engaging, intelligent hip-hop. In a press release from May 19, 2009, the band quotes "Erykah Badu, James Brown, Tribe Called Quest, and KRS-One" as a list of influences.  That would also be lofty company to strive for, but there is a definite charm to this recording that legitimizes the comparison.  The band delivers tight, polished arrangements that are warm and well-produced, while MC Rudolph Lyrics contributes excellent rhymes and vocals to the mix.  The current lineup of the band has shifted and morphed since this recording from 2007, so I will be curious to see what happens with future releases, but this album has definitely garnered my interest in the meantime.

The album begins with "Crunktrain," featuring Rudolph Lyrics' infectious vocal delivery, Jonathan Caison's trumpet work, and the smooth, refined grooves that pervade this song and the album in general.  "It's Love" introduces the soulful Lady Bri on vocals, as she is pitted against sparse accompaniment from MadShah and his slinky organ skills.  The song picks up steam on the strength of energetic horns as they playfully dance around Lady Bri's vocals.  Rudolph Lyrics contributes one of his smooth vocal passages, as crystalline, searching trumpet punctuates the middle movements of the song.  "The Flow" spotlights Rudolph Lyrics on vocals, while JohnBeez' turntables and Lady Bri's vocals complement the airy light-hearted groove of the song.  Ben Sparrow contributes excellent saxophone work to close the song.  The "Hot Shit (Marvin Remix)" is playful and energetic, with Lyrics delivering the charming vocals and energetic rhymes that are present on the best moments of this album.

"Interlude" begins with a relaxed, yet sophisticated groove, as Rudolph Lyrics' rhymes are splashed with playful turntable and horns.  This brief track segues into "After All," which spotlights polished horn play and Rudolph Lyrics' signature rhyming skills.  Wistful trombone punctuates the latter stages of this song, as the band delivers a loose, jazz-based jam spiced with turntables and the applause of an approving crowd.  "Something in the Drum" begins on the strength of MadShah's organ skills, eventually lending the stage to Lyrics, before MadShah reclaims prominence in the middle of the song.  As with the majority of the tracks on this live recording, there is warm, polished quality to this track, with an intimacy that sounds as if the band is in your living room.  The album closes with "Tighten Up," and the title is definitely representative of the tone of this song.  Precise, mathematical grooves yield to loosely-arranged passages, followed with Lyrics' syncopated delivery.  Blount Harvey shifts such gears frequently throughout this song, and it demonstrates the different "hats" that this band wears in its live performances.  An unlisted "bonus track" captures a few moments of Lady Bri and her band mates in a loose, seemingly unscripted jam.

"Live at the Station" demonstrates Blount Harvey to be an enthusiastic group of musicians with a warm, contagious sound.  The tracks on this live recording can be quite fresh and exciting, as the fusion of freestyle rap, turntables, and jazz sensibilities often proves to be quite fertile in these songs.  There is a definite charisma present in the rhymes of MC Rudolph Lyrics, as his energetic voice and delivery culminate in many of the best moments of the album.  The other members of the band offer excellent contributions with their playing, and the resulting mix of horns, guitar, and keys (both organ and Rhodes) are quite seductive in various parts of this album.  I had not been aware of Blount Harvey until hearing this recording, but the tracks presented on "Live at the Station" definitely have me interested in their "live" performance capabilities.  Word is the shows are even better now that they have a new dynamo female lead singer, TyKee. Any band that features such a big "live" sound, with great grooves and intricate arrangements should prove to be entertaining, and the tracks on this album are exciting testament to that. 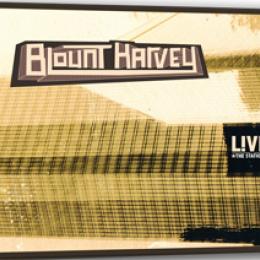