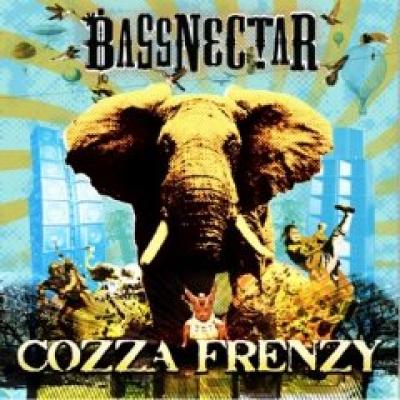 Bassnectar dishes out a potent blend of drums, bass, and electricity, tickling your eardrums into submission.
Bassnectar features driving beats and sonic exploration, representing the mad scientific genius of Lorin Ashton.  Ashton combines "trip hop," trance, electric fuzz and all manner of other influences to create the wonderful tracks on this album.  A more learned musical historian might classify the various musical passages better than I can, so I'll leave those assessments to them.  In the meantime, I'll offer the observation that the tracks on this album are fun, sonically daring, and full of auditory fireworks.  The brilliance of "Cozza Frenzy" begins on the merits of the absurdly addictive "Boombox."  Featuring driving beats and sonic fireworks, this track is a charming, habit-forming introduction.  This song, with its musical undulations and warped amphetamine sensibility, is my "guilty pleasure" track of 2009.  I often roll through campus, windows down and stereo "juiced," listening to this track.  The title track is featured next, with two different interpretations of "Cozza Frenzy."  The original track is followed by the "Mega Bass Remix" and these two sonic deviations complement each other nicely.  I particularly enjoy "The Churn of the Century," which begins with layered gramophone like effects before a throbbing bass line pulses its way into existence.  This track is frantic and might inspire a visit to the chiropractor if one rages too hard, as it veers from brain-munching measure to measure.

Ashton remixes "Love Here" (originally by Mr. Projector) and takes the song to compelling heights.  The haunting voice at the core of the songs meshes nicely with the urgency and frantic nature of Ashton's beats, resulting in a layered, interesting track.  The album features several nice remixes and Fever Ray's "When I Grow Up" is particularly alluring, even haunting.  The song features otherworldly lyrics and vocal contributions by Azeem, whose exotic voice frames the song nicely.  The down tempo "I Am A Laser" is full of reverberating ambient effects and is a track that I am particularly fond of.  Childish laughter frames the perimeter of "Window Seat" and Ashton maneuvers deftly through myriad textures and moods.  "Are You Ready" is a warped spaceship to another psychotic dimension, adding a chaotic flourish.  Ashton closes the album with the Ill Gates remix of "Boombox," ending the album where it started, but with a decidedly different twist.

Of course, liking an album is a matter of taste, relative to each listener and dependent on their own sets of likes, dislikes, and acquired loves.  I am exposed to tons of great music through my association with Home Grown, but this album has vaulted to the top of my rotation.  I kept hearing about Bassnectar, but I had never heard Ashton's work.  I asked to review this album, wanting to hear what all the noise was about, and I found the album to be charming and addictive.  I have turned the album on to lots of folks just by playing it constantly myself.  After spending the last two weeks engrossed in "Cozza Frenzy," I can see the allure of Bassnectar.  This album has a special quality that could endear Lorin Ashton and his talents to the greater world.  I will be adding more of his work to my collection, thrilled with the discovery.