HGMN: Who are your greatest musical influences?

NICK: As a guitarist, I'd have to say my biggest influences are Jimmy Page, Eric Clapton, and Jimi Hendrix- sort of the Holy Trinity of rock guitar. As a musician though, I have a lot of influences that maybe don't inform how I play my instrument as much as how I look at music and performing. Its kind of an eclectic group, from Otis Redding to David Byrne, and from Elvis Presley to Eddie Vedder. I'm really interested in musicians who can do something that's completely their own- even if they play a simple blues tune; they still make it their own.

HGMN: If you could see any musician that has since passed away, live in concert for just one show, who would it be?

JOE: If I could pick any concert to go to it would be John Coltrane. Hearing him on record has always blew my mind, and i imagine hearing him live would have been quite an experience.

GERARD: Definitely Stevie Ray Vaughan. To listen to Stevie is one thing, but to see him live is a whole different story. I have some video footage of him and it just blows my mind every time I watch it. It's just more than playing. You could see his joy and all his struggles come through the music. He plays so effortlessly too. It's like he's hearing the music from a higher power.
NICK: I'd love to see Jimi Hendrix, and to see him play a show up close. When he was 'on', the man was like a lightning rod for inspiration and creativity. Even the way he moved onstage was just pure passion and music

HGMN: If you had never taken an interest in music, what do you think you would be doing with your life?

ED: Running my own business.

JOE: If i wasnt playing music i would probably be involved in some other art form. Most likely writing literature.

GERARD: That's a tough one. I guess it would have to be with some sort of the arts. Photography or painting or something.

NICK: I think I would have been playing baseball for some minor league team somewhere, or hustling the NYC art scene in an Andy Warhol kind of way. I used to love baseball, but I had a problem with the authority aspect of the team. Luckily I found a guitar. I also went to school at NYU for visual art, and I learned that a lot of the 'art world' is just an elaborate hustle. I got a bit jaded and threw more of myself into unadulterated world of the music business, which as we all know is pure and completely uncorrupted.

HGMN: This question is for Gerard...Steely Dan is one of my favorite bands and I understand they are one of your many influences. What is your favorite song and why?

GERARD: To be honest, I don't even listen to Steely Dan. That's not to say that they are not a good band. They are a great band, but I think Nick said that I was a fan and that didn't make sense to me. I honestly couldn't tell you one Steely Dan song. I dont know the title to a lot of songs. It's a bad habit I have. I just buy the cd of a band I like and throw the jewel case in my storage room. I rarely know the title to any songs.

HGMN: What do you consider the greatest rush of live performance?

JOE: The biggest rush of performance is the conversational aspect between the performer and audience. The aspect of never really knowing whats going to happen until it happens is very appealing and the audience's reaction plays a big part of it.

GERARD: Any time I was at a Phish show. They made me so happy every time I saw them live.

NICK: I think the greatest part of playing live is when you reach that point where your mind stops handling things. Sometimes it happens early in the show, sometimes it doesn't happen at all, and sometimes it may happen for part of the show or even part of a song. But when it happens, it's like your ego steps out of the way, and you're free to just play music. You stop thinking about the song, the arrangement, the audience, the light in your eyes, the guy shouting 'Freebird' and you are able to play comfortably and purely with no distraction. I think the best shows are when that happens at the same time for all five of us on stage as well as with the audience. Of course, when you're jamming, and you realize you've reached that point with the music, you inevitably ruin it because you've started thinking again!

HGMN: What is your favorite venue to play?

JOE: My favorite place to play is Mexicali Blues. They give us the space and time to play how we really need to play.

GERARD: Definitely Mexicali Blues in Teaneck, NJ. The room sounds great and the people that work there are the best.

NICK: I really think Mexicali Blues in NJ is one of the best venues overall that we've ever been privileged to play. The sound, the atmosphere, the lighting, the setup of the room itself- they are all geared toward giving the band and audience the finest experience possible. They've put a lot of time and thought into that venue, and it's reflected in the stellar performances you can catch there any night of the week. But, of course there are venues that I love to play because of the atmosphere or the vibe alone, such as The Underpass in NJ, or the Electric Company in Utica, NY.


HGMN: What is your favorite thing to do while traveling from show to show? Are there any particular places you like to stop and check out?

ED: Stop to get something to eat, sit around, BS and laugh.

JOE: Traveling is a good time to just relate to the other guys in the band. With the way things happen, we usually only see each other for rehearsals and gigs and to travel with everyone gives us a chance just to hang out.

NICK: Whenever we head to upstate NY on the NYS Thruway, I feel compelled to stop at the New Baltimore rest stop. I don't know why, but I feel like if I don't, something bad will happen. Also, I am kind of superstitious about what I call the "School House Road" phenomenon. Basically, I have noticed that whenever we play anywhere at least two hours from home, we always pass a 'School House Rd.'. Whether we go North, East, South, West, Northwest- whatever direction, I always see a sign for a School House Rd. I guess it's another weird superstition of mine, but while traveling, I enjoy looking out for the School House Rd. sign. It's a bit strange, yes.


HGMN: How long have you all been playing together?

ED: I have been in the band 3 years

JOE: I have been playing with gerard for over ten years in various forms, in fact much of my learning in the beginning came from him. I have played with mike and nick for about six years and the current group with ed has been together close to three years i imagine.

GERARD: The current line up has been together for about 2 and a half to 3 years.

NICK: This lineup of the band has been playing together about 3 years. This to me is the band, and Ive never felt more comfortable playing with any other group of musicians. Although, I have been playing with Gerard and Joey for a bit longer than that.

HGMN: What songs are you proudest of?

ED: Faster, Grateful, and The Moon will always rise

JOE: I am proudest of Moon, Hooked and Shattered, and Bread Sandwich because they each represent a structurally different arrangement than what most rock and roll has been.

GERARD: Personally my proudest songs are Pressure, Grateful and Faster. I think those songs really got down to the meaning of what I was truly feeling at the time.

NICK: I think as a band, I'm most proud of a song like 'Hooked and Shattered' which Gerard brought to the band in one form, and it kind of morphed into the tune it is now. I always feel a great sense of accomplishment when Gerard writes a tune and the whole band is able to contribute something to it that makes the song something bigger and better than what it would be otherwise. I guess it's the collaborative effort that I feel most proud of when it's successful. Of the few tunes I've ever written, I'm most proud of a song called "Ratboy". It's about a mythical being, shunned to live under the ocean, where he teaches the sea creatures to sing the music that the people on the land wouldn't bother to sing. Its pretty heavy stuff and it says something about the duality of man. It's actually about I guy I knew in college.

HGMN: What is your summer schedule like? Will you be playing any outdoor festivals?

GERARD: So far we are booked to play Strangecreek and Gathering of the Vibes this summer. I can't wait until festival season. I'm sure we will be playing more that are in the works

NICK: Our summer is shaping up to be a great time with a lot of great shows. We're looking forward to doing quite a few festivals, including some big Northeast fests like last year.


HGMN: Here's a silly question...if you had describe yourselves only as Muppets, which Muppet would each of you be?

GERARD: Wow! I guess Joey, our drummer, would be Animal for obvious reasons, Nick would be Gonzo because he's real silly all the time, Ed would be Fozzie because he's everyone's friend, and Mike would be Kermit because he's level headed about everything. I dont know who I would be. I ran out of Muppets. Who's left , Miss Piggy?

NICK: I think I can relate to Gonzo the most.

HGMN: Where did you come up with the name, Scarecrow Collection?

JOE: I dont know the origin of the band name. I will have to read wherever these answers are going in order to find out. I usually let gerard handle things like names.

GERARD: It started out because me and a buddy of mine who played harmonica, where playing folk songs all the time and every song seemed to have a scarecrow, a wheat field, or an old shack at the end of a road in it. We obviously called it Scarecrow at the time. We then found out that some sort of Sweedish death metal band from the seventies already had that name so, we decided to add the Collection at the end. Meaning a collection of music and friends. 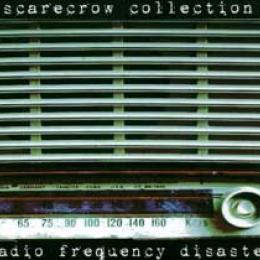