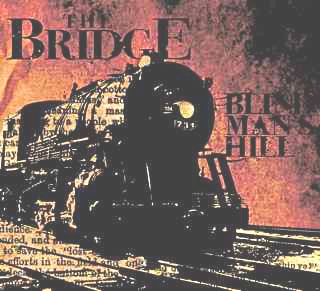 The deep-rooted songwriting and steady-rolling rhythms on Blind Man's Hill, the new release by Baltimore's The Bridge due October 21 on Hyena Records, could fittingly be compared to "the best damn rotgut liquor on the better side of county line."  One part earthy rock 'n' roll, one part funky New Orleans syncopation, and yet another part southern country soul, The Bridge write timeless songs that resonate with Americana themes of locomotives, moonshine, carnival barkers and crossroads. Principle songwriters Cris Jacobs and Kenny Liner balance each other in their respective writing styles over the album's 12 tracks. Jacobs-penned numbers like "Honey Bee," "Let Me Off This Train" and "Poison Wine" are alive with metaphors and informed by a haunted blues spirit, while Liner taps the high and lonesome with sweeping mandolin picking and the hard-earned sentiments of jams like "Born Ramblin'" "In Dreams" and "Dirtball Blues."

"These songs are basically pieces of one big American story," says lead guitarist and vocalist Cris Jacobs. "As a band we shared a vision for making an album that sounds 'just like they use to,' and I think we've captured that classic feel."

Playing upwards of 250 shows this year, including festivals like Gathering Of The Vibes, All Good, Camp Bisco and Moe Down, The Bridge have garnered a growing grassroots buzz that attracts new fans with every performance. In 2008, the band also toured Europe for the first time, while they were hand-selected by Mike Gordon to open a string of shows for him in August. Around the release of Blind Man's Hill, The Bridge will embark on a worldwide tour that runs through 2009, including album release parties in both Washington, DC at The 9:30 Club on October 17 and Baltimore, MD at Ram's Head Live on November 26. For the DC release show, The Bridge will share the night with one of their biggest musical influences, Little Feat, a symbolic combination highlighting the lineage connecting the two bands.