The people of Clean Vibes’ laborious dedication to their cause has made them permanent fixtures at festivals of all different sizes from coast to coast. 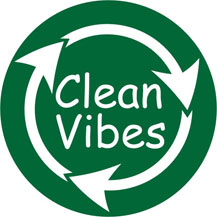 There is a place deep in the Southland where, for one weekend in June, reality melts into a dream. Traveling thousands of miles, eighty thousand people from all over the country converge on the country's largest music festival. Bonnaroo, a Creole word for really good time, is a music festival of mammoth proportions. Of the many who brave the oppressive Tennessee summer heat, there is a group whose purpose serves a higher good. All dedicated to one common goal; a happy, healthy Mother Earth.

Nine years ago, a few music fans wanted to give back to a community they loved. After years of attending music festivals and witnessing mountains of waste that rivaled Everest, the fans decided the time was felicitous to act. Their first order of business was forming a company called Clean Vibes. Seeking cooperation from the Jam Band music community, they set out making recycling, sanitation, and fan education their mission. After seasons of muculent swill and barrel tossing, quite a reputation was established. The people of Clean Vibes' laborious dedication to their cause has made them permanent fixtures at festivals of all different sizes from coast to coast. Any one of these events can range in capacity from two thousand people to a crowd the gargantuan size of Bonnaroo, around eighty thousand.

All told well over one hundred people comprise the Clean Vibes staff and each person serves a vital role in the weeks it takes to put on a festival the scope of Bonnaroo. Envision a city the size of Berkeley, California set up over a seven hundred and fifty acre spread. As early as late May, the first Clean Vibers arrive to begin the assiduous process of readying the site for thousands of attendees and the waste they will create. Like soldiers readying for battle the Clean Vibers spends ample time in preparation. Over the next few days, a massive transformation morphs a bucolic cattle farm into the Behemoth that is Bonnaroo. Over four thousand barrels are placed in strategic locations, tops are made for the recycling stations, signs are creatively concocted, and vehicles readied. By the end of the first week thirty supervisors and over ninety staff arrive to help tie everything together, and rather prodigiously in the land of Clean Vibes; every Bonnaroo starts this way.

Clean Vibes is far from an organization that just collects trash. They constantly quest for new ways to create a greener scene, and to educate fans of the importance of picking up after themselves. Another key factor Clean Vibes tries to illuminate is the impact we, as festival patrons, have on our environment. Each year Clean Vibes distributes informative signs and displays throughout the site to help convey the extent of that impact. They decorate their box trucks, pick-ups, gators, and Garbage trucks, with banners that proclaim the likes of, "Powerful People Recycle" or "Fans -R-Sweet, When They Keep it Neat." To actively engage the attendees to participate in a positive and gladdening way Clean Vibes even has their own area in Centeroo, the center of the festivities, complete with raffle booth, lounge and recycled art.  All of these logistics are planned out months in advance, but amazingly everything gets set up in just a few weeks time.

Almost immediately, like ants encountering a bounteous picnic, the Clean Vibes staff is put to work. Those whom work during the day find themselves in the midst of a pastiche of activity. Like medics in the heat of battle, the Clean Vibers can be found getting their (gloved) hands dirty all over the place. Whether they are head first in a barrel of recyclables, trying to sort out the trash, while being buffeted by incoming bottles and cans thrown by seemingly oblivious fans or trying to get a load of malodorous trash to the nearest roll off container, they are there with a smile and a determination that has no rival. All this while muddling through a heat so hot that your skin feels as though it could just deliquesce.

The night brings a semblance all its own. The air is cooler, but ripe with a sentiment of unbound titillation. As though a full moon has risen and everyone is a wolf yearning to howl with unabashed joy. With all eighty thousand fans packed into the main venue taking in the sounds of the festival headliner, you'll find a diligent crew of Clean Vibers trying to balance the trash with a few good dance moves. In the eighty acre space, as packed with people as a banquet at a Richard Simmons' seminar, the Vibers can be found wading through, trash bags in hand, changing out barrels and sorting out recycling. They can be seen dodging bodies anesthetized by sheer exhaustion from dancing ecstatically and certain euphoric indulgences, while trying to cycle through hundreds of barrels full of the most repugnant waste one could ever encounter before repeating the method again after a matter of minutes. Not uncommon is the sight of a gator, a beefed up golf cart, piled fifteen feet high with garbage, motoring its way across the venue to a roll-off trash container. Even more common is the sight of one of the crew, tossing a rogue bag onto the top of the pile, getting inundated with a fresh mist of mephitic garbage juice. After the night's headliner ends their show the entire Clean Vibes' night shift descends upon the main venue to disseminate trash bags to those willing to lend a hand and to begin a several hour long process of readying the field for the following day's activities. Meanwhile, the sonorous enterprises of late night extravaganzas can be heard in the background, keeping spirits high into the wee hours of the morning.

As the festivities wind down, after three days of good times and a healthy dose of debauchery, a new scene unfolds. As the festival attendees depart the seven hundred fifty acre spread becomes something out of a Salvador Dali painting. The surreal landscape is dotted with bags of white, black and green, as well and broken sofas, rundown tents, and a few cars to boot. The Clean Vibes staff kicks it into high gear and the monumental task of clean up is undertaken. When all is said and done, almost six hundred tons of waste will be collected and over 60% of it will be diverted from the landfill by recycling and composting.  There will be truckloads of food, shoes, and camping gear that will be donated to charity and the land will be left looking just as it did in the days before the festival.

One may wonder how someone could do what the Clean Vibers do? How do they have any fun? Truth be told, for these hard working fans it is their passion. They get the full benefit of a behind the scene look at the country's largest music festival while working to create a better, healthier environment for those who attend it. They work hard to achieve a goal of non-existence, one for which they receive little recognition. The consummation for which they strive is a Jam Band coterie that cleans up after itself, so no one else has to.

Inspired to be a part of this amazing effort?  Ready to lend a hand to keep your favorite festivals clean and get free admission or even paid in the process?  Clean Vibes is now hiring for the 2008 season!  Applications for both paid and volunteer positions can be found on their website at www.cleanvibes.com. Don't delay as paid staff applications must be submitted by March 31st.