Acoustic Syndicate, one of "North Carolina's best kept secrets" is returning this holiday season for a very special post-Thanksgiving show at the Lincoln Theater on Friday, November 27th.

Known for its high-energy, positive sound, Acoustic Syndicate delivers a genre-defying performance, masterfully blending its eclectic influences with trademark finesse that only 17 years of cohesive teamwork can bring.

Acoustic Syndicate is the product of Cleveland County's McMurry clan. Guitarist Steve "Big Daddy" McMurry is joined by his cousins, Bryon McMurry on banjo and Fitz McMurry on drums. The three McMurrys also bring a trademark vocal trio that only a lifetime of singing together can deliver.

Joining the McMurrys in 1998 on bass, Jay Sanders has become part of the family. A long time resident of Asheville, NC, his seamless blending of musical genres and driving style brought a completion to the band's sound that continues to characterize and define. When not with Acoustic Syndicate, Jay can now be seen playing with Donna The Buffalo or his own group, The E.Normus Trio.

Formed in 1992, Acoustic Syndicate has had a long and storied career. They spent well over a dozen years on the road, playing at the original Bonnaroo, MerleFest, the Telluride Bluegrass Festival, Memphis in May and many many other clubs, festivals and events.

The band had the distinct honor of being invited to perform as a part of FarmAid in 2001, a significant occasion in respect to their family's agrarian history. The McMurry family are farmers, and continue to cultivate the same land their family has for generations.

In 2005, the band decided to hang up the towel for a little while. They put their touring career on hold with a legendary five hour performance at SmileFest. In a recent interview with Frank Ruggiero from the Mountain Times in Boone, NC, Steve McMurry said "With the music industry in dire straits, the band would have had to commit to another five years of heavy touring to sustain itself. None of us really could see being gone from our families and people for that long a period of time... We had a great run of it, and thought we'd just call it quits and be regular people for a while."

But the band's audience felt otherwise. "People wouldn't let us quit playing," McMurry said. "They'd keep calling and calling, so after a couple years we decided we'd get together and see if we still knew how to play." The results speak for themselves, and McMurry said the band is now performing without the pressures touring so often brings, and rather playing for the fun of it.

In 2009, Acoustic Syndicate was honored by being voted the 6th top artist of the last 20 years by the listeners of Western North Carolina's WNCW radio station.

Their discography includes six official releases including two for Sugar Hill Records. Their 2004 effort "Terra Firma" was voted the number one album of the year by the listeners of WNCW, and 2005's "Long Way Round" placed number seven. But it is not going to end there. Acoustic Syndicate plans on cutting a new record. The band will visit the studio this winter to craft an album of all-new material.

When Ruggiero asked about the music of Acoustic Syndicate, Steve McMurry replied "It's high energy with a definite rock 'n' roll vibe, but acoustic."

"I don't like getting pigeonholed, because we do so many things - bluegrass, soul, funk - whatever feels good," McMurry said. "And the music we write is not typical of what you hear on the radio, either. We try to stay away from that mainstream cookie-cutter variety, and, honestly, I think people appreciate us doing that. I think there needs to be an alternative."

Acoustic Syndicate's all about making sure it's an honest alternative, a sound that's 100 percent its own, but steeped in a rich musical history each band member appreciates. McMurry said the band's influences span the musical gamut, including the Grateful Dead, Little Feat, The Police, The Who, Peter Gabriel, Steely Dan, John Hartford and Bill Frisell.

"I know all this stuff seems weird to be lumping in on top of a bluegrass ensemble, but it works - this is the stuff we grew up listening to," he said. "Some of the class rock 'n' roll is there, but also the more traditional music. We grew up singing in a church, and mountain music, ballads that our parents and grandparents taught us ... that comes out in there, especially with the harmonies we put together. It's a veritable melting pot of different influences."

McMurry's quick to assert, though, that the music's never been about the band, but rather for the audience.

"The material we've written has consistently had a positive message to it, and very little of it is centered toward the individual," he said. "We try to send a good message in a very joyful manner, a very pleasant, uplifting manner. People recognize that, and I think that's why they like it. It's not about any one of us in the group; it's about the relationship in the group and the people who listen to our music, and we're just going to try to keep that conversation going."

"The dynamics come from 12 years of traveling on the road together," McMurry said. "We've been playing together long enough now to pretty much know what everyone else is doing. It's more of a reflex action now than anything else. We love to get together and play together, so we've been very fortunate in that regard."

"Too bad most contemporary pop music doesn't have the organic elegance of Acoustic Syndicate."  -Vintage Guitar 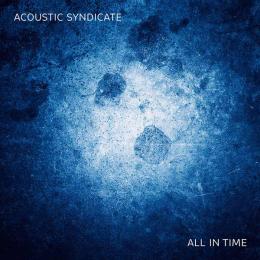