Jango Monkey plays original indie rock with emphasis on songcraft, uniquely blending classic rock, folk, prog, & improvisation. Quirky lyrics, strong melodies, & captivating instrumental interplay draw the listener in.
Imagine THE BEATLES with jams like the ALLMAN BROTHERS, song sensibilities like WILCO and the bigness of PINK FLOYD with an undercurrent of satire (a la' WEEN or ZAPPA). Despite its uniqueness, Jango Monkey has proven to offer up some very accessible music built upon the band's philosophical need to keep the experience fun. Spoiled brats, old Star Trek episodes, know-it-alls, and senility are delivered with tongue-firmly-in-cheek.

The band formed in Atlanta in 2004 and has developed an extensive regional following, playing dynamic live shows in the Southeast. The music is centered around the songwriting of Rob Platner with a core band that includes Tim Watts on bass/synth, Eric Martin on lead guitar, TK Thornton on drums, and Bill Kahler on keyboards and sax.

Jango Monkey has headlined multiple shows in the recent past including Jamfest sponsored by Terrapin Beer Co last year, and a benefit for Kenya at Kennesaw State U. The band was honored to be selected out of thousands of applicants to perform at the Atlantis Music Conference (2005) featuring many of the nation's best unsigned bands. Lead songwriter Rob has made several appearances at Atlanta's critically acclaimed Songsmiths Songwriter Series held at Smith's Olde Bar. The band has been selected to be profiled in the southeast edition of Performer Magazine, and the magazine Hittin' the Note this May.

Jango Monkey's current studio release was mastered by Rodney Mills (Pearl Jam, Gregg Allman, REM) and documents the depth of the band moving from quirky indie pop gems to extended jams, all while employing unique instrumentation (vibraphone, French horn, tuba) within the context of a rock orchestra. The CD is available on the bands website (among others) as well as ITUNES. 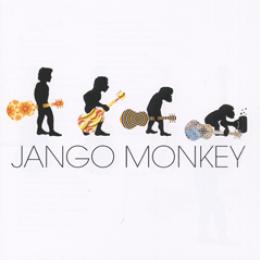