The Dynamites featuring Charles Walker - Burn It Down CD 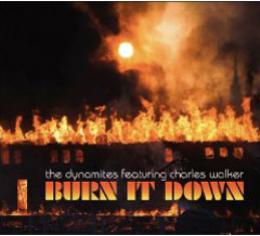 Soul music is here to stay, and it's still evolving. The DynamitesFeaturing Charles Walker are living proof. Lead singer Charles Walker doesn'timitate, emulate or try to resuscitate a bygone nostalgic era. He is soul, thereal deal, still carrying the flaming torch of funk and soul lit back in thelate 60's at the Apollo Theater where he opened up for icons like James Brownand Wilson Pickett.

Just as Ry Cooder thrust the nearly-forgotten Cuban heroes of son and bolerointo international fame on the album Buena Vista Social Club, so have TheDynamites proven that national treasures of soul and funk like Charles Walkerstill walk amongst us. What's more, the fresh songwriting approach of BillElder, a.k.a. Leo Black, continues to push the deep funk envelope, propellingWalker to sound equally at home singing a scorching hot, up-tempo rocker as hedoes on a heart wrenching 60's-style soul ballad.

The Dynamites aren't alone. The burgeoning wave of the deep funk and soulmovement is turning heads. A 2008 article in USA Today included The Dynamites inthe short list of "acts that are wowing live audiences coast to coast withfresh songs and slamming performances." The article also got it right inasserting the relevancy and freshness of the deep funk movement: "Thesecritically lauded acts aren't cover bands, paying homage to old heroes. They'recreating their own legacies in a genre that the industry seemingly shelved longago."

Apropos to being timely, The Dynamites second album, Burn It Down(out September 15, 2009), has something to say about life in 2009. From its rawopening notes, it wastes no time getting to the gritty heart of the matter:complacency has ruled the roost for too long and the old ways have got to go.Punctuated by staccato horn section bursts and Walker's intense proclamationthat "it's been a long time coming," the vibe evokes the ominous flames ofincendiary times. But this isn't about mere destruction, and vandals didn'tlight this fire. It's a song about moving on, and above all about clearingspace for a new day and new possibilities.

On the tune "Somebody's Got It Better (Somebody's Got it Worse)," TheDynamites take quirky syncopation, ala James Brown, to the brink. Backed by thepush and pull of Hammond B-3 organ and guitar licks that blend like pistons in awell-greased funk machine, Walker reminds us of the relativity of materialsuccess, in a world of haves and have-nots.

"Somebody Stop Me" showcases the band's deep 'Nawlins roots. With asecond line groove, playful horn lines, and keys reminiscent of a Dr. Johnclassic, the tune simply grooves hard. Lyrically, "Somebody Stop Me" couldbe mistaken as a plea for help for a man who's gone too far. But that wouldtotally misinterpret Charles Walker, the man, who in his 60's, is still at thetop of his game. Rather than getting stuck in the stereotypical mire of rockn' roll debauchery, Walker waves his finger in our face like a schoolboy,daring us to catch him if we can.

All in all, Burn it Down is a remarkably diverse album, coveringmusical terrain that crosses over decades and genres without sacrificing acoherent feel. Grooves that evoke the uplifting spirit of Curtis Mayfield like"If I Had Known," are scattered amongst tunes like "Do the Right Thing,"a hypnotic, bluesy strut dominated by a sultry baritone-heavy horn line. "TheThird Degree," whose frenetic ska influence and high octane vocal interplayshows not only that The Dynamites aren't afraid to explore unchartedterritory, but more importantly that they can do it with undeniable finesse.

Burn it Down is the follow up to The Dynamites' criticallyacclaimed 2007 debut release, Kaboom! Like Burn it Down, Kaboom!started with a potent wake up call called "Body Snatcher." The tuneunderscored the band's virtuosity while simultaneously dismantling itslistener's aural inhibitions. Also like Burn it Down, Kaboom!ran the gamut of funk and soul possibilities. A Boston Globe review said thealbum "comes across as nothing less than a new dictionary of old soul, hardfunk, and vintage R&B. It's both an update of, and a throwback to, a bygoneera."  Atlanta zine Stomp and Stammer called it: "one of thoserare recordings that manages to capture the dynamics of another place and time,while still sounding fresh and, well, just really damn funky."

Studio prowess aside, their commitment to being a hard working touring act,throughout Europe and the U.S., has solidified an international following. Whenthe band recently played the esteemed Austin City Limits Festival, a localjournalist urged attendance but cautioned to: "just make sure you know wherethe nearest defibrillator is." While their recordings capture much of theexcitement, seeing the band live takes the experience to a whole other level. AsWalker puts it: "You can only do so much on a record," he says."The performance is a lot different. I can't stand doing songs exactly thesame. I have to stretch out a little bit. That's part of my thing."

Bill Elder, the band's composer, guitarist and producer has made sure thatnothing was left to chance in creating The Dynamites' sound. Elder spent twoyears of composing and fine-tuning prior to unveiling the band onstage. In a NashvilleScene article Elder explained why creating their sound took time. "Themusic is put together in a very calculated way, though it doesn't necessarilygive that impression. Every piece has to be looked at from a spatial standpoint,a rhythmic standpoint. It's about every instrument having its own space to doits thing."

For soul veteran Walker, finding songwriter Bill Elder has been an epiphany.Importantly, he's found in Elder a songwriter that writes for his voice. Thisstands in sharp contrast to the days when he was asked to record songs whetherthey inspired him or not. "I didn't have the songs that I felt were rightfor me. Now I can pick and choose the songs I want to do. When I was with Chessand Decca I did what they wanted me to do." The result being that Walker ismore relaxed and at ease in the studio. "I feel so confident now. I canremember being under so much pressure to try and get a hit record. Now I'mjust in there doing what I like to do."

An essential authenticity comes across in The Dynamites music and message.Without a doubt, Burn it Down acknowledges that not all is right in theworld, but it doesn't get stuck there. Times might be rough and people mightbe grumbling about doomsday, but Charles Walker and The Dynamites are here toremind us that "it's a sunny day." Sure we could bitch and moan. But wecould just as well get down to some funky assed grooves and burn that negativitydown. 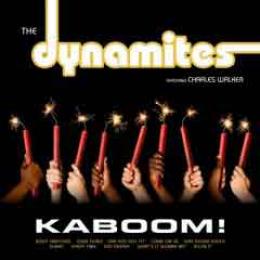