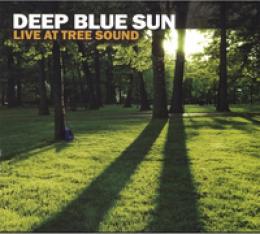 Deep Blue Sun is more than a 'jam band', it's the culmination of ten years and a thousand throw-down shows that are more like parties than performances. Formed in 1998 by Apple Peru members John Marsh (keys) and Katie Moore (guitar), the band is deeply rooted in the Georgia jam rock scene. The idea was to take west coast psychedelia, infuse it with southern-style funk, soul and improv--and to keep the crowd moving. And that's still what drives the band today. The six-piece line-up includes Ben 'Buddha' Hernandez (Freak the Jones) on bass, Ted Hoyer (Evan and Jaron) on drums, Steve Baird (The Grapes) on percussion, and relative newcomer Matt Lynn on lead guitar. Their intense dedication to song-craft, intricate harmonies and stylistic stretches are what set Deep Blue Sun apart, and the thrill of making music is what continues to inspire them to create fresh, exciting material.

They continue to move. From New Orleans to San Francisco; from London to Kingston; from deep, churning funk cuts to southern-fried chickin' pickin', it all works because each member of Deep Blue Sun knows that music is universal, and they each know their role in achieving the ultimate musical goal: The Get Down. 'The Get Down' is what continues to bring Deep Blue Sun opportunities to share the stage with bands and artists like The Derek Trucks Band, The Radiators, Dumpstaphunk, The Subdudes, Col. Bruce Hampton, Jimmy Herring, Warren Haynes, Karl Denson, Bob Weir, and Little Feat. It's also what inspires such an incredible force of friends and family from the Atlanta music scene, like Ralph Roddenbury, Donna Hopkins, Stop Drop and Roll, and Yonrico Scott, to share the stage with DBS.

Live at Tree Sound, their latest CD, is a snapshot of the band doing what they do best: playing to a live audience. Recorded in a single night at one of the premiere studios in the Southeast with a few hundred friends and fans in attendance, it features many of their newest originals, some previously unreleased staples from their repertoire, and a couple of rarely-played nuggets. This record captures all of the diversity, energy and spontaneity typical of a Deep Blue Sun performance. Live at Tree Sound was produced by Deep Blue Sun, engineered by John Holmes and mastered by Rodney Mills.
Released 2007
Genres:
Funk
Jamband
Rock